Founded 15 years ago after supermarket fire

The emergence of Cold Spring Farmers’ Market was the silver lining around a February 2002 fire that destroyed the Grand Union Supermarket. Its first season consisted of four vendors huddled in the parking lot of the defunct Butterfield Hospital each Saturday from late May into November.

The Saturday time slot hasn’t changed, but the market certainly has. Now a vibrant, year-round venture, it features some 30 farmers and producers from May through October at Boscobel at 1601 Route 9D in Garrison and from November to April inside the St. Mary’s Church parish hall at Main and Chestnut in Cold Spring. It is open from 8:30 a.m. to 1:30 p.m. at Boscobel but opens an hour later at St. Mary’s.

The farmers’ market was more than a reaction to the loss of a grocery store. It was part of a larger shift in how Americans think about food, what they buy and where they buy it. In 1994 there were 1,755 farmers’ markets in the U.S. Today there are more than 8,500, including several hundred in New York state. 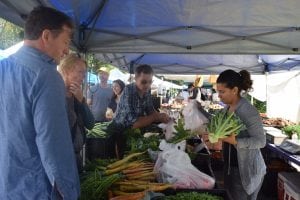 Shelley Boris was a founding board member of CSFM — the market operates as a non-profit — and is currently its vice president. (The other board members are treasurer Lithgow Osborne, secretary Liz Rauch, Deb Dichter, Lissi Erwin, Patrick Larsen, Carol Newman, Camilla von Bergen and Marc Weiss.) Boris said the market’s mission to support Hudson Valley agriculture is aided by retailers that sell local farmers’ products and by Community Supported Agriculture (CSAs).

She suspects many shoppers at the market have a CSA pick-up on Tuesday or Wednesday and then stop at the market on Saturday, so they have local products on their tables all week. The ready availability of fresh produce and food has “raised everyone’s expectations.”

In addition, she said, the market has become a community gathering place. “It’s a place to bring your dog, see your neighbors, get your knives sharpened and eat lunch from prepared food vendors” such as the newly introduced Farmers and Chefs Food Truck, she says. The market also has added homemade dog treats.

Some vendors are not at the market every week. See csfarmmarket.org for a schedule.

Susan Branagan, who is president of the board, feels the market owes its success to “beautiful products from great farmers and vendors — some of whom have been with us since the beginning,” including Four Winds Farm, Breezy Hill Orchards and EB’s Golden Harvest. Her one wish for the market? “For more of the community to come to meet our farmers.”

Tessa Dean and Zoe Markwalter, who both live in Beacon, joined the market as co-managers earlier this year and take turns running the show. 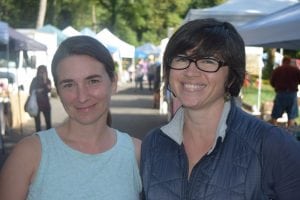 Asked what she likes most about the job, Dean said, “Knowing that I’m supporting local agriculture by helping farmers to sell their products.” It doesn’t hurt that she loves eating fresh food, or that her husband is a chef and teacher at the International Culinary Center in Soho.

She loves the work but admits it isn’t always easy. “Really hot weather is the hardest,” she said. “It can be very tiring and physically taxing.“ However, she enjoys the transition from summer to fall and the change in the produce being sold. “It’s a very nice time of year.”

Coming to the Market

Dean describes market customers as “very knowledgeable, very loyal and very local,” although there are a number of out-of-towners who stop.

Markwalter says she loves to watch the small businesses at work each Saturday especially because of her prior work in farming. “I volunteered at Common Ground Farm at Stony Kill Environmental Center,” she says, and also served on its board, including as president. While growing up in urban New Jersey, she had “no food connection. As an adult, I really wanted to change that.” 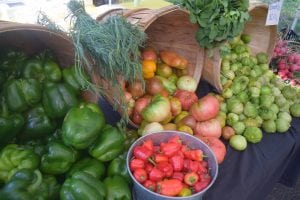 September is a colorful month at the farmers’ market. (Photo by M. Turton)

Facing the day at 5 a.m. on a rainy Saturday can be a challenge, she admits. She is a self-proclaimed “weather junkie” as market day approaches, relying on Weather Underground and Dark Sky.

She appreciates that those who run the market, the vendors and the customers share the same values. “What’s most remarkable is that it really is driven by the love,” she says. “This is not high-income generating — it’s not about money.”

Both managers would like to see more educational programs at the market, and Dean envisions increased collaboration with host Boscobel. “We’re in such a beautiful setting here … and they have a lot of great resources,” she said, citing Hudson River Estuary Essentials, a program led by Boscobel’s museum educator. Markwalter would love to add a composting program. Customers can submit their own ideas to [email protected]

3 thoughts on “Out of the Ashes, Farmers’ Market Thrives”