Board now complete with nine members, five of them new

Kristan Flynn, a marketing professional, and Craig Wolf, a retired journalist, have been appointed by the Beacon school board to fill the seats of Jose Munoz and Frank Garnot, both of whom resigned this summer.

The school board is again complete with nine members. Five have joined the board this year after three new members were elected in May.

According to guidelines issued by the New York State School Boards Association, the seats filled by Flynn and Wolf must be contested in May 2017. The seats held by Anthony White and Kenya Gadsden, who are the board’s president and vice president, will also be on the ballot. 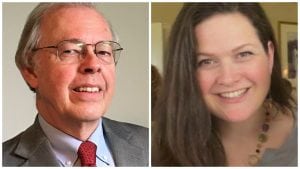 The board appointed Flynn and Wolf during its meeting on Sept. 26 after considering five applicants who included Frank Bugg, April Farley and Jonathan Griesing. Five board members voted for Flynn, with Gadsden and Georgia Patchen dissenting. Wolf was approved unanimously.

“He had a great vision of what Beacon is now and a positive vision for Beacon in the future,” board member Meredith Heuer said of Wolf.

Flynn and Wolf have both been regular attendees at school board meetings over the last year. Both also have been involved — Flynn as an organizer and Wolf as a member — with Advocates for Beacon Schools, a parent group that emerged in 2015 following a series of controversies involving district personnel.

Flynn “has a unique perspective,” said board member Antony Tseng. “To this day, I feel that one of the turning points of one of our old meetings was when we kept advocating for a certain point with the board [and] we kept saying it wasn’t personal, and she pointed out that it is personal [because] it’s our kids. She’ll be a great addition to the board.”

Parents, teachers, students and administrators all told the recruiting firm looking for a new superintendent for the Beacon school district that they would like a collaborative person who’s eager to build trust.

The search is now about six weeks old, and at the Sept. 26 meeting representatives from Hazard, Young, Attea & Associates (HYA) reported on the results of interviews and forums in August and September with stakeholders.

The underlying theme of the firm’s report, said Deborah Raizes of HYA, is that “you’re really looking for a real people person who can bring the district together. That’s the sense that we want to convey.”

The firm interviewed 65 people and 129 more contributed their views through an online poll, which HYA’s Edward McCormick characterized as a good participation rate. He noted that there, too, “the first thing that popped up on the list” were issues of trust and communication, more so even than professional experience.

Of the 129 online respondents, 68 percent said the priority — out of 25 possibilities — was finding a superintendent who could “foster a positive, professional climate of mutual trust and respect among faculty, staff and administrators.” Ninety percent of the teachers who took the poll ranked that trait highest.

The Beacon district has been without a permanent superintendent since Barbara Walkley resigned in January. She was the sixth superintendent, not counting interims, to leave since 2006. Ann Marie Quartironi, the district’s finance chief, has been acting as interim superintendent in the months since.

A detailed breakdown of findings can be found at beaconk12.org. The next step for HYA will be recruiting and interviewing candidates. The goal is to have a superintendent in place by Jan. 1.