With great fielding and hitting, the Philipstown 10U Fall Ball team was able to take the lead in the first inning and keep it until the end.

The team was paced by four stellar pitchers — Zackery Fox, Brendan Shanahan, Scott Bailey and Ty Collins. Batting highlights include a 4th inning triple by Jesse Tippit — a screaming line drive to center field. He then stole home giving us our 15th run.  In the 5th inning, our fielding included a snag of a fly ball by First Baseman Ty Collins. It also featured catcher Zachery Fox nailing a runner at the plate trying to steal home by applying a diving tag. 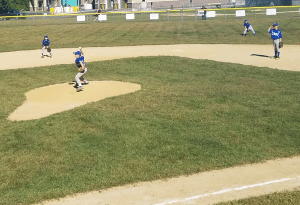 Every player on the team played hard and it was a total team effort that permitted such a convincing win. The next home game is Saturday, Oct. 8 at 11 a.m.

The 12U Fall Ball team won its first game of the season in extra innings. Falling behind 4-0 in the first inning and 6-2 in the second, they never gave up. Starting pitcher Hunter Erickson struck out three batters stranding runners at 3b in both innings to prevent further problems.

The comeback was sparked by clutch hitting up and down the batting order and wonderfully aggressive base-running. Our guys stole home three times. Pitchers Julian Ambrose and Dylan Gunther kept us close with four shutout innings while our hitters and runners pecked away finally tying the game in the 5th.

Our infielder played error-less defense. Second baseman Kevin Van Tassel made an outstanding play ranging far to his left into right field to snare a grounder and throw out the runner at first by a step – aided by first baseman Jordan Albertson’s stretch.

In the top of the seventh Ryan Merritt’s second hit of the day scored Julian Ambrose from third with the go ahead run.  William Bradley closed the game mowing down the opposition 1-2-3.

Our next game is Saturday, Oct. 1 at 1 p.m. at the North Highland Field.