Chargers Battle Terminators to a Draw

The Philipstown Boys U16 Chargers were on the road Sunday to face-off against division rivals, the Dover Terminators.  The Chargers came ready to play with a game-plan in place to generate goal scoring opportunities, and that they did. 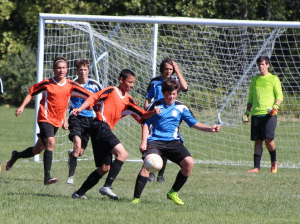 The U16 Chargers – from left, Freddy Osborn, Quinn Petkus, Collin Eng-Wong (with ball) and goalkeeper John O’Donnell – tied the Dover Terminators, 5-5, in a game on Sept. 25. (Photo by Laura Hammond)

Early in the game, Fred Osborn fed a pass to Kyle Mayo, who deployed a shot to the opposite corner past a diving Dover keeper, putting the Chargers up 1-0.  Soon after, Rex Young placed a corner kick to the waiting hoard in front of the goal, where Osborn was able to power in a goal of his own, Chargers up 2-0.  After Dover put a goal on the board, the Chargers came back when Alek Maasik sent a through pass to Hudson Lovell who made a great spin move and quick-shot on goal.  Elias Henderson had a great first half controlling the midfield, and fed a pass to Mayo who was able to notch his second goal from 25 yards out, 4-1 Chargers up at the half.

Dover came back with a vengeance in the second half, and was able to score several goals quickly. Mayo slowed down the Terminators momentum when he took the ball straight down the field, scoring his hat-trick goal. With the score 5-4, Dover started taking shots from all over the field, but Chargers keeper John O’Donnell made some great saves and was up to the challenge.  One lofting Dover shot from 30 yards out dropped in bringing the score to 5-5 at the final whistle.  The Chargers fought a tough battle against their foe, and had much to celebrate with this five goal effort.

The Philipstown Boys U14 Warriors headed south to play the Spirit of Mount Vernon Lightning in the team’s first win of the season. The Warriors took the field on the offensive with middie, Gus Grossman passing to strikers Zachary Cannova and Paolo Coumans who took numerous shots on goal. Defenders Charlie Keegan and Pelle Sandlund made some strong blocks while Owen Edelson fought for possession. The Lightning continued to challenge the defensive line and broke through to score their first goal, quickly followed by a second. Christian Moreno used his speed to bring the ball back to the Lightning net. After a hard fight, Moreno scored the Warriors’ first goal of the day. Daniel Carlos, John Weatherup and Moreno kept up the offensive assault, while Luca Van Dommele worked to stop the ball on defense but the Lightning recovered, scoring their third goal. Before the end of the half, Moreno scored again for the Warriors, going into the half down by one.

Keegan manned the goal in the second half and prevented the Lightning from scoring again with help from defenders Graeme McGrath, Edelson, Coumans, and Sandlund.  Moreno scored his final goal from midfield for the hat trick. Middie August Lee provided defensive support allowing Carlos to score Philipstown’s fourth goal. The final whistle saw a 4-3 score sending the Philipstown Warriors home with a win.

The Philipstown Boys U13 Arsenal team hosted the Poughkeepsie Igniters Sunday.  Arsenal continued to impress onlookers as the team moved the ball around the field with two-touch passing. The excellent Philipstown defense of goalkeeper, Chase Mayer and defensive backs, Patrick DiNardo, Rowen Kuzminski, Roy Smith and Aidan Sullivan-Hoch were dominant in the backfield, keeping Poughkeepsie at bay for most of the first half.

At the eight-minute mark, Colin August chipped the ball to Ryan Eng-Wong who put away Philipstown’s first goal. This was followed by a well-placed corner kick by Jasper Drake that was headed from Tomas Struck to Eng-Wong who notched his second goal as he blasted a shot from the far post. Struck then dribbled down the wing, turned and passed to teammate, Matthew Nachamkin who launched a shot over the keeper’s hands. Next, Arsenal’s Danny Urbanak dished the ball to Eng-Wong who put a beautiful finish on the ball for the hat trick.  Arsenal struck again when Colin August blasted a shot for Philipstown’s fifth unanswered goal of the half.  Poughkeepsie, a stronger team than the score suggested capitalized on a brief defensive breakdown to bring the score at halftime, Philipstown 5, Poughkeepsie 1.

Early in the second half, August displayed exceptional teamwork as he won the ball and sent a crafty through pass to Evan Maasik.  Maasik cut through the defense and scored in the right corner of the Igniters’ net. Less than a minute later, Maasik took another shot on goal and Chase Mayer collected the rebound to put away Philipstown’s seventh goal.  Stephen Robinson and DiNardo continued to pressure on the attack and DiNardo sent a cross to teammate, Stefano Hammond who drilled a shot home for Philipstown’s eighth and final goal. Arsenal’s Danny Urbanak had his debut in goal and he impressed the fans with numerous saves and excellent distribution, notching a shutout in the second half with the final score, Philipstown 8, Poughkeepsie 1.

Good weather, great teamwork, and some fancy footwork all contributed to a stellar game for the Philipstown Boys U11 Strikers on Sunday. The team kicked off with confidence against the New Paltz Griffins and took an early lead in the first half, thanks to a goal by Frankie DiGiglio. The team’s offense exhibited strong passing skills, while Liam Gaugler and Jake Thomas stood out on defense as they worked together to keep the ball in offensive territory. Coach Danielle Pack McCarthy rotated her players and the strategy paid off, as Thomas moved to offense to score the second goal of the game. The Strikers went into the half up 2-0. Throughout the game, New Paltz had several shots on goal, but many were deflected by the Strikers’ defense and by goalie Ronan Kiter, who read the ball beautifully. The Griffins made an impressive goal later in the half, but Philipstown forward, Trajan McCarthy came on strong at the end of the game with two back-to-back goals, bringing the final score to 4-1, Philipstown Strikers.

Force Hangs on to 2-2 Tie against East Fishkill

What a way to celebrate his 8th birthday, as Force goalie, George Stubbs made impressive save after save to hold down a 2-2 tie for the Philipstown Force Boys U9 team as they faced the East Fishkill Warriors. The rookie goalie aggressively jumped on East Fishkill’s shots on goal, and was supported by a strong offensive performance by Roth Westphal, who had two goals for the day, including a penalty shot. Owen Powers ran nonstop at midfield, running quickly forward with fast breakaways and short passes towards goal. After the game, this young team showcased their true love of the game, celebrating Stubbs’ birthday with a backyard soccer scrimmage!

Under blue autumn skies, the Philipstown Boys U8 Storm defended against the East Fishkill Cobras with a vengeance, but the East Fishkill team proved too resilient. Goalkeeper Connor Keegan held the fort with deft blocks, however, the Cobras managed to score three goals by halftime. Knox Gary, Alex Gaugler, Joseph DeMarco, Langdon Johnson, Griffin Lucca, Elias Moran, and Lenny Wolfe, all hustled and made a remarkable effort. The defense made some wonderful saves and the combination of Oliver Sanders, in his debut, and Rhys Williams almost resulted in the Storm’s first goal, final score, 6-0 Cobras.

Having played their first two opponents close, but with no points to show for it, the Philipstown Girls U13 Raptors reversed their fortunes by beating a tough, but less experienced LaGrange squad, 4-0.  The Raptors had three players out with injury or illness, so they fielded ten players without substitutes and LaGrange showed great sportsmanship by playing ten players as well.  The Philipstown defense led the Raptors to victory, led by goalkeeper Dosi Weed, who made several saves, including coming out to beat a LaGrange breakaway in what would otherwise have been a point-blank shot.  Mazzie Maxwell, Sophia Scanga, and Maya Osborn were their usual dependable selves, pressuring the LaGrange forwards, and helping to make this an easier day for Weed.  Zoe Harris, Ella Ashburn and Brynn Martin controlled the middle of the field, keeping the ball in the Raptors’ half.

While the defense kept LaGrange off the board, the Philipstown strikers actively created scoring opportunities.  Bianca Harmancin took several strong corners, including one that just missed a diving Martin, but it was forward Katie Shields’ perfect cross to Harmancin that led to the Raptors’ first goal.  Leading 1-0 after the half, the Raptors kept the shots coming, and a hustling Emilia Osborn scored twice on rebounds off of post-hitting shots by Harmancin and Harris, respectively.  The scoring ended with Harmancin converting a penalty shot in the final minute for her second goal of the game. The 4-0 Raptor victory was their first following their promotion to the League’s second division.

The Philipstown Girls U12 Phoenix played another intense match Sunday against the Southern Ulster Snow Leopards. The Phoenix put pressure on Southern Ulster from the start with Vanja Booth, Caroline Nelson, Clara Tripp, and Finola Kiter leading an aggressive effort. Kiter and Nelson both had some great breakaway opportunities that they just couldn’t put past Southern Ulster’s keeper. Both teams were strong in the defensive end, leading to few scoring opportunities on either side. Maggie Gordineer was strong in net for the Phoenix and had Josie Foley-Hedlund, Walker Tinsley, Isabella Lukic, and Kate Meisner as a rock-solid defense in front of her. At the end of the first half the match was scoreless.

New energy in the second half provided by attackers Amber Skye-Korcz, Megan Ferreira, Morgan Serrand, and Dylan Ambrose helped the Phoenix create more chances, but not enough to tally a goal. Eventually, Southern Ulster broke through to score two goals. Second-half keeper Ruby Poses did all she could in goal and made an outstanding diving save to keep the game close. Though the 2-0 loss wasn’t the result they wanted, the Phoenix were proud of the effort they put forth.

The Philipstown Girls U9 Hawks traveled to LaGrange this week to meet the U9 Twisters. The Lady Hawks are in their first season under coaches Ralph Moran and Michael Robinson and the encouraging coaching environment has helped develop strong soccer skills in these young ladies. Philipstown played with grace under pressure and displayed exceptional comradery among the teammates. 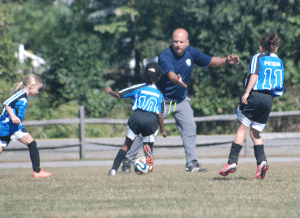 This week the girls exhibited great clearing skills on defense, strong passing skills throughout the game and dominated ball possession, especially in the second half.  Goalkeeper, Ava Vasta had multiple saves in the goal and Jessica Tutor scored the team’s only goal of the game, bringing the final score to Philipstown 1, LaGrange 2.