The Beacon High School varsity football team trailed 21-14 at home on Sept. 24 with three minutes left against Byram Hills when, on fourth and 12, Alex Benson caught a 50-yard pass from Jaden Novarro that took the Bulldogs to the 3-yard line. Andre Davis ran the ball in, making the score 21-20, but Beacon’s extra point attempt was blocked.

On its ensuing possession, Byram Hills drove to midfield where it stalled with just over a minute left, facing a fourth and two. Hoping to run out the clock, the Bobcats went for the first down, but the runner fumbled. The Bulldogs’ Manny Garner scooped up the ball and returned it for the winning score. 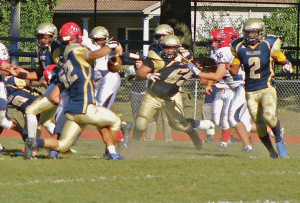 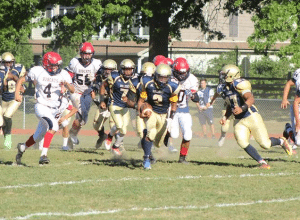 … and is scooped up by Manny Garner (2), who returned it for the winning touchdown (Photos by Rem Dinio)

Meanwhile, on the Haldane turf in Cold Spring that same afternoon, the Philipstown Hawks third-and-fourth grade team took on the Tuckahoe Tigers. With four seconds left and the game tied, the Hawks’ Hunter Erickson threw a perfect pass to Asa Miller, who ran 82 yards for the score and an 18-12 win. 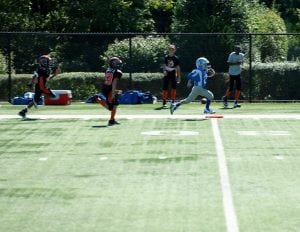