Some are historic, others less than creative

Parents are known to think long and hard before naming a baby. Its influence could last for generations.

Street names last a long time too, but how much thought goes into them? When a street is born, do community leaders wring their hands, worrying about whether the selection will sit well with voters? Do they pour through street-naming books or streetnames.com for suggestions? Or do they pick names out of a hat? 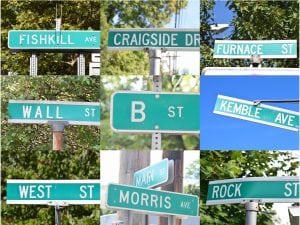 A few of the most well-traveled – and/or mysterious – street names in Cold Spring (photos by M. Turton)

Some street names salute events in history. Others pay homage to community icons. Still others show no hint of creativity whatsoever. A few are puzzling, even mysterious.

The Current conducted exhaustive research into how some of Cold Spring’s street names came about, excepting names such as Pine, Cedar and Oak, which we suspect have something to do with trees. Here are a dozen that stood out:

This name for the principal road in a village is common but far from the most popular street name. That honor, according to the National League of Cities, goes to Second Street, with 10,866 occurrences in the U.S. Main Street comes in seventh. In what sounds like an Abbott & Costello routine, Third is second, First is third, Fourth is fourth, Fifth is sixth, Sixth is eighth and Seventh is tenth. Park is fifth and Oak is ninth. Questions as to who is on First and what is on Third remain unanswered.

This street honors George Pope Morris (1802-1864), a poet songwriter, essayist and newspaperman. The Cold Spring resident is best known for his poem, “Woodman, Spare That Tree!” (“Woodman, spare that tree! / Touch not a single bough! / In youth it sheltered me, / and I’ll protect it now.”)

There are two hypotheses: at one time this was the financial center of Cold Spring or it is named for the aesthetically pleasing stone wall that runs along its upper section, which seems more likely. 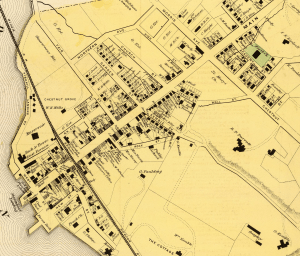 Detail from an 1868 map of Cold Spring (Rumsey Collection)

The street that leads to the Haldane campus was once the driveway to Cragside, the estate of Julia and Daniel Butterfield. He was a general in the Union Army and credited with having composed “Taps,” and she bequeathed the funds used to build the Butterfield Library and Butterfield Hospital. As often happens, the name of the estate was corrupted when the street was named.

Cold Spring’s mystery street. It is not between A Street and C Street, neither of which exist. One hypothesis is that the first families to settle on the street each had surnames that began with B (an 1868 map shows Baxter, Bliss and Butler among the seven residents of the unnamed street).

The street points toward the West Point Foundry. Nearby Parrott Street is named for Robert Parker Parrott, a West Point grad who was superintendent of the foundry and invented in 1860 what became known as the Parrott rifle. His estate was north and south of Wall Street; at the end of the Civil War he donated the land for the construction of St. Mary’s Church, which was completed in 1868.

The most western street in the village.

Unlike nearby Fishkill Avenue, which is now a dead end, at least Fishkill Road takes you toward Fishkill.

This street commemorates Gouverneur Kemble (1786-1875), a two-term Congressman who was the driving force behind the construction of the West Point Foundry.

Named for Gouverneur Paulding (1829-1913), a prominent resident and nephew of Gouverneur Kemble, this was one of the first neighborhoods in the village.

Named for the impressive rock outcrop along its south side.

Toronto residents scratch their head about a street named Avenue Road. Cold Spring has The Boulevard. Shouldn’t The Boulevard include a descriptor such as  Washington in honor of the time the president spent in the village? _________ Boulevard. How would you fill in the blank?