At a Sept. 26 press conference at the Cold Spring riverfront, Putnam County officials and representatives from two regional environmental organizations spoke out against a plan to increase the number of oil-carrying barges on the Hudson.

The plan, which requires U.S. Coast Guard approval, was proposed by the Maritime Association of the Port of New York and New Jersey and the American Waterways Operators earlier this year and calls for 43 new anchorage spots between Yonkers and Albany, including space for up to five barges between Beacon and Newburgh, which the Maritime Association describes as “a major petroleum distribution center and prime deep-water port.”

Putnam County Legislator Barbara Scuccimarra, who represents Philipstown, said the scale of the proposal is a serious problem. “We’re not talking a few” barges, she said. “We’re talking a mile of barges. Not only are the barges parked there, they’re unlit and unmanned,” which could impact the environment, tourism, boating and fishing.

Scuccimarra noted that in 1963 a proposal to construct a hydroelectric plant on Storm King was defeated due to the efforts of community activists. “I’m hoping that will happen again,” she said. 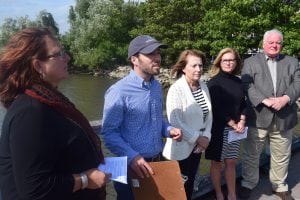 Proponents of the project have cited safety concerns. The American Waterways Operators argues there is not enough anchor space on the river, which forces captains to push through to Albany and limits the number of barges that can travel the river.

Jeremy Cherson of Riverkeeper noted that adding anchorage would mean more oil will be transported along the Hudson, especially with the recent lifting of the ban on the export of American crude oil and hydraulic fracturing in the Dakotas. In addition to the risk of spills and navigation hazards, he said anchoring can cause damage to the bottom of the river, a habitat that supports two endangered species, the Atlantic and shortness sturgeon.

Cherson also questioned whether the barge proposal would be consistent with waterfront revitalization plans adopted by Hudson River communities. (Cold Spring’s draft plan is yet to be approved, pending an update of the zoning code.)

Althea Mullarkey of Scenic Hudson argued the industry views having more anchorage spots as a way to warehouse crude oil on barges. “That’s not what the Hudson River is meant to be,” she said. “Tourists do not come to visit warehouses or large parking lots.” She said even a minor oil spill could impact drinking water and wildlife habitat. “We are bearing all the risk and getting none of the benefits.”

Putnam County Executive MaryEllen Odell said she expects the legislature at its Oct. 4 meeting to pass a resolution opposing the barge plan. “We have to make sure that the last 50 years of good work that’s been done to restore and rehabilitate the Hudson River has not gone unnoticed,” she said.

The Coast Guard is accepting public comments about the proposal through Dec. 6. Based on a sampling of the more than 2,900 comments collected so far, the vast majority of respondents from up and down the Hudson oppose the proposal.