Spectra continues to plow ahead with its Algonquin pipeline project in spite of massive public protest, many citizen arrests and the protests of federal and local officials who are trying to prevent a catastrophe.

Spectra aims to open the pipeline on Nov. 1 and start pumping fracked gas through a 42-inch diameter pipe that runs 105 feet from Indian Point, an old, leaking, dangerous nuclear plant sited one mile from the intersection of two earthquake faults in the Hudson River.

Two safety inspectors who worked on the proposed methane gas pipeline say Spectra cut corners when it came to project, worker and environmental safety. Last year Paul Blanch and Richard Kuprewicz presented their findings to Nuclear Regulatory Commission officials that showed the NRC had based its safety assessment of the project on a calculation that was partially handwritten, unapproved, undated and unsigned and used fictitious, false and unsupported assumptions. 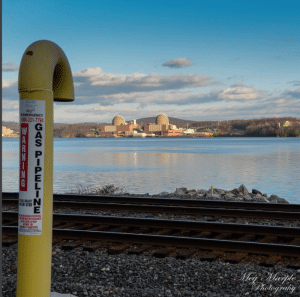 A view of the Indian Point Nuclear Power Plant from Rockland County with an Algonquin Pipeline marker. (Photo by Mey Marple)

This misleading “calculation” threatens the safety of more than 20 million residents and the infrastructure of the greater New York metropolitan area, and is risking trillions of dollars of damage and possibly the U.S. economy. It must be invalidated and the construction halted until an independent, transparent, structured risk assessment, as outlined by the Occupational Safety & Health Administration (OSHA), is completed.

Spectra’s law-breaking and environmental irresponsibility is placing many millions of lives on the line. Our senators and representatives must protect their constituents by pushing the Federal Energy Regulatory Commission to issue a stop-work order.

One thought on “Letter: Stop the Spectra Pipeline”