After a series of jobs ranging from police dispatcher to personal assistant, followed by motherhood, Kim King wasn’t sure precisely what she wanted to do next. But she knew she wanted to be her own boss.

Enamored of the east end of Beacon, she decided to open a store. Despite having no experience in retail, she followed her instincts. Nearly six years later, her experiment, Lauren & Riley, is still going strong. 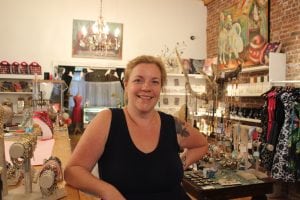 Kim King, owner of Lauren & Riley (Photo by A. Rooney)

“I love this end of town, and this space at that time had been empty for two years,” she says. “It’s a great space and we’re hanging in there.”

While attempting to keep her stock unique, at least to the east end, King has filled Lauren & Riley (named for her daughters) with clothing, accessories, teas, socks, sunglasses, soaps and lotions, all with a slight emphasis on the funky.

“With most of the clothing, I only get six per style — two smalls, two mediums, two large — and I never get anything twice, with the exception of a different color,” she says. “So I tell people if they like it, now’s the time to get it.” A section of special occasion dresses has a vintage feel to it, though the clothing is new — a vibe which extends somewhat to the store as a whole. 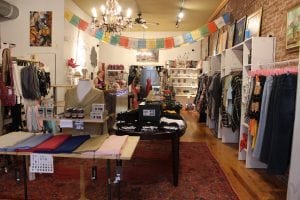 The interior of Lauren & Riley (Photo by A. Rooney)

King finds her merchandise at trade shows and Etsy and also by happenstance, including items worn by customers. “The tourists are the weekend foot traffic, but it’s the locals who keep me going,” says King, who tries to keep her prices reasonable for that reason. “There are very few items over $100.” She keeps a number of good gifts on hand because people often want to purchase a present that doesn’t need to be tried on, such as scarves and jewelry.

Her store has sections for children and ties and flannel shirts for men. (King says she is asked constantly if she has men’s clothing, and she is inching slowly into that area, as well as messenger bags.) There are pants and candles, perfume, shoes, bras and camis, even parasols hung artfully from the ceiling. The warm space, lined with exposed brick and burnished wood floors, is frequently decorated, something King particularly enjoys.  There are paintings by local artists lining the walls, evoking a gallery. 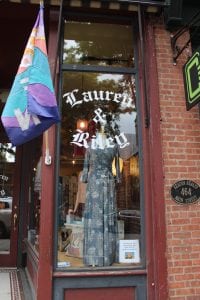 Lauren & Riley has been located on the east end of Beacon’s Main Street for nearly six years.  (Photo by A. Rooney)

King says she has definitely “felt the Beacon boom. It gets better and better, with more people moving into the area. Beacon’s blown up, which is great in many ways, but I’m always aware of those who have been here for a long time too and I try to have things here for that community too.”