Chargers Edge Beacon United – After a 5-goal effort last weekend the team was looking to build on its success and they did with a close win against the Beacon United. From the opening kickoff the Chargers showed their passing prowess and ball control. Elias Henderson managed the middle of the field at stopper, and Quinn Petkus, Rex Young, Hudson Lovell, Ben Strol, and Collin Eng-Wong provided a solid defensive effort. The defense was backstopped by an outstanding display of goalkeeping from John O’Donnell, who collected 18 saves on the day. Midway into the first half, Eng-Wong sent an indirect kick across the eighteen-yard box to Kyle Mayo for a fantastic header goal on the set-play. Beacon tried in vain to get past the Chargers keeper before the end of the half, and the score remained 1-0 when the whistle blew. The second half saw more of the same aggressive play from both sides, and the Chargers did a great job of maintaining their composure. Eng-Wong had another opportunity with an indirect kick and capitalized again with a cross to Fred Osborn who knocked in the second Chargers header of the game. Beacon continued to apply pressure as the clock wound down, but the teamwork of the Chargers and some fantastic diving saves by O’Donnell kept the Chargers on top for a 2-1 win.

Warriors Show Progress in Loss – When the Philipstown Boys U14 Warriors faced the Latinos de Pok Deportivo Sol last year, the outcome of the game was decided within the first few minutes. Playing them at home this week was a tough game but the Warriors held them off for a longer portion of the game with much improved defense. Defenders Luca Van Dommele, Daniel Carlos, Paolo Coumans, Charlie Keegan and Owen Edelson used heads, knees and feet to prevent the Latinos from getting through the defensive line while goalie Graeme McGrath stopped the ball with catch after catch. In the offense, middies John Weatherup and Gus Grossman brought the ball to strikers Christian Moreno and Zachary Cannova but the Latinos intercepted it. Short one man, the Warriors fought hard for the ball but the Latinos were up by six at the end of the half. The second half opened with the seventh goal by the opponents and the mercy rule took effect. The aggressive assault continued through the half even without the chance to score and the game ended with a loss of 7-0 for the Warriors.

Arsenal Suffer First Defeat of the Season – The Philipstown Boys U13 Arsenal entered their match with the Rhinebeck Raptors 3-0 on the season but took their first loss, 2-1. Philipstown started the match a little slower than usual but still held strong through good goalkeeping in the first half from Danny Urbanak and continued solid defensive play from Aidan Sullivan-Hoch, Patrick DiNardo, David Tacuri, and Roy Smith. Towards the end of the first-half, Arsenal started to play more of its passing game. Four minutes before halftime, Colin August played a smart ball from midfield to Evan Maasik who beat a Rhinebeck defender and then shot towards the goal. The Rhinebeck goalie made a good save but the ball fell to Ryan Eng-Wong who was well positioned to tap the ball in for the first goal of the game. 1-0 to Arsenal at the half. Arsenal started strongly in the second-half with better teamwork as the midfield consisting of Matthew Nachamkin, Rowen Kuzminski, Stephen Robinson, and Tomas Struck who started looking for each other more with a good mixture of short and long passes to their forward, Stefano Hammond. Despite maintaining a majority of the game’s possession and outshooting Rhinebeck by at least 15-5 which included both a shot off the post by Chase Meyer and the crossbar being hit from a 12-yard shot by Colin August, Rhinebeck equalized with about 15 minutes left. A long ball from the midfield by Rhinebeck created a one v. two situation which the Rhinebeck forward handled well and finished his shot off the post and into the top right hand side of the Arsenal goal. Approximately five minutes before the end of the game, Rhinebeck had a corner which lofted into the Arsenal six-yard box. Philipstown cleared the ball but it hit an Arsenal defender and trickled back over the Arsenal goal line to give Rhinebeck a 2-1 victory. It was a tough first loss for Arsenal but with any loss there are many things to learn. Rhinebeck deserves credit for their ability to stay in the game which was assisted by great goalkeeping and scoring on their few chances. Arsenal returns to action on October 16 against Orange County.

Strikers Extend Streak with 8-1 Win – The Philipstown Boys U11 Strikers hit the road once again on Sunday to battle the Liberty Diablos in Monticello, NY. Speed and agility, communication, and footwork all contributed to a well-deserved win for these young players. Jeremy Hall sent through the first goal early in the half, followed soon after by Trajan McCarthy, who had two goals in quick succession, and was aided by an impressive assist from Liam Gaugler on the second. 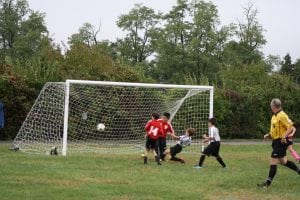 Trajan McCarthy scores one of his two goals on Oct. 2 for the Philipstown Soccer Club’s U11 Strikers (Photo by Patrice Delabie)

The defense remained steadfast against the Diablos, allowing Max Westphal to pick up the fourth goal of the game. Goalie Ronan Kiter closed out the half with a beautiful save, and the team went into halftime up 4-1. Throughout the second half, the players showed impressive ball control and crisp dribbling and passing. Frankie DiGiglio struck with the fifth goal for the team, and Jake Powers earned his very first goal of the season next. Colin Delabie moved the ball gracefully down the field to score the seventh goal of the game, and Hall came on strong with a chip into the net for the 8th and final goal. Kiter managed another beautiful save toward the very end of the game, and at the whistle, the team came away with the “W,” bringing their season record to 4-0. 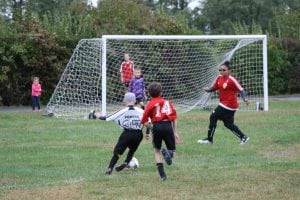 Jake Powers dribbling toward the goal on Oct. 2 for the Philipstown Soccer Club’s U11 Strikers. (Photo by Patrice Delabie)

Philipstown a Force to be Reckoned With in 5-0 Win – The Force may be a new team this year for the Philipstown Soccer Club but they play like they’ve been around for a long time. With only one loss through four games, this week they outmatched a talented East Fishkill team and grabbed a 5-0 victory. George Stubbs had a clean sheet in goal and plenty of help on defense from Owen Sullivan-Hoch and Lucky Bell. The offense saw from Anthony Bailey, Owen Powers and Bryce O’Halloran as the result of penalties. O’Halloran rocketed a shot from outside the box that the goalie got his hands on but couldn’t stop. Powers and Bailey each had exciting penalty kicks that they were able to get past the goalie. O’Halloran added another goal in regular play and the scoring was topped off by a break away goal from Roth Westphal. It was a great win for the Force and Coaches Danielle Pack McCarthy and Dirk Westphal were happy to go into the Columbus Day break on such a high note.

Philipstown Storm Subdued by Beekman Rebels – The Beekman Rebels handed the Philipstown Boys U8 Storm their 4th loss of the season by a score of 5-0. The scoreboard did not reflect the brilliant performance by the Storm. Rhys Williams, the second half goalkeeper, swatted balls out like flies. Showing true grit and total determination to possess and control the ball, Storm players such as Griffin Lucca, Connor Keegan, Parker Larsen, Joey DeMarco, Elias Moran, Oliver Sanders, and Lenny Wolfe made beautiful passes and attempted a few well crafted breakaways that unfortunately didn’t produce a result. Lucca, Knox Gary and Alex Gaugler held down the defensive fort. It was a thrilling game and there was much to cheer for in the spirit of the Storm, which never quits.

Phoenix Fight Red Hook Storm in Close Match – The Philipstown Girls U12 Phoenix played a solid match on Sunday against the Red Hook Storm. In the first half, the defensive line of Isabella Lukic, Josie Foley-Hedlund, Kate Meisner and Walker Tinsley helped push the ball up the field. The offensive line of Vanja Booth, Delaney Horan, Caroline Nelson and Finola Kiter put pressure on the Red Hook defense. The Phoenix got on the board with a direct kick from Vanja Booth that sailed over the Red Hook keeper. Maggie Gordineer turned in another solid performance in the net with multiple saves against the Red Hook offensive line, including a diving save to end the half at 2-1, Red Hook. In the second half, the Phoenix fought hard but couldn’t find the back of the net again. Ruby Poses was very strong in goal with an especially exciting acrobatic leap to stop a Red Hook scoring opportunity. Megan Ferreira and the rest of the Phoenix defense made it difficult for the Storm to break through the line. Clara Tripp, Amber Skye-Korcz, Morgan Serrand and Dylan Ambrose had several breakaways but the Red Hook defense was tireless in its efforts. Red Hook took the match 5-1 but the Phoenix were proud of their efforts.