Will have nearly 10 times more space at former rectory

After years of searching for a new home, the Beacon Historical Society, in tight quarters at the Howland Cultural Center, will move early next year to South Avenue, south of the Bank Square Coffeehouse, to a house that was formerly the rectory of St. Andrew’s Episcopal Church. The relocation will expand its space nearly 10 times, to more than 2,000 square feet from about 225, allowing the society to host its own exhibits and add a research library and storage space.

Site plans have been completed, with only minor modifications required, such as a ramp for handicap access. “It’s moving along quickly and we’re extremely excited,” said Diane Lapis, a society trustee. “The building is in beautiful condition, with big windows, great light and lots more space, including two rooms on the first floor and four large rooms on the second. There’s even a garden out back. Now we’ll have space for group tours and can have children come in. We’ll also have the opportunity to be able to accept more donations, particularly furniture.” 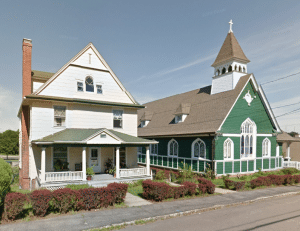 The new home of the Beacon Historical Society (left) at 17 South Ave. is the former rectory of the adjacent St. Andrew’s Church. (Google Maps)

To pay for the move, the increased rent and its many programs, the society has organized a series of fundraisers over the next few months. The first is an exhibit called Hats Off to the Beacon Historical Society at Beacon Bath & Bubble at 458 Main St., where it will reside for the month before expanding across the street to the Howland Center.

Hats Off celebrates both Beacon’s hat industry and the society’s 40th anniversary. The hat industry began in Beacon around the time of the Civil War and operated until 1960; at its height it was the second largest hat-making center in the country, after Danbury, Conn. Following in the tradition of Newburgh’s Lightbulb project — a public art initiative now in its third year — Hats Off offers artists free rein to paint, decorate and interpret wooden, hat-shaped cut-outs that each measure two feet across.

More than 50 artists participated, and about half of the contributions are on display at Beacon Bath & Bubble. Many artists made inventive use of  materials, such as one hat that depicts the Madam Brett Homestead with small pieces of glass, another that used nails in an homage to the Tallix foundry, and a third honored the city clock and functions as a clock itself. Every contribution will be on view at the Howland Cultural Center at 477 Main St. from Saturday, Nov. 5, through Nov. 27. An open house is scheduled at the store on Second Saturday, Oct. 8, from 6 to 9 p.m. 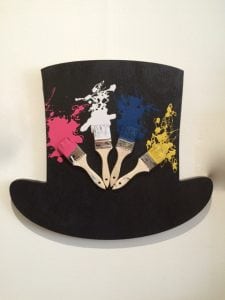 A hat cut-out by Rick Rogers

The Society is asking anyone who worked or had family members who worked at a Beacon hat factory and has a story to share to email [email protected] by Oct. 19 with “Hat Factory Story” in the subject line. Or stop by the Howland Center when the Society is open, 10 a.m. to noon on Thursday or 1 to 3 p.m. Saturday, or call 845-831-0514.

In addition to the cut-outs, the Hats Off exhibition will include displays, each curated by a society trustee, on Beacon soldiers during World War I; banking; the Van Tine’s Stationery Store; African-American stories; Alexander Hamilton’s connection to Beacon; the Highland Hospital; and, of course, the hat industry. Admission is free. From 1 to 5 p.m. on Nov. 5, the hats and other goods and services donated by the community will be offered during a silent auction at the Howland Center. Successful art bidders will be able to retrieve their purchases at the end of the exhibit later in the month. 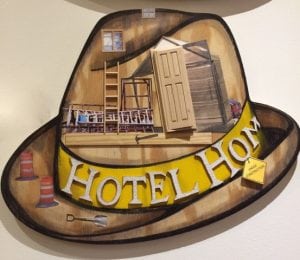 On Saturday, Oct. 15, the society will conduct two Taste of History walking tours of the east end of Main Street. Departing at 1 and 2 p.m. from the Howland Center, guides will explore the people, buildings, factories and stories from when the east end was called the Village of Matteawan. Desserts will be served at the conclusion of the walk from the Highland Hospital Cookbook, published around 1900, a reprint of which can be purchased from the society at its gift shop, open during its meetings and special events. Each tour costs $15.

Another fundraiser, this one a social lunch at 11:30 a.m. on Sunday, Oct. 30, will take place at the Outback Steakhouse on Route 9 in Wappingers Falls.

Although its meetings are typically packed, and a core of about 20 people help out consistently, the society says it will need more volunteers for the move as well as for education programs, acting as docents, fundraising, painting — the works. The site search committee worked on finding a home, negotiating the lease, completing a site plan and will help to prepare the space. “The synergy on all of this is fantastic,” Lapis said. “We just want more people to be a part of it.”

HOW WE REPORT
The Current is a member of The Trust Project, a consortium of news outlets that has adopted standards to allow readers to more easily assess the credibility of their journalism. Our best practices, including our verification and correction policies, can be accessed here. Have a comment? A news tip? Spot an error? Email [email protected]rg.