Walking to Albany to demand funds, including $4 million for Beacon

An advocacy group that says New York State owes its public schools nearly $4 billion — including $4 million coming to the Beacon school district — stopped in the city on Oct. 5 at the 65-mile mark of its walk to Albany, as local officials and residents urged state legislators to make good on promises they believe are a decade overdue.

The Alliance for Quality Education (AQE) — a coalition of grassroots education groups — organized the 150-mile walk from New York City to Albany to mark the 10th anniversary of a state Court of Appeals decision that found New York State was deliberately underfunding schools in black, Latino and lower-income communities. 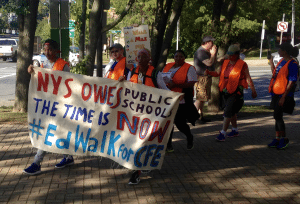 “We need the state to fund our schools the way they promised and the way they should,” said Art Plichta, a retired educator who led the demonstration for AQE in Beacon.

After the 2006 decision, state leaders vowed to provide $5.5 billion for schools in New York City and the rest of the state. But two years later, during the financial downturn, the funding disappeared. Advocates say the ensuing shortfall virtually wiped out any gains that had been made.

According to AQE, the state Assembly earlier this year passed a budget that included a multi-year plan to meet the requirements of the 2006 judgment. Gov. Andrew Cuomo countered with a plan that would provide 6 percent of the aid, without a multi-year commitment. The Senate majority proposed providing 20 percent funding, also without a long-term plan.

Of the $5.5 billion pledged, the state still owes $3.9 billion, AQE says, and the districts with more students in need are owed the most.

At the Oct. 5 rally at Polhill Park, state Assemblyman Frank Skartados, a Democrat who is running for re-election in the 104th district that includes Beacon, called the state’s inability to pay “unacceptable.” The problem, he said, is that “as a state, we have failed to live up to our constitutional responsibility” to provide all children with a basic education. Because a decade has passed since the ruling, he said, “students who are graduating right now did not have the benefit of a sound education.”

Former state Sen. Terry Gipson (a Democrat who is running to regain his seat in the 95th district, which includes Philipstown), Beacon Mayor Randy Casale, City Council member Peggy Ross and members of the Beacon school board also were present, as were about three dozen residents and children.

Once the marchers reach Albany — Beacon was day 4 of 10 — AQE says it wants Cuomo and the legislature to commit to paying the $3.9 billion debt over two years.

At the rally, Beacon school board member Meredith Heuer read a resolution of support adopted by the board. Of the 25 million students who attend public schools in New York state, Heuer said, more than half are considered poor, including 51 percent of the 2,900 students in the Beacon district.

If school funding is increased, she said students would have the chance to learn in smaller, “private school-sized classes” and with a greater range of subjects. “It’s not extravagant,” she said. “It’s fair.”