When nine veterans from Cold Spring traveled to Washington, D.C., in late September, it was a chance to reflect on their military service and to honor their brothers-in-arms. The veterans and their guests had time to relax and socialize and there were even educational moments at the National Museum of the United States Navy and the National Air and Space Museum.

But it was also an emotional journey that included stops at Arlington National Cemetery and intense memories brought on by monuments dedicated to those who served and the many who died in World War II, Korea and Vietnam.

The three-day excursion was sponsored by members of the George A. Casey Veterans of Foreign Wars (VFW) Post 275 and American Legion James Harvey Hustis Post 2362.

Ed Murphy, one of the organizers, spent 45 years in the Army, including in the infantry, airborne and Special Forces. He achieved the rank of command sergeant major, the highest attainable for enlisted personnel. His last mission was to Saudi Arabia in 1990-91. “Basically we felt it was time for the older vets to see the war monuments,” he said. “We had talked about it for a long time. It was time to do it.”

Joe Etta enlisted in the Army in 1941. By war’s end, he had survived the allied invasions in North Africa, Sicily and Normandy on D-Day. He had visited the National World War II Memorial twice before but said this trip was no less rewarding. “Before, I walked around the entire monument area,” said Etta, who is 98. “Now I’m here in a wheelchair and thankful I can come here again. I just can’t talk enough about it.” 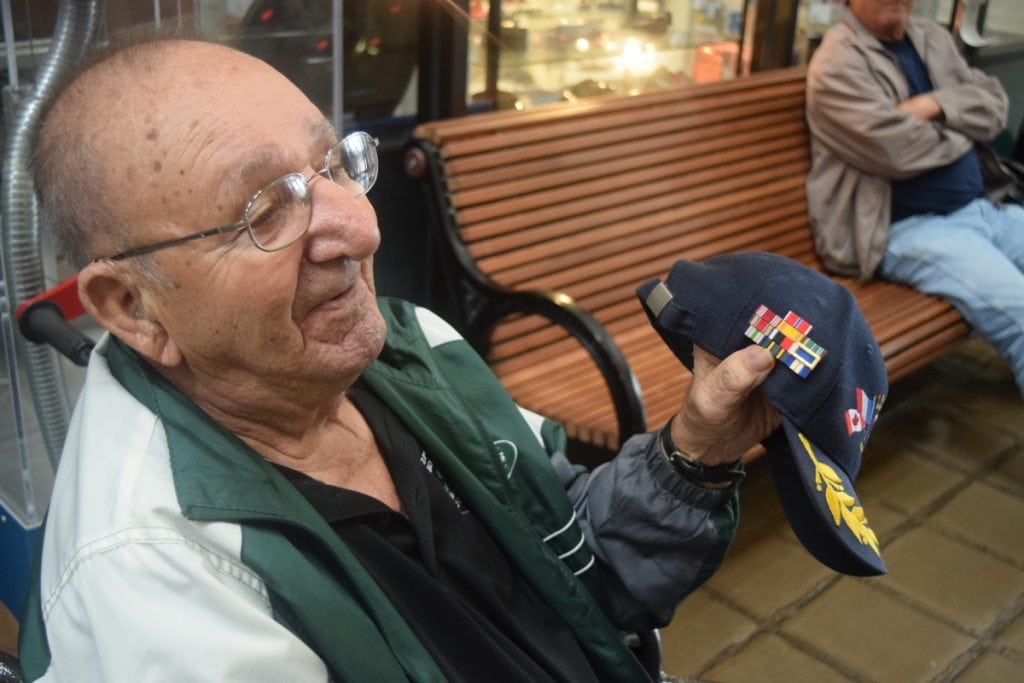 Etta’s memories of the invasions remain vivid, especially from North Africa. “A lot of my friends died there,” he said. “I jumped into water up to my neck. I didn’t know if I was going to live or die. I was terrified.” Sitting near the monument he said: “It’s wonderful to come here. I’m glad I lived long enough to see this again.”

Terry Lahey, 86, served in the Korean War in 1951-52 with the Army Combat Engineers. “I lost my lieutenant, my platoon leader,” he said during a stop at the Korean War Veterans Memorial. “That was pretty rough. He was a nice guy — a good leader,” he recalled. The memorial, with its depictions of bundled soldiers, also brought back memories of the bitter cold. On one occasion, “It was so cold we’d take turns sitting in the truck,” he said. “I remember saying the easiest way to die would be to freeze to death — you’d just go to sleep.” 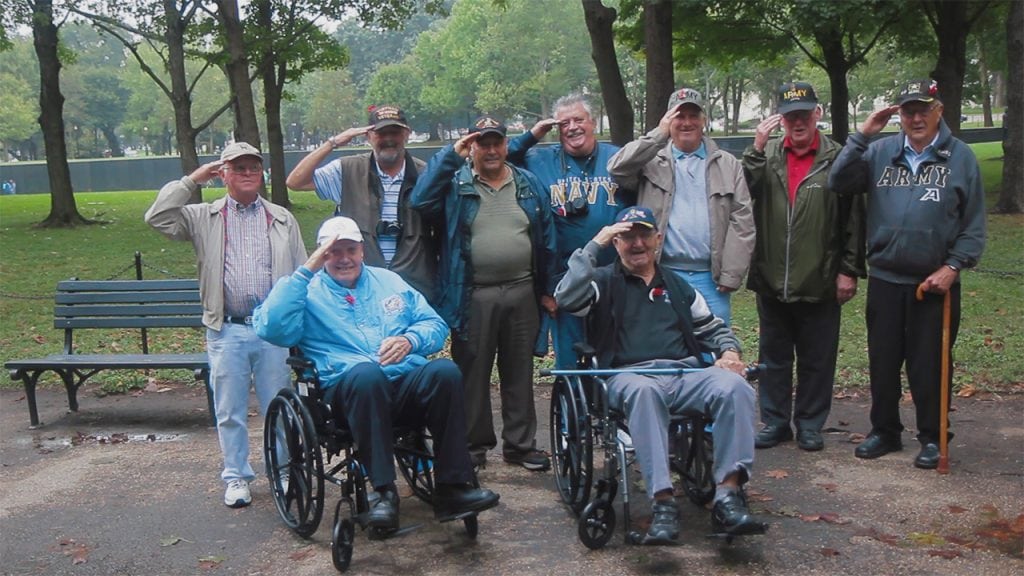 A nine-veteran Cold Spring salute. ”The Wall,” the Vietnam Veterans War Memorial is in the background. (Photo by Greg Gunder)

Lahey said the war was frustrating because even though the allies pushed the North Koreans well north of the 38th Parallel, that line become the demilitarized zone. Still, he takes pride in the fact that his unit built a bridge used for peace talks. “Now you’ve got that nut [Kim Jong-un] in North Korea, but South Korea is doing really well,” he said. “At least we helped South Korea out, that’s for sure.”

Three of the veterans served in Vietnam. Their visit to the Vietnam Veterans Memorial Wall, which is inscribed with the names of more than 58,000 Americans who died, was profoundly moving.

Steve Merando served with the Navy Seabees from 1969 to 1973, including duty in the Mekong Delta where his unit built tactical bases for swift boats. He found the name of Keith Warren F. Livermore, a Garrison resident killed in 1968 at age 19.

“I played Little League with him,” Merando said. He remembered “the whole town was saddened” upon learning of Livermore’s death. “It’s a great honor to be here,” Merando said, clearly emotional. “It’s a shame that so many people had to die. And there are still people missing.” 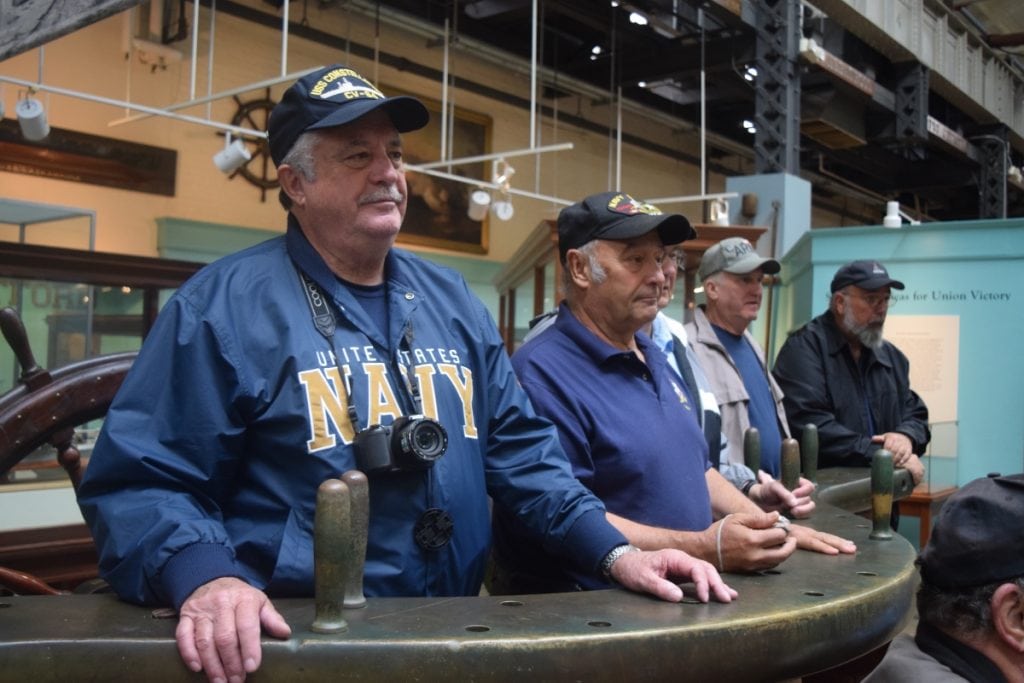 Tom Kivel served in the Navy from 1966 to 1970, including in Vietnam aboard the aircraft carrier USS Constellation, primarily in the Gulf of Tonkin. “This place is special,” Kivel said of the memorial. “It’s sad — all these guys lost. Most people consider it a lost cause. I will never consider it a lost cause.” For Kivel, visiting the wall was humbling. “I have a hard time coming back — but I always do.”

It was an especially difficult visit for Mike Mastrolia. “I have eight friends on the wall,” he explained. Mastrolia was in the Army from 1967 to 1970, including a tour in Vietnam where he served as a helicopter door gunner. “I flew every day,” he recalled. He rubbed the name of Roy B. Parsons. “He was one crazy helicopter pilot. I wasn’t with him the day he was killed — they got trapped in fog and crashed into the side of a mountain” on Feb. 20, 1968. Ten other soldiers died as well. Sobbing, Mastrolia added: “He had a real thick Oklahoma accent. I miss him.” 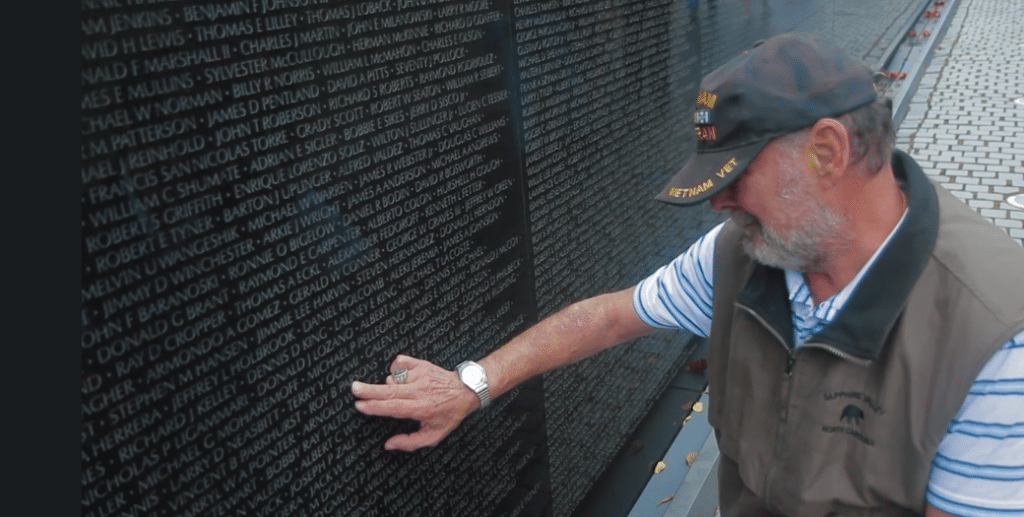 Mike Mastrolia rubs the name of Roy Parson of Perkins, Oklahoma, who died with 10 other soldiers in a helicopter crash in Vietnam in 1968. (Photo by Greg Gunder)

Mastrolia described the abrupt end to his time in Vietnam. With two weeks left in his tour, a buddy was “freaking out” about flying a mission. Mastrolia volunteered to take his place. “It was a bad decision,” he said.  “An emergency landing didn’t go well. I awoke five days later in a hospital in Germany.”

Three other veterans made the trip. Ed Englebride entered the Army in 1956 and served as a specialist 3rd class as part of a machinist battalion. He also spent more than six years in the Army Reserves. Phil Schatzle served two years as a sergeant in the Army, also beginning in 1956. Ray Jones was a specialist 4 in the Army from 1961 to 1964. All three were stationed in Germany.

Mastrolia said the trip had a distinctly different feel from his previous visits to the monuments. “Going there with a group of other veterans — that was great,” he said. “There was a lot of camaraderie.”

One thought on “A Trip to Remember”