Bill Ochs, 70, a scholar, performer, and teacher of Irish traditional music who was called a “central figure in the renaissance of the tin whistle” by National Public Radio and “the leading tin-whistle teacher in North America” by the Irish Voice, died Oct. 5 in Mt. Kisco.

Born May 14, 1946, in Newark, New Jersey, Bill was the son of Herbert and Betsy Ochs. He split his time between his New York City apartment in Hell’s Kitchen where he had lived since the 1970s, and the Hudson Valley, where he shared a home with his partner of 15 years, Margaret Vetare, first in Cold Spring and more recently in Beacon. 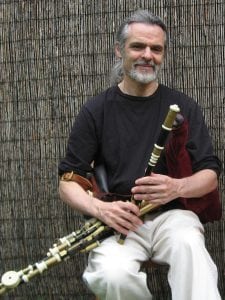 Bill studied French and theater as an undergraduate at Wesleyan University and earned his MFA in theater at Sarah Lawrence in 1971. Ultimately, though, he dedicated his life’s work to playing, teaching and understanding the history of Irish wind instruments: the tin whistle, wooden flute and uilleann pipes. Drawn irresistibly to the pipes, he sought out teachers in the U.S. and Ireland at a time when almost nobody in this country was playing the instrument. His intense commitment to the uilleann pipes was furthered by a grant from the National Endowment for the Arts to study in Ireland for six months in 1976. During this period he was also involved in the education programs of the Irish Arts Center in Manhattan, where he taught for more than 40 years from its founding in the early 1970s through 2015.

Throughout the nearly half a century of his career, Bill delved into many aspects of traditional music: performing; researching and writing; producing albums of other musicians; and creating meticulous and beautifully rendered transcriptions of tunes. He was especially inspired by the music of Micho Russell, producing two CDs and a video documentary of the County Clare whistle player. He was perhaps best known as the author of The Clarke Tin Whistle, a history and instructional tutor he published in 1988 that has sold more than 250,000 copies.

But teaching was his passion, and it was as a generous and highly skilled teacher that he made the biggest impact. Most of his students were adults and whether they were advanced piping students or beginning tin whistle students who had never picked up a musical instrument before, he brought the same commitment to their success. Above all he wanted people to be moved by the music and to experience the happiness that comes with creating something beautiful.

Besides his immersion in Irish traditional music, Bill was a political activist who in the past decade devoted tremendous energy to the campaigns of Democratic candidates for U.S. Congress in New York’s 18th (and formerly 19th) district. He was also exhilarated by the outdoors and was an avid swimmer, hiker, cross-country skier, birdwatcher and canoeist. On the trail or in the canoe, he always wanted to see what was around the next bend.

Bill is survived by Vetare and her family and a sister, Sara Ochs, of Schenectady. A memorial service is planned for the spring. Memorial donations may be made to Doctors Without Borders (doctorswithoutborders.org).