Katie Cunningham of Nelsonville, a junior setter for the Keene State College volleyball team in New Hampshire, was named Oct. 10 as the Little East Conference’s Offensive Player of the Week. 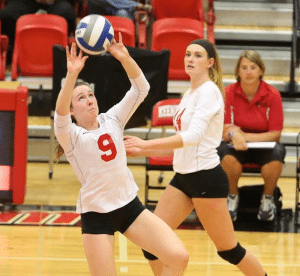 In a 3-2 victory over the Massachusetts College of Liberal Arts, Cunningham had 43 assists and 12 digs. In league wins, she had 44 assists against Western Connecticut State and 36 assists and 11 digs against Bridgewater State. She also had 11 assists in a 3-0 nonconference win Oct. 11 over Lyndon State. The Division III Owls are 14-7 overall and 4-0 in league play. Cunningham was a member of Haldane High School’s 2013 state championship team.