Activists say it would protect children, save lives

The Philipstown Town Board agreed Oct. 6 to consider a local law that would require gun owners to store their weapons with locks or in safes, after residents pleading for action filled Town Hall.

Alex Dubroff, a Philipstown resident and the Hudson Valley coordinator for New Yorkers Against Gun Violence, backed a similar measure in remarks in September to the Beacon City Council (Gun Storage Debate Comes to Beacon, Sept. 24). She organized a petition drive in Philipstown that gathered 435 signatures.

She told the Town Board that, according to a U.S. Department of Justice study, a third of handguns are kept loaded and unlocked and that two children are killed each week in accidental shootings. “This law is about protecting our loved ones… especially our kids [and] about our responsibility as members of a community,” she said.

Federal law requires manufacturers and licensed gun dealers to provide a storage or safety device with every gun sold, although the buyer does not have to use it and the law does not apply to private sales.

Eleven states have laws about locking devices, according to the Law Center to Prevent Gun Violence, but only Massachusetts requires them on all firearms. New York City also requires guns to be secured.

New York state law requires a gun owner to keep a firearm locked if he or she lives with a felon, a convicted domestic abuser or a person who cannot legally buy a gun due to his or her mental health history.

The New York State Police require that locking devices be secured by a combination or key and that they be strong enough not to be pried open with “common household tools.”

Carolyn Llewellyn said that an average of 92 gun deaths occur daily in the U.S. and that more than 200 school shootings have occurred since 2013. “There’s not a sensible gun owner who does not want this,” Llewellyn said. 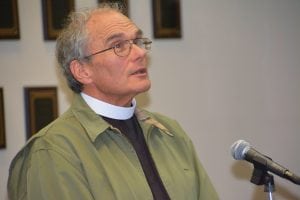 The Rev. Frank Geer  urged the Town Board to consider a gun-storage law. (Photo by L.S.  Armstrong)

The Rev. Frank Geer, pastor of St. Philip’s Episcopal Church in Garrison, observed that after a tragedy people tend to proclaim, “Never again,” but that the words ring hollow when nothing happens to prevent further gun violence. He encouraged the board “to put a little emphasis behind the phrase ‘Never again.’ ”

The proponents predicted that if the Town Board drafts a law, it will face fierce opposition. “You’re going to get push-back,” Kathleen Foley of Cold Spring warned. “I ask you to be brave.”

Llewellyn said “the reason we do not have safe-storage laws” is the National Rifle Association. “I pray you guys have the guts not to bow down to the lobbyists.”

(The NRA has long opposed safe-storage laws, countering that such “feel-good” measures are an invasion of privacy, would have low compliance and may leave those who comply defenseless, among other objections. It argues that gun-safety education is a better solution.)

Following comments by about 10 proponents of the law, Supervisor Richard Shea cut off remarks. “Obviously, people are very concerned,” he said. Board Member Nancy Montgomery said: “We’ve been talking about this for four years. I apologize that government on all levels has failed you and I’m happy to take a stand and move this forward.”

At the meeting, Stan Freilich of Garrison shared a report of incidents involving guns in Putnam County that he obtained with a Freedom of Information Law request from the Putnam County Sheriff. (Freilich also filed FOIL requests with the Cold Spring Police, which said it did not compile such data, and the New York State Police, which did not provide data.)

Alex Dubroff addresses the Philipstown Town Board at its Oct. 6 meeting (Photo by L.S. Armstrong)

The 62-page report listed 476 incidents from 2011 through early 2016, including six suicides, one attempted suicide, three deaths, two assaults, one murder, 108 firearms taken as evidence and 355 cases in which a gun was taken by police for “safe-keeping.” In one case involving an early morning domestic dispute on a road, deputies confiscated 25 weapons. In other cases they seized 10 or more — including 35 firearms taken Dec. 31 in an incident of alleged assault and menacing.

While discussing the proposed law, Town Board members recalled a 2011 incident in which a resident at a board forum disparaged the board and mentioned he was “packing,” which many took to mean he was armed. When the board drafted legislation to prohibit guns at such meetings, demonstrators gathered outside Town Hall. Threatened with lawsuits, the board shelved that effort, but in December 2012, under its employee-protection policy, it banned guns on town-owned property such as Town Hall and town parks.

11 thoughts on “Philipstown Board Asked to Enact Gun-Storage Law”