Could it be the first? The first-ever production of The 25th Annual Putnam County Spelling Bee actually taking place in Putnam County? Well, maybe — if you eliminate all those other pesky Putnam counties. There are 10 in the U.S., including ours, and odds are that the Tony award-winning musical, which was conceived by the founder of a New York City improv group and first performed on Broadway in 2005, has been mounted in one of them. But certainly it has never been presented at the Philipstown Depot Theatre, despite its setting at a generic Putnam Valley Middle School.

That will be remedied Oct. 21, when the production opens at the Depot for a three-weekend run, with adults (and one high-school student) playing the children’s roles.

Here are the contestants, parents and school administrators, all of whom have tics and quirks, each seeking to avoid the ding of the bell at an incorrect vowel choice or the inaccurate doubling of a consonant. We asked for their family’s country of origin and what part of speech they would be. 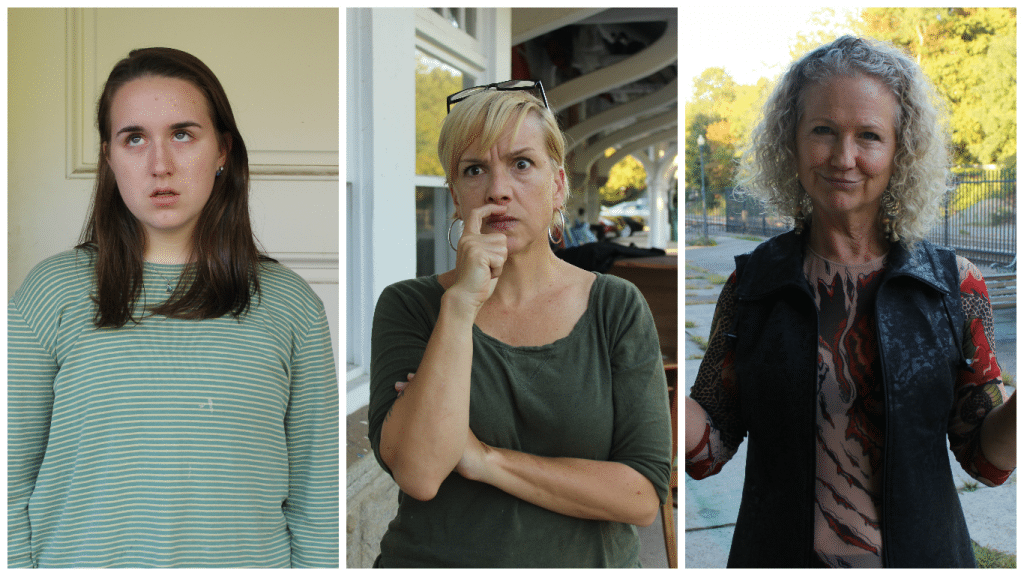 Marcy Park (Harper Levy) says she is generally “tired and bored.” It’s no wonder, as she describes her life as “I spell and I wait.” Yet, conversely, when asked what part of speech she is, Marcy does not hesitate to call herself a verb, because “I’m always doing, doing, doing.”

Carl’s Dad (Jenn Lee) says his grandmother’s country of origin is Poland, while his grandfather’s is Michigan. After first declaring himself to be a proverb, Carl’s Dad realized that was not a part of speech and revised his answer to “I am the punctuation.”

Meg Mahony (Cat Guthrie) doesn’t know her grandfather’s country of origin. “Hell, I don’t even know who my parents are,” she confided. Meg is a “comfort counselor” but doesn’t always feel the call. “I think the students are little you-know-whats who ought to grow up.” Meg’s favorite word is awecomeon. 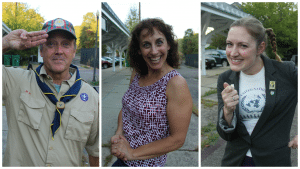 Carlito Tolentino, a/k/a Chip (Bobby Convertino) mentioned several times during the interview that he won the bee last year. Spoiler alert: this year, he has what he calls “an unfortunate incident” during the competition, which creates a “big problem” for him.

Rona Lisa Peretti (Lisa Sabin) began by instructing, “That’s a space between Rona and Lisa and one ‘r,’ two ‘t’s in Peretti.” When asked to describe her job at the bee, she waxed poetic, “Rona Lisa Peretti shines like a star as she spells the bejesus out of everything. Oops, the bejimmy.”

Logainne SchwartzandGrubenierre (Fay Gerbes), more commonly known as Schwartzy, believes she “comes from Czechs.” Asked to use her name in a sentence, Logainne did not hesitate, although she did lisp. “Leaf was acting kind of Schwartzy when he answered the question correctly.” Her favorite word is belligerent. Her least favorite word is “anything that has ‘s’ in it.” 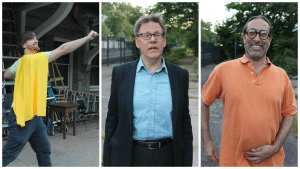 Leaf Conybear (Asher Pacht) was a little murky on his country of origin. “I wanna say North Dakota?” As for what part of sentence he is, Leaf noted, “I’m probably the end of a speech; the part where everybody claps.”

Doug Panch (John Lane), when asked what part of a sentence he would be, replied, “I am probably a footnote to life because I’m a vice principal and will always be a vice principal.” After prodding, Doug admitted to “very much admiring Rona.” Something to keep an eye on.

William Barfé / Barfée (André Herzegovich) was unsure of the spelling of his last name. “Maybe there’s two ‘e’s. I never thought about it,” he says. William cites his country of origin as “the Austro-Hungarian Empire” and calls himself a “direct object because I’m the object of ridicule.” After declaring sponge to be his least favorite word, moments later he says sponge is actually his favorite word.

Olive Ostrovksy (Maia Guest) says she would describe herself as an adjective because she loves to clarify and further explore the meaning of words. Olive, optimistic explorer of the oversized dictionary, sets out to discover love and glory at the bee. She excitedly declares that onomatopoeia is her favorite word!

Jesus (“J”) (Chris Whipple) says his country of origin is Israel and that “although people tend to think of me as a proper noun, I like to think of myself as an unassuming article.” Reflecting on his role in the proceedings, Jesus shares that “it was at the spelling bee that Jesus was once again called upon to divinely intervene in matters of misguided intentions.”

Spelling Bee is directed by Christine Bokhour with musical direction by Nathan Perry. The musicians are Gareth Guest (woodwinds) and Mike LaRocco (percussion).

Showtimes are Fridays and Saturdays at 7:30 p.m. and Sundays at 4 p.m., with the exception of Saturday, Oct. 29. The show contains some adult humor and language but there will be G-rated performances on Oct. 29 at 2 p.m. and Nov. 6 at 4 p.m. Tickets cost $25 for adults and $20 for seniors and students and can be purchased at brownpapertickets.com.

Video by A. Rooney; produced by Gregory Gunder