The historic stone wall owned by St. Mary-in-the-Highlands along Wall Street in Cold Spring is collapsing, potentially creating a financial challenge for the Episcopal church.

Mark Forlow, a church warden, said the granite wall along the north side of Wall Street from Main to Furnace Street dates to the 1860s. “It has collapsed in two places,” he said. “Insurance will cover some of the repair costs, but more funding is needed to restore the wall and make it safe for years to come.”

Father Shane Scott-Hamblen said the cost of the project is not yet known but the repairs could be extensive. In addition to two areas that have already failed, other parts of the wall appear unstable. The problem is serious enough that the village has postponed paving Wall Street, a project originally scheduled for this fall. 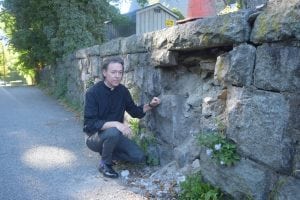 Father Shane Scott-Hamblen of St. Mary’s is shown at a spot where the wall has already collapsed. (Photo by M. Turton)

A similar situation occurred in 2013 at St. Philip’s-in-the-Highlands Episcopal Church in Garrison when a stone wall there collapsed. But that structure over the years had become a retaining wall for Route 9D, a state highway, and posed an immediate safety hazard because of heavy traffic that included buses from the Garrison School across the street. The Rev. Frank Geer said the New York state Department of Transportation covered the cost of repairs and also paid for the use of church property as a staging area during construction.

There are no similar safety issues at St. Mary’s — the failing wall is on church property adjacent to Wall Street but does not support it, leaving the responsibility for repairs to the church rather than the village. Whether the project involves minimal repairs or a restoration, fixing the wall will be no easy task. Most of its granite pieces weigh hundreds of pounds each.

The church plans to raise funds to cover the cost of work not covered by insurance. Forlow, who is the village historian of Cold Spring and the town historian for Philipstown, tried to put a silver lining on a problem that any church could do without. “For those who have a love for things of historical interest … this is a golden opportunity to preserve a Civil War-period structure,” he said, noting that tax-deductible donations can be mailed to St. Mary’s, 1 Chestnut St., Cold Spring, NY 10516.