The “big birthdays” are often a time for reflection. For Carl Van Brunt, turning 70 has meant “there is another marker which is hidden but which is reflected in the work on view.” The work on view, at the Theo Ganz Studio in Beacon, is 13 limited-edition digital paintings, all created this year. The exhibit, Blue Sky Mind, continues through Nov. 6. An artist’s talk is scheduled for 7 p.m. on Thursday, Oct. 20.

Van Brunt has been creating art digitally since 1980. An early adopter, he was inspired by his work in advertising, where he was exposed to computer-driven retouching techniques and mesmerized by the sight of an “original little Apple machine in a showroom — it only had eight [display] colors.” He says he “longed for the day when a personal computer would allow me to work on that level.” 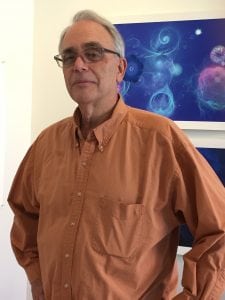 Before the technology caught up with him, Van Brunt painted with oils and acrylics. Both parents encouraged him at a young age. His father “very tuned into modern art; he turned me on to people like Pollock when I was around 12. My mother was musical and always had Bartok and Stravinsky playing. I feel that for most artists there’s a gene that’s been uncovered.”

Van Brunt studied art at Williams College (“more history than practice”) and painted using standard tools such as palette knives and brushes. He was frustrated by the familiar effects they produced. At the same time, he was listening to jazz and “admiring the ability to make something up on the spot. You could perform something that could be a sign of expression of your inner life.”

When desktop computers became a reality in the early 1980s, Van Brunt jumped at the chance to use them to make art. “Simultaneously I was learning more and more about Buddhism and meditation, which I found to be like improv in the sense that it was not attached to a particular result, and so they dovetailed,” he recalls. 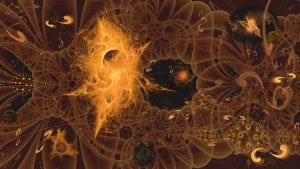 “Eye In The Sky” by Carl Van Brunt

It took time for this to meld, and it wasn’t until the late 1990s that Van Brunt believed he was “getting to the point where I was genuinely expressing myself rather than being derivative.” This coincided with a 2000 relocation from New York City to the Hudson Highlands in pursuit of a place “where the rhythm was not so jolty,” he says. Soon after he and his family moved to Cold Spring, he opened the Van Brunt Gallery, which was then one of the first in Beacon, on the east end of Main. (After moving further west on Main, it closed in 2011.)

Van Brunt, along with his wife, Suzanne Ball, then began Van Brunt Projects, which promotes regional artists at fairs and exhibitions. He is also gallery director of the Woodstock Artists Association and Museum.

Van Brunt created the digital paintings in Blue Sky Mind with what he describes as a “fractal generator” called Chaotica, a program that links “geometric numbers to a spectrum of colors,” he explains. “You put in values and the spectrum is linked to those values.” He admits knowing nothing about the math involved, but “someone created this and I learned how to play with it. I’ll choose a possibility and then work within the parameters to change it.” 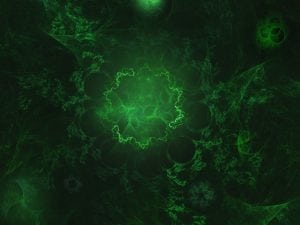 Pointing to a leaf-like cluster motif repeated throughout one painting, Older Than Time, Van Brunt noted: “This is one fractal. I think of it as like a walk in the woods with a camera. You take photos then go through the images and one strikes you and that becomes the beginning. You then play with color for the background, generate or discover other fractal images that go with that background and overlap them. It’s a process of composing and layering — sometimes 20 or 30 layers — eliminating and adding. Finally you reach a balance, expressive of a truth unable to be described in words or other forms.” The results from this process, he says, are “indeterminate, like music.… I feel like I’m discovering things rather than making things; I’m finding things that are there.”

Theo Ganz Studio, at 149 Main St., is open from noon to 5 p.m. on Saturdays and Sundays, and by appointment. For more information visit theoganzstudio.com.

Images courtesy of the artist