As Pamela Doan reported in the Sept. 9 issue (Where’s the Fruit?), it’s been a tough year for local tree fruit. The apple crop suffered severely from both an early bloom followed by a killing frost, and the summer drought didn’t help at all.

Popular early varieties were a no-show and the fruit we’re seeing on the farms and in the markets is noticeably smaller than usual. And while this may make moms with small children happy, it’s a bit of a letdown.

There is, however, an upside to the drought: the apples that make it, though smaller, tend to be crunchier and sweeter than usual. Less water in the fruit means that the sugars are more concentrated, a bonus that is sure to make cider fans happy.

But while yield may still be a problem and pick-your-own an iffy proposition, New York is after all the Empire State, and we should celebrate this Empire-free season regardless. And while an unceremonious chomp on a perfectly ripe available specimen is the way to go, this upended harvest suggests a bottoms-up solution. 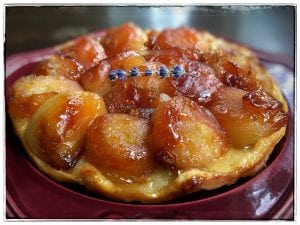 Tarte Tatin is, despite its exotic name, nothing but a homely upside-down tart of apples caramelized in butter and sugar, baked with a crust on top and — when done — inverted onto a serving plate. The genesis legend of this sublime dessert is tangled in typically Gallic culinary myth-making. Although obviously not as American as apple pie, your basic tarte Tatin will certainly give mother’s finest a run for its money in ease of preparation and pure gustatory enjoyment.

Traditionally sugar and butter are layered on the bottom of a dedicated tarte Tatin pan with apples arranged artfully on top and cooked on the stovetop low and slow (as all the best things are). The process bears little watching or danger. When the apples are done, a single sheet of (usually puff) pastry crowns the works and is baked until golden, barely cooled and flipped for serving.

Keeping the accent Français, a dollop of crème fraîche finishes it. (Vanilla ice cream might be overkill, but sometimes it’s never done ’til it’s overdone.)

This Yankee version suggests a well-seasoned cast iron skillet instead of the dedicated pan, which removes the worry of stovetop or oven spillover.  I have seen recommendations to dry the apples out a bit before cooking, accomplished by keeping the peeled and halved apples in the refrigerator for a day or two, but that seems unnecessary given this year’s crop of recommended Galas, Jonamacs, Jonagolds and my preferred Honeycrisps.

I’ve opted for Patricia Wells’ simple pate brisée versus a puff pastry but you can simplify this recipe further by using a sheet of prepared frozen puff pastry, available at most supermarkets. Follow package directions for use.

The lavender is a subtle but unnecessary variation suggested by food-pairing science. The effect is subtle and another option might be a few star anise pods but you can’t perfect perfection.

For the pastry: Up to a day ahead, combine flour and salt in a food processor; mix for 10 seconds. Add cubed butter and pulse for 10 seconds until mixture forms a small crumb. Add water and mix just until dough forms a ball. On a clean surface, smear the dough away from you, folding it back on itself and repeating until smooth. Form into a flat disc, cover in plastic wrap and refrigerate for at least an hour, up to 24.

For the apples: Melt butter in a small pan over medium low heat until just melted. No sizzling, please! Remove from heat and whisk in the lavender. Cover and let steep off heat for 30 minutes. (Now is a good time to peel and prepare the apples if you haven’t done so already.) After steeping the butter, warm it briefly and strain into a heatproof container through a fine mesh strainer, pressing down to extract as much as possible.

Pour lavender butter into a 10-inch cast iron skillet and sprinkle sugar evenly over it, drizzling vanilla over all. Beginning at the outside, lay the halved apples in a tight circle, rounded side down, concentrically around the skillet. Repeat for another inner circle and fill in any remaining space as necessary.

Put skillet on low heat and cook uncovered; as the butter and sugar combine, maintain gentle bubble. Keep the apples in an attractive pattern as they cook down and baste occasionally with the syrup. The idea is for the syrup to caramelize and the apples to soften but not break apart. Cook for at least 1 to 1½ hour in order to achieve a golden caramel coloring.

While apples cook, remove dough from the refrigerator and roll it out to an 11- to 12-inch circle. Place it on a piece of waxed paper; using the rim of a bowl or plate a bit larger than the skillet as a guide, cut a clean circle from the dough with a small knife. Let dough rest again in the refrigerator as the apples finish cooking. Heat the oven to 425 degrees.

When the apples are cooked, remove the skillet from the heat. Sluice off excess liquid without disturbing the apples (a turkey baster is great for this chore) and gently place the pastry on top, tucking the edges down around the inside edge of the pan. Place skillet in the preheated oven and bake 25 to 30 minutes, until pastry is golden brown.

Remove from the oven and allow to cool 5 to 10 minutes. Place an inverted, rimmed serving platter over the skillet and quickly but carefully invert it so that the pastry is on the bottom of the platter with the caramelized apples on top. (If any stick to the pan, don’t fret; gently remove them and put them back in place.) Serve while still warm or at room temperature with a generous spoonful of crème fraîche or vanilla ice cream.