An Oct. 12 public hearing on Scenic Hudson’s proposal to enlarge Long Dock Park showed ample support for its expansion, but the environmental group is still facing questions about food trucks, commercialization along Beacon’s waterfront and swimming in the Hudson River.

Scenic Hudson representatives have appeared before the Beacon Planning Board several times this year to discuss their plans, which include building a boardwalk, riverside path and adding pavilion seating in the restored brownfield site adjacent to the park. The nonprofit has said it hopes adding picnic tables, a secluded amphitheater and food trucks will remake Long Dock into a casual outdoors destination.

The group’s plans for the 15-acre park have changed significantly in the past decade. Its original proposal for the site, which opened in 2011, included construction of an environmentally friendly hotel and conference center, but those plans were abandoned after the economic downturn of 2008 and severe flooding caused by Hurricane Sandy. Scenic Hudson park planner Meg Rasmussen told the Planning Board that building even a moderately sized restaurant on the flood-prone site would cost upward of $4.5 million.

In the meantime, Long Dock has become popular for its kayak pavilion, walking and running paths, outdoor yoga and annual “Pumpkins in the Park” festival. The on-site Scenic Hudson River Center (“the red barn”) is also slated to become the home of the American Center for Folk Music.

But the idea of bringing food trucks to the waterfront was a sticking point for some public officials, retailers and residents.

“I’m not in favor of anything that takes away from the health and vitality of Main Street. Food trucks can bring trash and detract tourists from going on to Main Street to eat,” said Antony Tseng, a Beacon school board member who is also on the board of the River Pool at Beacon.

Detail from a site plan for changes proposed by Scenic Hudson at Long Dock Park. No. 13 indicates the proposed location for food trucks, and No. 9 would be a new boardwalk.

“If Scenic Hudson can have food trucks [at the waterfront], are the next food trucks going to be at the base of Mount Beacon?” asked John Gilvey, the owner of Hudson Beach Glass on Main Street.

Joan Unterweger of Beacon told the board she feels “our whole world is being sold for commercial purposes. I would hate to see Beacon become another commercial tourist area.”

But Jessica Reisman, who owns the Homespun Foods café on Main Street, said she doesn’t believe food trucks at Long Dock would hurt businesses on Main.

“Main Street is thriving,” she said. “I don’t think any restaurant can complain any more. A few food trucks down by the riverfront would be a great idea.”

Scenic Hudson also faced criticism for what its expansion plans don’t include — namely, swimming in the Hudson. The group had been in discussions for several years with the Beacon River Pool about opening a larger site at Long Dock but dropped the idea, citing liability risks.

“At this point we’re kind of stuck,” said Nancy Yambem, who is on the River Pool board with Tseng. “We don’t want to leave Beacon. We want to continue … and that would mean collaborating with Scenic Hudson.” 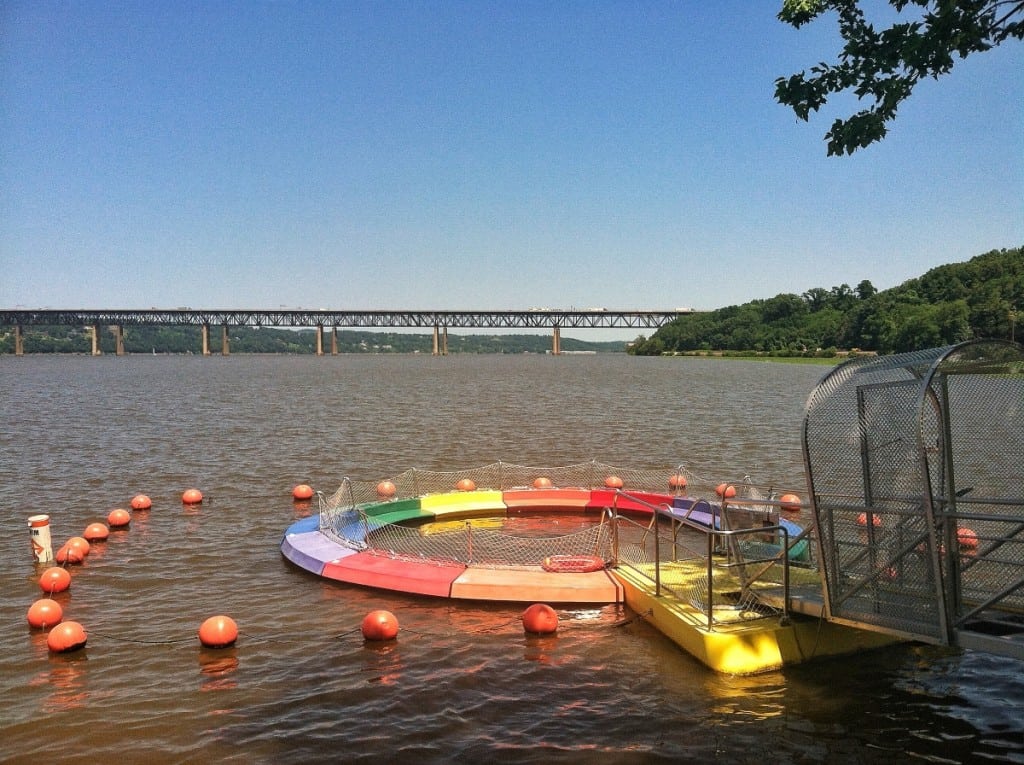 The Beacon River Pool (file photo by B. Cronin)

The River Pool opened at Pete and Toshi Seeger Riverside Park in 2007. Pool organizers say the 17-foot-diameter fiberglass pool is nearing the end of its design life, which is why they approached Scenic Hudson about moving to Long Dock.

Rasmussen of Scenic Hudson said the organization lacks the capacity to safely manage a swimming pool. And as the owner of the property, “responsibility rests with us, no matter what,” she said.

But Planning Board member J. Randall Williams noted people will almost surely swim in the river at Long Dock, with or without a pool. “You’ve got an opportunity to work with an established nonprofit with a great track record,” he said. “Your liability is going to be greater” by not working with River Pool.

Planning board members also made a number of technical recommendations regarding parking and other elements of the site plan. The public hearing will continue at the board’s Nov. 8 meeting.