No fundraising appeal this year but expenses loom

The Cold Spring Fire Company is giving village residents a year off from the all-volunteer fire department’s annual community fundraising drive thanks to the generosity of a former local resident.

Steve Etta, financial secretary with CSFC, said the fire company has received a bequest as part of the estate of a former Cold Spring resident. The fire company declined to identify the individual or the amount of the bequest, but Etta said it was in the range of annual fundraising drive that typically raises $20,000 to $24,000.

The annual appeal is CSFC’s largest fundraising effort and goes to residents served by the fire company in Cold Spring, Nelsonville and a small portion of Philipstown. The money raised is used to cover the gap between funds provided by the three municipalities and the cost of running the fire company. When possible, part of the funds are set aside to help with equipment purchases.

Etta said that for this year, at least, the gift will “take a little bit of the burden off taxpayers,” he said, adding that the unnamed estate also made contributions to other local organizations. 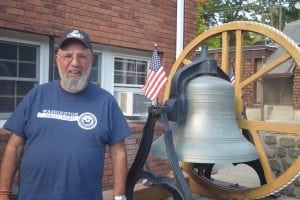 Etta, who has been a member of CSFC for 46 years, said the fire company’s annual appeal has been a fixture since the 1970s but took off in the 1980s. “We had a couple of big fires then and people saw how we do things,” he said. Etta said in its best year, the campaign raised $30,000.

Although the appeal won’t take place this year, it’s not because the  CSFC couldn’t use the money, Etta said, citing the increasingly high cost of replacing aging equipment. “The tanker-pumper we bought in 2009 cost $480,000 equipped,” he said. “We’ll probably have to buy another truck in about 10 years.” CSFC replaces vehicles every 20 to 25 years, he said.

Then there is the firehouse itself. At a recent meeting of the village board, Mayor Dave Merandy referenced a 2012 engineering report that noted the building’s roof supports, including footings, exterior walls and pilasters, were all in poor shape, and that there were “many cracks and other indications of large settlement.”

The study said expanding the building would be difficult. “It is not  capable or suitable for supporting a second floor and roof. The best options for adding significant additional floor space … would be to add a secondary story supported by an internal steel frame and build/rebuild exterior walls, or demolish the existing building, and rebuild as a two story structure.”

In 2015 CSFC presented plans to build a new 14,000 square foot firehouse, estimated to cost $4.6 million with demolition of the existing structure and engineering adding roughly $800,000.

One thought on “Cold Spring Fire Company Gets a Surprise Gift”