The Philipstown Boys U16 Chargers made the road trip north to Kingston on Oct. 16 and fell to the home team 2-0. The Chargers controlled possession from the beginning, led by the defense of Quinn Petkus, Ben Strol, Rex Young and Collin Eng-Wong. The opposition’s goals were scored on a questionable handball call and a deflected shot own-goal from a seemingly off-sides Kingston player. The game was marred by a few aggressive plays by the opposition, leading to two Chargers injuries, but Philipstown never gave up. Several shots were taken by Hayden Mayer, Kyle Mayo, Hudson Lovell and Luke Hammond, which bounced along the goal line and nearly went in. Elias Henderson had another strong game at stopper to keep any Kingston attacks from coming up the middle. The Chargers look to rebound as they take on Washingtonville Oct. 23 at Haldane.

The Philipstown Boys U14 Warriors headed across the river to take on the Goshen Royals for a game that ended with a tough loss for the team. The half opened with Luca Van Dommele, Charlie Keegan, Paolo Coumans and Owen Edelson forming the defensive line with Graeme McGrath in goal. At the whistle, the Royals took the lead and scored three times and the Warriors were unable to move the ball up to their end of the field. Middle, Daniel Carlos stopped the ball and managed to bring it up the field to Gus Grossman but the opportunity to shoot eluded the team.

Goalie McGrath was able to save subsequent shots at the goal and booted the ball to the strikers John Weatherup, Grossman and Zachary Cannova. Christian Moreno subbed in and managed to get more traction on the ball while Coumans held his own on defense, interfering with the Royals attempts to score. The opponents found the net again but Moreno turned it around and scored the first goal for the Warriors.

The half continued with Grossman steadily moving toward goal with backup from middies Gael Frezza and August Lee but the Royals continued to rack up the goals. Moreno landed the ball in the net on a penalty kick, bringing the score to 6-2 Royals by the end of the half. Jack Gordineer made several great saves as goalie in the second half but it was more of the same as the Royals goals climbed steadily higher, ending at a 9-2 loss for the Warriors. The Warriors will play a late afternoon game Oct. 23 at home against the New Paltz Arsenal.

The Philipstown Boys U13 Arsenal team was back in top form as they hosted the Orange County Eagles at the Haldane turf. Philipstown had the opening kickoff and took advantage of their first possession with a series of quick passes finished by a dish from middie Roy Smith to Colin August. August took an excellent shot that found its way into the back of the Orange County net, putting Arsenal up by one goal only 25 seconds into the match. The Gunners capitalized on the early momentum and put on a display of unselfish passing and creative ball movement.

This culminated later in the half when stellar Philipstown goalkeeper, Danny Urbanak made a great save and quickly distributed the ball to the left sideline to Stephen Robinson. Robinson passed to teammate Tomas Struck who passed to Evan Maasik. Maasik switched fields to Ryan Eng-Wong who sent a through-ball to Colin August on the right wing. August received the ball and blasted a shot that was deflected by the Eagles’ goalie. Maasik had positioned himself on the far left post where he executed a stunning bicycle kick for Philipstown’s second goal of the game, bringing the score at the half to 2-0 for Arsenal.

In the second half, Philipstown’s attackers Stefano Hammond, Smith, Eng-Wong, Robinson, Maasik and August continued to knock on the door of the Orange County goal. A direct kick taken by Patrick DiNardo in the Eagles’ backfield was finished with a one-touch redirection by Maasik for his second goal of the game. Thirty seconds later, Rowen Kuzminski dribbled past two defenders and crossed the ball to the left side where Maasik received the ball and scored his third for a hat trick on the day.

Defense was the name of the game as first half keeper Urbanak and second half keepers Chase Mayer and Tomas Struck combined with center backs DiNardo and David Tacuri, wing backs Kuzminski, Robinson and Aidan Sullivan-Hoch and holding middie, Matthew Nachamkin, were dominant in the Philipstown back and midfield. The speedy Orange County offense was unable to put a goal on the scoreboard as the Arsenal workhorses denied all attempts on goal bringing the score at the final whistle to Philipstown 4, Orange County 0. The top-notch Arsenal defense has allowed only three goals in five games, including three shutouts, and their incredible efforts continue to be a major factor in the team’s success.

Strikers Remain Undefeated
In their most exciting match of the season so far, the Philipstown Boys U11 Strikers held off the talented Cortland Spirit for a 3-2 win, maintaining their undefeated record. Despite playing on Cortlandt’s home turf, the Strikers came out aggressive from the get-go, but they soon learned that the Spirit had plenty of tricks up their sleeves. The Spirit surprised the Strikers by scoring early, but Philipstown recovered quickly as Jeremy Hall rocketed the ball over the Cortlandt goalie’s head into the net. The two teams were evenly matched on footwork and passing maneuvers, and the 1-1 score reflected this at halftime. 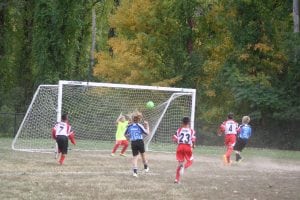 Jeremy Hall one times a shot past the goalie for a game-tying score for the U11 Strikers. (Photo by Cindy Delabie)

Early in second half, Jake Powers’ speed paid off with an easy shot into the goal, bringing the game to 2-1, Strikers. Max Westphal then scored a goal off a beautiful corner kick from Trajan McCarthy, giving the Strikers a comfortable 3-1 lead over the Spirit. The lead, however, was shortened to just one goal, as the Spirit fought hard on offense. The remainder of the game saw great passing and communication from both teams, while Strikers’ goalie Ronan Kiter made several beautiful saves. Philipstown defenders Vlad Saban, Luca DiLello and Hall remained a united front and at the final whistle, the Strikers happily came away with the hard-fought “W,” final score Philipstown 3, Cortandt 2.

Philipstown Force Win in Convincing Fashion
At the halfway point of their inaugural season, the Philipstown Boys U9 Force are on a roll, beating the Eastern Pike Strikers by a score of 7-1. Roth Westphal led the team scoring three goals, the second hat trick of the year for the impressive young player. The scoring began when Bryce O’Halloran blasted a shot from midfield that soared over the goalie’s head and into the net. The second goal came off the foot of Lincoln McCarthy who fielded a corner kick and launched it into the net from 15 feet out.

Magnus DuBois helped keep the defense strong as the Force kept Eastern Pike out of the goal for the entire first half. After the Force took a four goal lead, Coaches Pack McCarthy and Westphal pulled goalie George Stubbs and put him in the field. After only a few minutes on the field Stubbs dribbled the ball up the right sideline, cut to the middle and launched a shot past the Eastern Pike goalie for a goal of his own! The scoring was completed by Owen Powers to make it a 7-1 win for the Force. Another great win for this young team as they continue to show amazing unity for such a new group.

Small-town soccer can mean playing short-handed when injuries and illnesses overtake a team, and the Philipstown Girls U13 Raptors fielded only 10 players for the second straight game, this time against Washingtonville. Without subs and playing a man down from the start, the decimated Raptors pushed Washingtonville to the brink, scoring two goals in the game’s final eight minutes, only to fall short 4-3.

Playing a person down meant playing catch up most of the day, and the Raptors battled back from 1-0 and 4-1 deficits, showing they were game for the challenge. Washingtonville’s two strongest players had two goals apiece, including two from 25+ yards out. Playing her first game for the Raptors, Marissa Scanga began and ended the game in goal, and showed fabulous promise. Mazzie Maxwell, Sophia Scanga, Maya Osborn, and Zoe Harris played inspired defense, each hustling to create chances for the midfield. Ella Ashburn and Brynn Martin, each with an assist, shored up the midfield, and Katie Shields continued to show remarkable contributions up front in just her second season with the Raptors.

Raptor strikers Bianca Harmancin and Emilia Osborn found the goal on three separate counterattacks, two by Harmancin and one by Osborn. Their pair of goals in the final eight minutes symbolized the pride the whole short-handed and exhausted team felt battling back from the 4-1 deficit in the game’s close. The Raptors will look to rebound from this loss in Oct. 23 game at Shrub Oak.

The Philipstown Girls U9 Hawks met the Carmel Blue Lightning to gain their first win of the season. The Hawks dominated throughout the game, exhibiting excellent passing and control in the midfield. Early in the game, Olivia Moran scored a speedy breakaway goal for the Hawks, her first of the season, giving the Hawks a 1-0 lead. Marisa Peters followed with a forceful kick from just outside the goal box to increase the Philipstown lead. Peters booted another two balls into the goal for the hat trick, all while commanding the midfield with Taya Robinson.

Strong defensive plays by Jessica Tudor, clearing the ball safely away from her defensive goal, proved to be what the Hawks needed to keep the Blue Lightning at bay. Genevieve Knox and Fiona Mooney played aggressively at fullback, defending their goal with tenacity. While goalie Ava Shasta jumped on the Blue Lightning’s shots, blocking even the strongest kicks, allowing only two goals and constantly impressing the fans with her saves. Late in the second half, Anna-Cat Nelson added another two goals to the Hawks’ lead.

With superior passes and plays from Robinson at midfield, along with strong support from Gillie Soloviev and Kate Perella, the Hawks walked away with a 6-2 win. They are hoping to keep the momentum going for their game Oct. 23 against the East Fishkill Eagles.