This year, Thriller dance mob is no secret

“Did you ever want to dress up as a zombie and dance to Michael Jackson’s Thriller?” asks the website of Thrill the World.

For many residents of Philipstown, the answer is yes. For the second year in a row, a whole lot of them will be making moves Oct. 29 at the riverfront bandstand at the conclusion of Cold Spring’s Halloween parade. Last year the “flash mob” dance was hush-hush, as the organizers operated in stealth mode. It worked. As Jackson’s 1983 hit began to play over the loudspeakers, about 30 people dressed as zombies stepped forward to replicate in unison the intricate choreography of the singer’s music video. They repeated the performance on Parrott Street on Halloween.

The dance and others like it around the world are inspired by Thrill the World, which began in 2006 as an attempt to break the Guinness World Record for the “Largest Thriller Dance.” (The first event involved 62 people; last year there were 234 in Redmond, Washington.) Today it still does that but also encourages the activity as “a celebration of dance and community” that can be used to raise money for charity.

Over the past month or two, thousands of people worldwide have been getting together to learn and rehearse the Thriller dance. They’ll perform it together on the appointed day (Oct. 29), at the same time (6 p.m. in their local time). In Cold Spring it happens to fall at the time that the annual Halloween parade concludes.

Thriller came to the Highlands as a seed sown by Portland, Oregon, transplant Erin Muir, who had participated there for three years. She mentioned the event to friends Branis Buslovich and Luz Mejia Bailey and they ran with it, along with Craig Roffman. Muir had a hand in teaching the dance and found the experience “awesome, because this place has such a strong community.” On the afternoon of the 2015 parade, participants banded together, getting in costume and helping each other with the final touches of “blood, dirt and the makeup to do our scary dead faces,” Buslovich recalls. 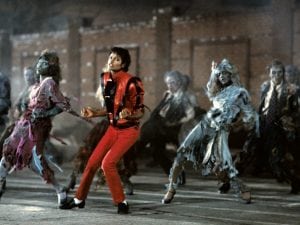 Buslovich says the covert operation involved “privately approaching people we thought would enjoy it.” She estimates it takes four or five lessons to learn the choreography. (The dance moves provided by Thrill the World are slightly reordered from the video.) It was all worth it, Buslovich says. “We surprised everybody; we pulled it off.” 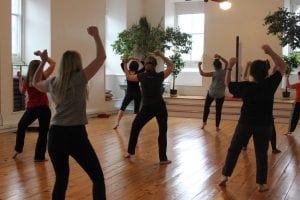 Thriller dancers rehearse on a Sunday morning at Skybaby. (Photo by A. Rooney)

It’s harder to keep a secret the second time around, and so this year it’s out in the open, with the news spread by social media and word-of-mouth. Skybaby Yoga Studio, the Fred Astaire Dance Studio and On the Fly Cycling are donating studio space for rehearsals.

Buslovich says she and Bailey — who was teaching a session recently one Sunday morning — found the idea “inspiring and uplifting; hopefully it will continue as a tradition.” Bailey recalled learning the dance in high school — it all came back to her quickly. “I was the bumblebee in front [last year], pulling the sequences,” she recalled cheerily. 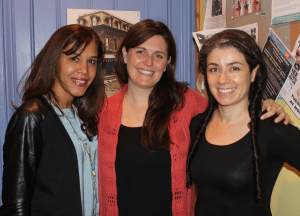 At a recent rehearsal, Haldane fourth-grader Ranger McElhattan said that while he danced last year, this year he’s putting even more effort into his moves. “I’m going to experiment with different faces, with my eye pulled really out,” he said, demonstrating that special skill. Ranger’s mom, Tania Dirks, said the dance reminds her of “the crazy antics in Gilmore Girls, which takes place in a small town like this one, and it’s a great way to create our own wacky tradition.”

Although Halloween is fast approaching, the organizers say it’s not too late to learn the choreography. Search for the “Cold Spring Thriller” group at Facebook for details. The remaining rehearsals are at 3 p.m. on Oct. 22 at Fred Astaire; 8:30 p.m. on Oct. 25 at Skybaby and 10:30 a.m. on Oct. 28 at On the Fly.

One thought on “Zombies to Invade Halloween Parade (Again)”