During her annual presentation of the county budget, Putnam County Executive MaryEllen Odell not only discussed finances — she proposed spending $153 million in 2017 — but took time to “set the record straight” on the planned senior citizens’ center in Cold Spring and other controversies.

Hours after her Oct. 6 presentation, the county legislature began reviewing the administration’s proposed budget. It scheduled a public hearing for Wednesday, Oct. 26, with final deliberations and a vote Oct. 27.

Because of New York State’s cap on property tax increases, which in 2017 will be about 1 percent, the county has limited options to increase spending. As a result, the draft budget is $1.7 million higher than last year, an increase of 1.1 percent.

Before turning to finances, Odell displayed several slides to “correct misinformation,” although she did not say where the information had originated. This included the charge that “county spending is out of control.” In fact, she said, Putnam County claims only 9.1 percent of a homeowner’s tax bill, “the lowest county portion of any tax bill in New York,” where the average is 21.52 percent. 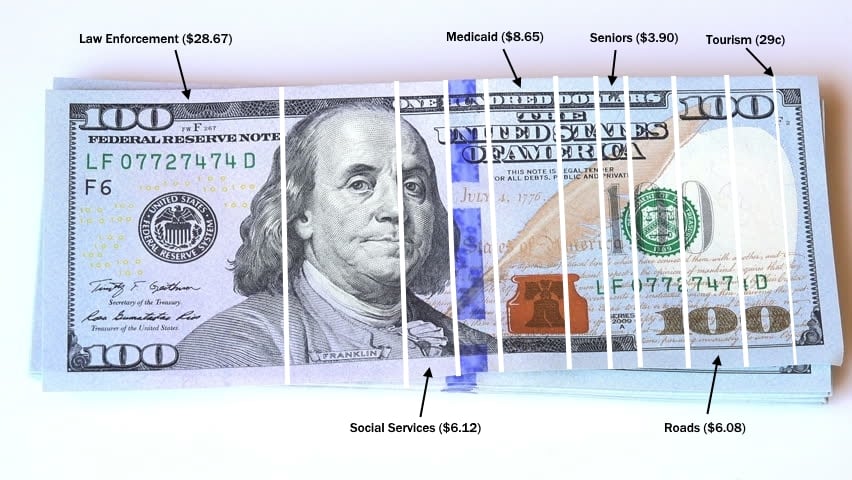 A sampling of how the county spends every $100 it collects in property taxes.

Of the remainder, Odell said 71.2 percent of taxes collected from Putnam County residents went to schools, 18.5 to towns, 0.5 percent to villages and 0.7 percent to fire districts. (The data, which Odell also shared last year, come from a report compiled by the New York State Association of Counties.)

Odell likewise targeted what she considers misrepresentations surrounding the planned senior citizens’ center at the former Butterfield Hospital site in Cold Spring. “Was Butterfield a backroom deal?” she asked, as a slide was projected showing a photo of old-time card sharks. “I don’t think so.”

She referred to criticism of county payment of some Butterfield property taxes. “The county was never paying 50 percent of the property tax for the entire Butterfield campus,” which covers 7.1 acres. Rather, she said, the payment involves “only the space we are occupying, which is 52 percent of the property tax on the Lahey Pavilion,” the site of the planned center. (Imprecise wording in a draft of the lease agreement from May was corrected in a revised version Odell signed in September.)

Moreover, Odell argued that “the county is not overpaying for the space. In fact, we are paying half of what the fair market value is.” Under the lease, the annual rent will be $77,700, or $12.95 per square foot, suggesting a fair-market value of $26 per square foot. When the Village of Cold Spring and Town of Philipstown in 2011 signed letters of intent to lease space in what was then envisioned as a multigovernment facility including the senior center, the rent was estimated at $12.75 per square foot. 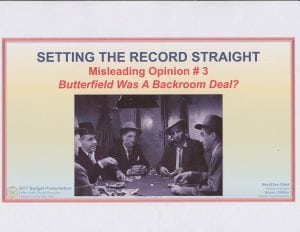 Odell said Philipstown needs a senior center because it has “the highest percentage of seniors of its overall population, 23 percent,” and that population is “predicted to nearly double over the next 10 years.” Earlier, she recalled, the county spent $11 million building three senior centers in other parts of Putnam. “We recognized that our seniors in the western part of the county were underserved and the administration and the legislature addressed it,” she said.

The cost of mandates

As in prior budget presentations, Odell blasted the state and federal governments for mandating programs and then not paying for them, leaving the county to juggle costs while also being restricted by the state tax cap. “Try to balance a budget when you’re $106.6 million in debt before you even start!” she said. “Mandated costs consume 70 percent of the total budget.”

Again as in the past, she focused on Medicaid, the federal health program for low-income people. It remains “the single largest line item in the Putnam County budget,” she said. “This year we saw the number of Putnam residents who are Medicaid recipients almost double from 6,000 to 11,000.” She attributed the increase to the Affordable Care Act, which expanded the program. 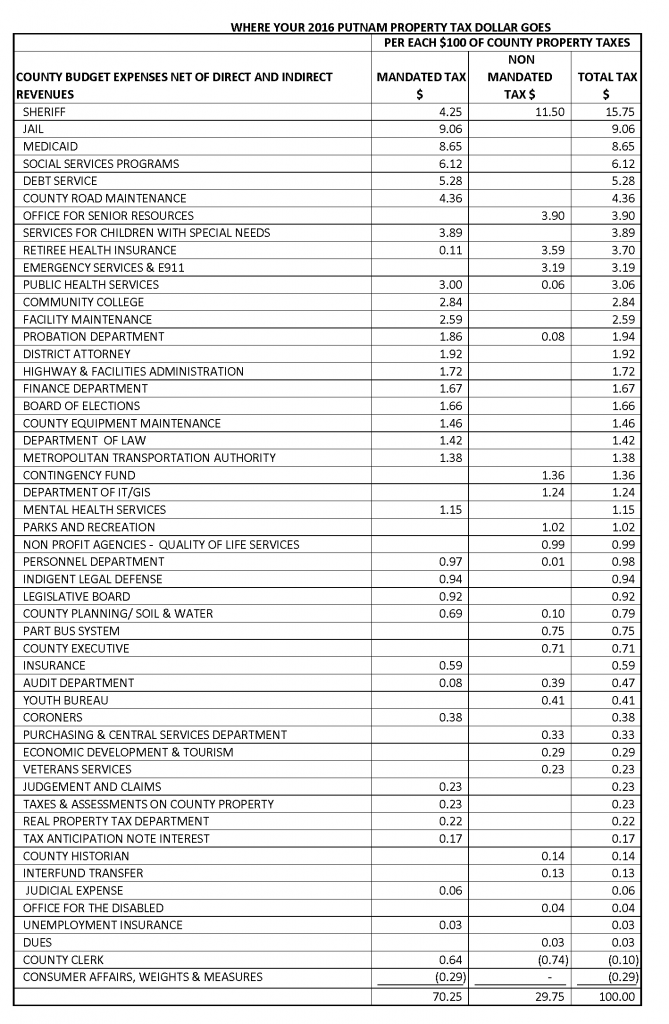 A breakdown prepared by the county showing how every $100 it collects is distributed. (Click to enlarge)

The county must spend $9.54 million on Medicaid in 2017, or about 6 percent of its budget. Other examples of “more than 200” mandated costs Odell identified include $18 million for the sheriff’s department and county jail, including probation services; $12 million for highway and facilities; $19 million for social services; $8.8 million for preschool education and early intervention; $6.3 million for loan interest; $10.6 million for health and mental health services and $1.6 million for the board of elections.

What Odell termed “quality-of-life services” total $46.5 million, or 30 percent of the budget, including $7.3 million for sheriff’s patrols, $6.2 million for the Office for Senior Resources, $4.5 million for emergency services, $3.7 million for parks and recreation and $1.5 million in aid to outside agencies.

Putnam has several revenue streams. The largest, Odell explained, is sales tax revenue, which represents 37 percent of the revenue for 2017. Without it, she said, property taxes would need to be higher.

The draft budget projects the county will collect $57.4 million in sales tax in 2017. She said the county has taken in $2.6 million more than it anticipated in sales tax revenue so far in 2016 and “we included that in the 2017 budget” projections.

In an Oct. 7 meeting of the Audit Committee, questions arose about consigning $72,287 for Butterfield senior center personnel to a contingency fund. Odell administration officials said they foresee some personnel costs but want to leave the situation fluid until the center opens and the volume of services offered and staffing needs can be assessed.

At an Oct. 14 meeting of the Physical Services Committee, legislators mentioned the reduction of the Butterfield center’s price tag to about $1.3 million from $1.5 million. When Legislator Dini LoBue asked for more information about the decrease. Legislator Carl Albano responded that a more expensive kitchen had once been expected, with “all the bells and whistles that were going to come when we had a grant” – an apparent reference to a $500,000 donation pledged but withdrawn by Roger and Elizabeth Ailes.

When LoBue pressed for information on the scaled-back kitchen, Albano said more drawings were expected.

Albano explained that the total 2017 rent will depend on when the county takes occupancy, which will likely be at least a few months into the year.

LoBue then asked why the lease had not yet been executed. Barbara Scuccimarra, who represents Philipstown, said the county was waiting for the developer, Paul Guillaro, to respond.

“We did our part,” Albano said.

One thought on “Odell Proposes $153 Million Budget for Putnam”