During his frequent bike rides from Perkins Drive to the Bear Mountain Inn, Bevis Longstreth’s curiosity was piqued by a series of stones along the path, each carved with “WPA,” for the Works Progress Administration, a federal program that put masses of the unemployed to work in the 1930s during the Great Depression.

The stones inspired Longstreth’s third novel, Boats Against the Current, in which the protagonist is a young, unemployed sculptor in New York City who lands a job with the WPA carving stones at Bear Mountain. On Saturday, Oct. 29, at 2 p.m. the Garrison resident (and Highlands Current Inc. board member) will read at the Desmond-Fish Library from Boats Against The Current — its title taken from the closing sentence of The Great Gatsby: “So we beat on, boats against the current, borne back ceaselessly into the past” — and answer questions about the extensive research that went into it. 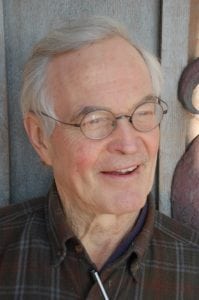 “For sheer fun, nothing at my age beats reading history,” Longstreth has written. “But I have found this pleasure to be greatly enhanced by braiding it with the creation of stories about people who lived through that history.”

After setting his previous novels in antiquity (Scythia for Spindle and Bow in 2005 and the Persian empire for Return of the Shade in 2009), Longstreth says he found himself eager to explore an era of far more recent vintage.

“As with the other books, I had just enough knowledge to know I didn’t know enough so would benefit from researching,” says the author, who, at age 82, was born during the decade the Bear Mountain stones were made. “This gave me an entrance into the WPA. At the time I began working on [the novel], the economy had fallen out of bed.” He even found himself writing an opinion piece about bringing back the WPA, which he calls “a tremendously effective program.”

(Longstreth knows of what he speaks: in 1981 he was appointed by President Ronald Reagan to lead the Securities and Exchange Commission, following a career specializing in corporate and securities law.)

As the retired attorney developed characters and formulated a plot, he spent time at the National Archives and the library at Kansas State University to examine the papers of an outspoken cattleman and “right-wing zealot” who hated President Franklin Roosevelt, who introduced the New Deal.

The story in Boats Against the Current takes shape around a fictional cattleman and his two sons, one a lawyer working for WPA head Harry Hopkins and the other the Bear Mountain sculptor. The Dust Bowl, another symbol of the period, is brought into the story through a character who flees her Texas panhandle home after a particularly severe storm and ends up in New York City, where she becomes a singer and actress. Longstreth said he found the Dust Bowl relevant “because of climate change and man’s demonstrable ability to shoot himself in the foot.”

Another character, a well-to-do woman uncomfortable with her wealth, brings into the story the real-life Huey Long, the Louisiana governor who was viewed as either a demagogue or a populist because of his “Share Our Wealth” redistribution program. 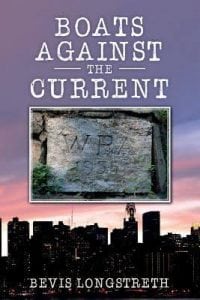 Longstreth also spent a week in the library at George Mason University listening to an oral history of The Theatre Project, a WPA program that created regional theaters and populated them with unemployed artists, writers and directors. (Given his dependence on these and other libraries, it’s not surprising that Longstreth says he considers them to be “temples — the only temples, so librarians are the keepers of the temples.”

Despite the inclusion of prominent historical figures, Longstreth describes his book as also being “fashioned around history that isn’t well-known.” As an example, he notes The Living Newspaper, which was founded by Hallie Flanagan, who organized The Theatre Project. Because there weren’t enough playwrights to keep all the actors busy, Flanagan would take a recent event, such as a Supreme Court decision, and “get someone to write up a play on what had just happened,” Longstreth explained. “With little scenery they were produced just a few days after the event.” One Living Newspaper presentation Longstreth includes in the novel was based on an incident in Newburgh (although he doesn’t mention the city by name) in which a woman enters a police station with a dead infant in her arms. She tells the officers she drowned him because she “couldn’t feed him and couldn’t bear to see him hungry.”

Longstreth is already at work on his next book. “I don’t have a story yet, but it’s about the role of the Hudson River in the Revolutionary War,” he says, clearly relishing the research ahead.

The Desmond-Fish Library is located at the corner of Routes 9D and 403. Call 845-424-3020. For more information about Longstreth’s novels, which are available at Amazon, visit bevislongstreth.com.

One thought on “Finding Truth Before Fiction”