James Matero learned the tools of the jewelry trade as his father and grandfather had before him — in fact, the set of tools that all three men learned with are displayed in a shadow box high on the wall at the family business, Jaymark Jewelry, north of Cold Spring.

The tools of the trade are changing rapidly for the latest generation of jewelers. While his grandfather chipped at wax to form ring shapes and stone settings, Matero constructs them with Computer-Assisted Design (CAD) software. He then creates a wax model using a 3D printer. It is only after this step that traditional methods of casting and finishing are employed. 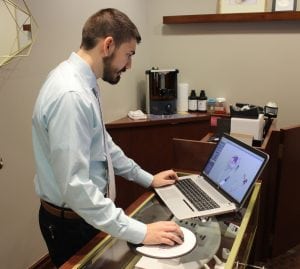 James Matero works on a Computer Assisted Design (CAD) rendering of a ring.  Photo by A. Rooney

The technology has made the craft “so much more exciting,” Matero says. In earlier eras, he says, there was more of an “I trust the jeweler, let’s just do it” attitude. Now, “we’re in the age of communication and instant gratification and people like to feel that they’ve designed things and this is a way to give the client exactly what he or she wants,” he says. “We get requests for everything from taking a photo off a beer napkin to scanning zillions of images to get the idea across. Once the initial design is done, people can see it in different color metals or change the stone, play around in the showroom.”

His sister and co-worker, Katie Szirmay, notes the “CAD gives people a way to really visualize the design they want, and the 3D printer gives them a way to actually hold a prototype.”

Matero says he has been doing CAD work for about nine years. Much more recently he and Szirmay added Skype consultations so that the initial work can be done without the client having to visit Jaymark’s Route 9 showroom and factory, its home for the past 33 years. (The business, one of the oldest in Cold Spring, was initially located a bit further south on Route 9.) 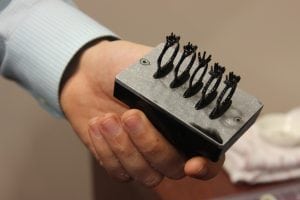 The newest batch of rings-in-the-making emerge from the 3-D printer. (Photo by A. Rooney)

Earlier this year Jaymark installed an Ember 3D printer, a prototype offered to only a handful of jewelers across the nation. It slices designs into layers, with each “cured” by the light, i.e., the light shines in the pattern required for the next layer. A mold is created which is “grown” chemically, in stages. The casting is done elsewhere, as the resin cast is created in metal. They get back a raw cast, which Matero cleans.

For non-custom work, the jewelers put a mold on the piece so it can be replicated. For one-of-a-kind work, they sometimes create the piece in silver. “It’s an extra step in terms of quality so that when we do it in gold or platinum it is perfect,” Matero explains.

A lot of items in the Jaymark cases are custom-made, which accounts for about half of sales. The CAD/3D process usually takes between six and 12 weeks, depending on how quickly the client approves the design. It can be as short as three weeks, one each for designing, casting and honing. 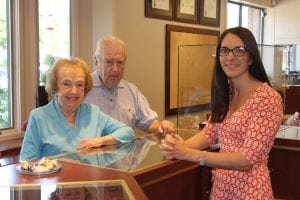 Married for 59 years, and in need of a ring re-sizing for him, longtime Jaymark customers Jeanne and Michael McMahon are helped by  Katie Szirmay. (Photo by A. Rooney)

Matero and Szirmay are fourth-generation jewelers — their great-grandfather began as a hand engraver and charm-maker in Manhattan’s jewelry district and was known for creating intricate miniature chairs and other items. “Miniatures with incredible workmanship,” Szirmay notes. Both siblings graduated from gemology school, although they had a jewelry education growing up.

“Dad gave us free rein and he was forward thinking,” Matero recalls of his father, Jim. “We had a computer system early on, in the late ’90s, and for a small independent store that was unheard of then. Dad instilled the desire in us to grow, change, improve.” Adds Szirmay: “I ask clients, ‘Listen, do you love this? If it’s not perfect, why are you doing this? I want you to not want to take it off.’ ”