If you’ve got an old lamp or record player in the attic that’s been broken for years, but you haven’t been able to get rid of it for sentimental reasons, you’re in luck. The Repair Café is returning the Howland Cultural Center at 477 Main St. in Beacon from 10 a.m. to 2 p.m. Saturday, Oct 29. Experts in woodworking, textiles, electrics, electronics, mechanics and other trades will be on hand to try and fix your broken but beloved items at no charge.

“That phrase, ‘broken but beloved,’ is what people relate to,” says John Wackman of Kingston, who brought the Repair Café movement to the Hudson Valley in 2013. “You see people bringing in items like the stand mixer that their mother used when baking cakes for them while they were growing up…. There are tears of laughter and tears of joy when we get these things running again.” 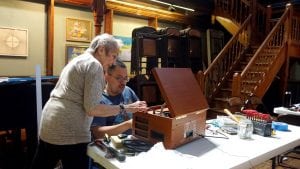 Antony Tseng, one of the organizers of the Beacon Repair Cafe, works on a record player at the first Cafe in May. (Photo by Samantha Tseng)

The first Repair Café took place seven years ago this month in the Netherlands. Its founders saw their event as a reaction against companies making products that are increasingly difficult to open and  repair and then threatening consumers with voided warranties should they try to fix them anyway.

Under those circumstances, many people decide it’s easier to just throw broken items out and buy new ones, despite the significant financial and environmental cost. The cafés also transform the once common art of repair into a radical act, one that Wackman feels is necessary in order to reduce the massive number of objects that make their way into the waste stream each year.

When Wackman learned of the movement, it hadn’t made its way to the U.S. After he relocated to the Hudson Valley, however, he thought he had found the ideal environment to get it started stateside. “I’m continuously impressed by the creativity of people living here, and the sense of community,” he said. “There’s also an extraordinary network of people here who are interested in some aspect of sustainability.”

Those who wish to attend the café are asked to bring in only things that they can carry, and be prepared to stick around for a bit. That’s not only so they can tell the technicians about the item’s history and problems, but so they can watch and learn how to repair the item themselves. While Wackman can’t guarantee that every item will be fixed, he says he will guarantee an interesting time for all those who attend.

While the repairs are free, attendees will be asked to pay for any replacement parts, although they are often not needed. “When we started it, I thought that most items we fixed would need a part replaced,” says Wackman. “And I thought, ‘How are we going to do that? We’re not a hardware store, we don’t have all these spare parts.’ But, in fact, in most cases, the problem is that a connection has been lost, and it simply needs to be restored.”

Wires aren’t the only connection that gets restored. The reason why the events are called Repair Cafés, as opposed to Repair Garages, is that the restoration of social connections the event provides are just as important. Free coffee and tea are on hand, baked goods are for sale, and technicians get a chance to have their skills and talents valued by the community. 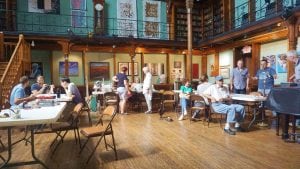 “You’re standing there shoulder-to-shoulder with your neighbor, you’re both getting things fixed, and you’re all trading stories,” says Wackman. “The levels of gratification on both sides of the table are very high.… The phrase that people use most often to describe their experience at a Repair Café isn’t ‘I got something fixed,’ or ‘It was free,’ but ‘That was fun!’ ”

Joyce Hanson brought a broken lamp to the first Beacon Repair Café in May. “Within minutes the switch was replaced and I went home with a working lamp,” she said. “There were many interesting things being repaired, great conversations and wonderful folks. It was so nice to see folks bringing stuff in for repairs rather than dumping them in the trash.”

The Repair Café movement in the Hudson Valley has attracted enough attention that Wackman has been recognized as an “Environmental Champion” by the federal Environmental Protection Agency. Lawmakers are getting in on the act as well. A Fair Repair bill, the first of its kind, is being considered by both the New York State Senate and Assembly. If passed, it would require manufacturers who sell products in New York to provide owners and independent repair shops with access to service information, replacement parts, repair information and the legal ability for consumers to attempt to fix their own products.