Among 99 musicians chosen to perform at bowl game

A Beacon High School student was among 99 musicians from across the country chosen to perform Jan. 7 at the U.S. Army All-American Bowl at the Alamodome in San Antonio. 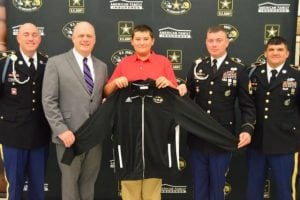 Benjamin Morgan, who plays trumpet, was chosen from among thousands of high school juniors who applied through their band directors. Each applicant submitted a performance video. In addition to the 99 musicians, a committee for the bowl game also selected 25 color guard members and a drum major.

Band members will spend a week in Texas and be paired with a member of the U.S. Army Band. The game will be broadcast on NBC.