The blustery conditions at Philipstown Park on Sunday only heightened the drama that unfolded throughout the Philipstown Boys U11 Strikers game against the Shrub Oak Hawks.

It was an evenly matched game on both sides for much of the hour, with regard to talent, speed and endurance. The score remained 0-0 throughout the first half, as both teams volleyed the ball back and forth consistently. Both teams had opportunities to score but were held back by strong defensive plays and impressive goalie saves.

During the second half, the Strikers played their positions well, letting no goal in from their opponents. But it was the final minutes of the game that truly impressed onlookers when Philipstown’s Jake Powers’ beautiful corner kick was answered by Trajan McCarthy, who chipped the ball into the net, bringing the score to 1-0 for the Philipstown win. It was truly a team effort to keep Shrub Oak scoreless, and the Strikers kept their undefeated status intact.

This week’s boys U16 match-up pitted the home team Philipstown Chargers against the Washingtonville United. From the outset, it became a defensive battle on both sides of the pitch. The Chargers were led by outstanding saves by keeper John O’Donnell, and the defense of Ben Strol, Collin Eng-Wong, Quinn Petkus, Hudson Lovell, Rex Young and stopper, Elias Henderson. The first half had many back-and-forth plays through the midfield, with most opportunities going the Chargers way, but the Washingtonville defense was also up to the challenge.

The visitors were able to sneak in a goal when a ball skirted across the goal mouth to a United winger making the score 0-1 at the half. In the second half, the Chargers turned up the pressure and controlled the pace of the game, creating many opportunities with sharp passing. A half-dozen corner kicks were taken, with near-miss headers by Kyle Mayo and Alek Maasik. Shot after shot went either just wide of the goal or right at the United keeper as the clock wound down.

All players pushed up in the waning minutes but the Chargers could not put a goal on the scoreboard and the game finished Washingtonville 1, Philipstown 0. The Chargers will look to rebound as they head to Goshen on Oct. 30 to face the Orange County Strikers.

U14 Warriors Fall to New Paltz

The Philipstown Boys U14 Warriors took to their home field Sunday for a rematch against the New Paltz Arsenal. Despite a strong effort from goalie, Jack Gordineer and hard defensive work by Owen Edelson, Graeme McGrath, Luca Van Dommele, Paolo Coumans, and Charlie Keegan, the Arsenal scored back-to-back goals in the first minutes of the game.

Warriors midfielders Daniel Carlos, Gael Frezza, Senen Scott-Hamblin, August Lee, and John Weatherup maneuvered the ball away from their opponents with repeated attempts at moving it forward to strikers Zachary Cannova, Christian Moreno and Gus Grossman but Philipstown was unable to score. Arsenal continued to dominate the field and the score steadily climbed for the visitors throughout the game, ending in a 0-7 score in New Paltz’s favor. The Warriors will play Greenwood Lake next Sunday.

The Philipstown Boys U13 Arsenal team hosted rivals the East Fishkill Blue Devils this past weekend. Going into the game, East Fishkill and Philipstown shared the division lead with four wins and one loss apiece and Sunday’s game would decide who move into first place. From the start, Philipstown’s players deftly passed the ball around the field, working together as a unit, but the capable East Fishkill team proved to be hungry, beating Arsenal to the ball on several occasions.

After a physical first half, the score remained tied at zero. In the second half, Philipstown’s strikers Colin August and Stefano Hammond, along with middies Nachamkin, Jasper Drake, Ryan Eng-Wong, Evan Maasik, Stephen Robinson and Roy Smith started to dominate possession. Early on, Drake picked up the ball about 25 yards from the opposition’s goal and moved laterally around two East Fishkill players. He passed to Maasik on the left wing who hit a good ball into the six-yard box to Eng-Wong. Eng-Wong was well positioned to tap the ball home from close range.

At the twelve-minute mark the Blue Devils tied the game with a quality goal of their own. Philipstown refused to allow the momentum to shift in East Fishkill’s direction and stepped up their passing game.

Only three minutes later, Maasik beat a player down the wing, cut in from the left and found Eng-Wong close to the edge of the 18-yard box. Eng-Wong blasted the ball just right and over the East Fishkill goalie to take the lead for the Gunners. Philipstown responded by tightening their defensive efforts and was able to hold East Fishkill off for the remainder of the game. The score at the final whistle was Philipstown 2, East Fishkill 1, and Arsenal now sit alone at the top of their division.

The Philipstown Boys U9 Force team continue their impressive first season with another great road performance versus the Latinos de Pok of Poughkeepsie. The offensive trio of Owen Powers, Lincoln McCarthy and Roth Westphal kept the pressure on the highly skilled Poughkeepsie keeper who, time after time, deftly cleared the ball away. The Poughkeepsie offense also put the pressure on Philipstown, but Bryce O’Halloran, Magnus Dubois and keeper George Stubbs were up for the challenge and cleared away many of Poughkeepsie’s shots on goal.

However, at the end of the first half Poughkeepsie broke through. Confusion by the Force defense allowed space on the left side for penetration and a goal by Poughkeepsie and Philipstown was down 1-0 at the half. Momentum shifted in the second half as the Force offense kept up the pressure, the defense stayed solid and good midfield play by Diego Digillio and Lucky Bell lead to some great chances.

About five minutes into the second half Westphal fielded a ball, turned and drove the final third of the field before powering a shot past the skilled keeper. The last 20 minutes of the game was nonstop action with plenty of chances for both sides but the game ended as a 1-1 tie. This young Force team turned in another great performance that kept parents and fans on their feet the entire match.

On a crisp and windy Sunday, the Philipstown Boys U8 Storm took the field amidst swirls of fallen leaves determined to stop the Yorktown Fire. From the start, each team delivered creative and exciting passes leading to several shots at each goal. Although Yorktown slid past the defense twice in the first half, the Storm’s goalkeeper, Alex Gaugler, made countless diving saves, stopping what could have been a greater deficit. It was an impressive defensive display captained by Griffin Lucca, Langdon Johnson, and with some memorable stops and nifty moves from Lenny Wolfe, who captured the imagination of several fans. 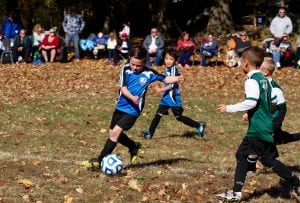 In a U8 soccer matchup on Oct. 23, Joe Demarco of the Philipstown Storm turns the ball around against Yorktown. (Photo by Sheila Williams)

The offensive line played their best game yet, passing to each other on cue, dribbling tirelessly, and pursuing possession of the ball while attacking and scoring. Stalwarts Rhys Williams, Elías Morán, Oliver Sanders, Connor Keegan, and Joseph Demarco looked solid, controlling the midfield and rallying after each setback. Despite Yorktown finishing the game on top at 4-0, Coach Peter Sanders felt great pride today for the Storm’s overall performance as the team never stopped fighting.

For the third straight game, the Philipstown Girls U13 Raptors played short-handed, this time playing two players down for the first 30 minutes of the game. Showing resilience and heart, the Raptors secured a 1-1 tie in an away game against the Shrub Oak Sparta, who had defeated them 4-2 at Haldane in the season’s first game. Once again, the spotlight fell on the goaltending of Raptor Dosi Weed, who was in goal during the Raptors’ triumphant run this past spring.

With the help of defensive stalwarts Mazzie Maxwell, Sophia Scanga, Camille Maglio, Maya Osborn, and Zoe Harris, Weed turned in another scoreless first half, and gave the Raptors time not only to secure two additional players to even up the numbers on the field, but to score the half’s only goal, delivered off the reliable left foot of forward Bianca Harmancin at the 30-minute mark on a counter attack against the Sparta goalie.

During the first half, Raptor midfielders Ella Ashburn, Brynn Martin, and Marissa Scanga covered almost the entire pitch, shifting from defense to offense and shoring up the Raptors’ player deficit with their hustle.

Forwards Harmancin and Emilia Osborn kept the Sparta of Shrub Oak honest, making runs and creating scoring chances. While the Raptors were at full strength on the field for the second half, for the third straight game they lacked substitutes, which played a role in Sparta’s getting the equalizer in the half’s fifteenth minute.

Undeterred, the Raptors continued to push and had the game’s final chance, but a no-call on a Sparta handball in the box ensured that the game would end in a 1-1 tie. Hats off to the Raptors for rising to the challenge of another short-handed game. They return to the field this Sunday at Haldane against the league’s top team, the Town of Cortlandt.