A pipeline that runs a quarter-mile from the Indian Point nuclear power plant near Peekskill is scheduled to begin pumping tons of natural gas Nov. 1, despite protests by residents and activists in several states who say it creates a major safety hazard.

Known as the Algonquin Incremental Market (AIM) pipeline expansion, the 42-inch-wide pipeline is being constructed by Spectra Energy, based in Houston. In New York, it runs through Rockland, Westchester and Putnam counties and under the Hudson River on its way to New England. Spectra says the pipeline will allow “abundant regional natural gas supplies from the Appalachian basin to flow reliably into the [Northeast], helping to meet the increasing demand while lowering energy costs.”

A Spectra map of the pipeline project

In the Hudson Valley, opponents of the project have focused on the pipeline’s route near Indian Point.

“These pipelines do blow up, and they blow up in spectacular ways,” said Cliff Weathers, a spokesman for Riverkeeper, which has led opposition to the project. “There’s no way you can prevent these [chain] explosions.”

Riverkeeper and a coalition of other groups have filed a federal lawsuit challenging the project’s approval by the Federal Energy Regulatory Commission (FERC). That action, which is pending in the U.S. Court of Appeals for the D.C. Circuit, asks the court to issue a stop-work order. The concern, said Weathers, is that the pipeline could “easily be breached.”

“Our government has a legal responsibility to protect the safety of the people who live in the area,” he said. “What Spectra is hoping for is that if the pipeline goes into operation, all this [opposition] becomes moot.” 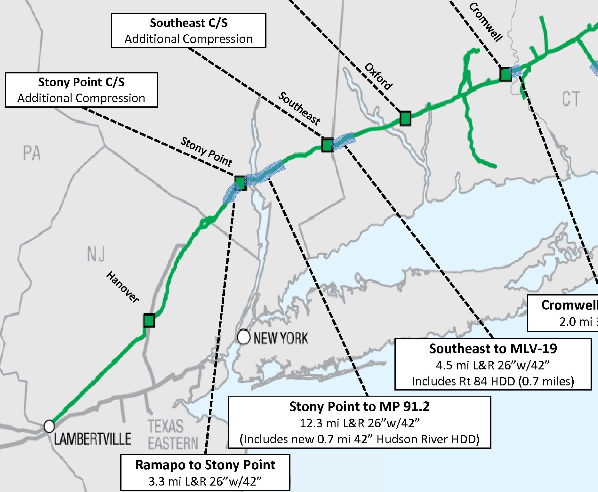 Detail from a Spectra map of the pipeline project

On Oct. 10, four protestors representing another group, Resist Spectra, emerged from the pipeline, where they had holed up for 16 hours after locking themselves to each other. All four were arrested for trespassing.

Activists also blocked the doors on Oct. 26 of the Manhattan offices of U.S. Sen. Chuck Schumer. Fifteen people were arrested.

Jerry Nappi, a spokesman for Indian Point, said the plant has no position on whether the pipeline expansion is necessary. But during construction, engineers at the nuclear plant made a number of suggestions to maximize safety, he said. 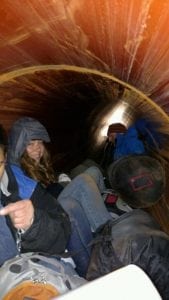 Four Hudson Valley protestors chained themselves together inside the pipeline on Oct. 10. (Photo courtesy of Resist Spectra)

For example, he said, Spectra’s initial route ran too close to the plant, but after being redirected, at its closest point the pipeline is a quarter-mile away. “A failure of that pipeline cannot affect nuclear safety at Indian Point,” Nappi said.

In addition, Indian Point requested a number of enhancements, he said, such as the placement of concrete slabs over the pipeline and the use of enhanced metal and steel in its construction. The line is also buried deeper under the river in the area closest to Indian Point.

Opponents argue the pipe was not sufficiently inspected before being placed under the Hudson. In January 2015, FERC  issued an Environmental Impact Statement which concluded that while construction and operation of the pipeline had “some adverse environmental impacts,” most had been reduced to “less-than-significant levels.”

In its lawsuit, the Riverkeeper coalition asserts that FERC based its conclusion on a faulty analysis by the Entergy Corp., which owns Indian Point, and the Nuclear Regulatory Commission. In papers filed with the Court of Appeals, Riverkeeper says the analysis greatly underestimates the blast radius of a pipeline explosion.

“If the AIM pipeline explodes, Indian Point will go with it,” said Jennifer McCave, a Riverkeeper attorney. She said the organization wants the court to order an independent engineering analysis of the risks.

Protestors have organized against the project in other states, as well. In West Roxbury, Massachusetts, they have pushed for a pipeline spur to be rerouted because it passes near residential areas and an active quarry where dynamite is used. In June, Karenna Gore, the daughter of former Vice President Al Gore, was one of 23 people arrested at a protest there. 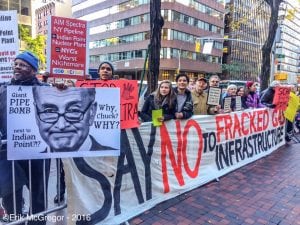 A group of elected officials from Boston, including the mayor, have also fought the project in federal court but lost an important decision in September over FERC’s power under a 1938 act to seize property under eminent domain for interstate projects it has approved.