The Beacon girls’ soccer team has two players, senior Gabby Lucas and junior Chloe Antalek, whose mothers were members of the 1989 Bulldogs team that won the league and Class B section titles. Nicole Petrie Lucas (2003) and Stacey McKeon Antalek (2012) have both been inducted into the Beacon High School Athletic Hall of Fame. 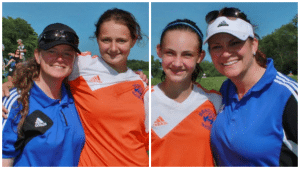 The girls’ squad, seeded seventh in the opening round of the state Class A tournament, suffered a disappointing loss Oct. 22 to No. 10 Byram Hills, losing at Armonk on penalty kicks after a 1-1 tie in regulation. The Bulldogs finished 11-6 overall and 8-1 in league play.