That’s the premise and tag line of a new TBS science-fiction comedy, People of Earth, which premieres its first two episodes at 9 p.m. Monday, Oct. 31. (The pilot episode is already online; see below.) It stars Wyatt Cenac of The Daily Show as Ozzie Graham, a journalist who travels from New York City to a place that claims to have the most reported cases of alien abductions on the East Coast: Beacon, New York.

At one point, a conspiracy buff warns Graham the town is a victim of “alien dickery,” by which he means extraterrestrials are toying with its residents.

As far as The Current could ascertain, Beacon doesn’t have any reported cases of alien abductions. But David Jenkins, the show’s creator, says he couldn’t resist.

“The name ‘Beacon’ is alien bait,” he said. “I can’t believe this is the first alien show set in Beacon, actually.” 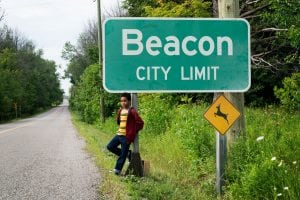 The character Otto Graham sees a vision of himself as a child on the outskirts of Beacon. (photo provided)

The city’s name isn’t the only reason Jenkins chose to set the show in Beacon. “It’s close enough to New York City to get some city folk, but it also has a diverse community of locals,” he said. “It’s not a small, hick town. It’s a little city full of people who work in many different professions and take themselves seriously.”

Don’t expect to see actors or aliens hanging out at the Yankee Clipper Diner. The ensemble cast, not to mention the occasional need for a levitating car or a talking deer, pushed the budget out of range for on-site production. So like many other television series, the crew took advantage of Canada’s generous tax breaks and filmed in Ontario, with Toronto neighborhoods standing in for Beacon.

“I live in Queens, so I would have loved to have shot this in New York State,” said Jenkins. “I was very vocal about trying to get the show made here. But we have a reasonably small budget for the kind of show we’re trying to make.”

Jenkins said the Beacon in the show isn’t supposed to be Beacon anyway, but a perfect combination of Hudson Valley towns such as Beacon, Athens, Tivoli and Woodstock. “It’s a mish-mosh of things that define the Hudson Valley for me: Pine trees, small churches, busy town centers, farmers and former Brooklynites.”

So the Perfect Bean coffee shop isn’t a stand-in for Bank Square. Hawthorne Road, the rural road that leads into town where much of the alien dickery takes place, isn’t another Route 9D. And the Beacon Gazette, the newspaper that employs the protagonist, isn’t a stand-in for The Current, which means this paper isn’t a pawn in a 200-year-old sinister plot by aliens to take over earth, so don’t send us any more letters about it. 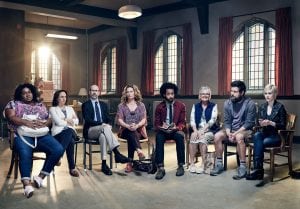 The cast of TBS’s People of Earth (photo provided)

Eagle-eyed viewers will catch a few sly references to Beacon, such as a hand-drawn map of the city showing the sites of alien abductions or a Beacon Rebels baseball shirt with a raccoon on it, a nod to the Hudson Valley Renegades and their mascot. “You’re the first person to have noticed that,” Jenkins said.

In the show, Cenac’s character falls in with a support group called StarCrossed for those who have had alien encounters or, as the members prefer to call them, “experiences.” Although skeptical of their claims, eerie similarities in all of their stories lead the reporter to wonder if there might be truth to their claims, especially after he learns that he may have more in common with the group than he thought. It’s that unlikely camaraderie among the group members that served as the inspiration for the show.

“I read an article about real-life alien abduction support groups, and it just fascinated me,” said Jenkins. “All of the people seemed relatively reasonable and sane, except they swore they’d been taken by aliens. That just seemed like such an interesting, unusual setting for an ensemble comedy. I was also moved by the thought that these people really need each other. They’ve all experienced something that no one will possibly believe. Who can they turn to but each other?” 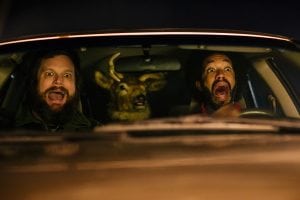 While writing the series, Jenkins looked to Close Encounters of the Third Kind and The X-Files for inspiration, particularly in the way they kept their extraterrestrial premises grounded by focusing on the human elements.

“They keep a lot of the fantastical stuff off-screen, undoubtedly for budgetary constraints,” he said. “But when you don’t have the money to build some fantastical CG [computer-generated] aliens or thousands of spaceships, the story becomes about how people are processing these things. To me, Richard Dreyfus making a mountain out of mashed potatoes [in Close Encounters] is way more interesting than a squadron of generic spaceships blowing up.”

People of Earth’s first season will run for 10 episodes. Jenkins says he hopes the show will be renewed because he knows how he’d like it to end. “It would be great to have five seasons to tell this story,” he said. “My student loans would certainly love that.”