Asserts county attorney should not be local judge

The Conservative Party of Putnam County has sued a Philipstown town justice candidate and the county ethics board, claiming her job as an attorney with the county conflicts with serving as a local judge, and that the board’s approval of her campaign was “illegal” and “improper.”

The Putnam County Board of Ethics ruled June 1 that it saw no conflict of interest for Faye Thorpe, who is chief counsel of the Putnam County Department of Social Services, to take the bench as a Philipstown town justice should she win the election Nov. 8 against Camille Linson, an attorney in private practice. Thorpe is running on the Republican and Independence party lines.

In an email, Thorpe said she viewed the lawsuit as frivolous. “I am confident that the court will rule in my favor as this case is totally without merit,” she wrote in response to questions from The Current. “Clearly, this frivolous lawsuit is an attempt to use the courts for political purposes and create an ethical cloud over my candidacy. I know that the voters of the Town of Philipstown are above such mudslinging and will turn out on Election Day [Nov. 8] and vote for the person they feel is best qualified.” 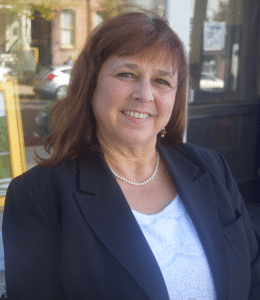 The suit was filed Sept. 26 against Thorpe in the Putnam County Supreme Court and amended Oct. 20 to name the ethics board as a co-defendant. After Thorpe asked a judge to dismiss the case, the Conservative Party responded Oct. 31, which is when The Current first learned of the action from a source unrelated to the lawsuit or the campaign. The party has about 2,000 members in Putnam County. The Conservative Party of Philipstown has about 165 members, said its chairman, Keith Anderson.

If the lawsuit is upheld after the election, and Thorpe wins the seat, she would presumably need to resign from one of the two positions. But Thorpe expressed confidence she will prevail.

The conflict began in June when, according to Anderson, the Conservative Party of Putnam County wrote to County Executive MaryEllen Odell raising concerns about a conflict of interest if Thorpe were elected as Philipstown town justice. In a brief interview, William Spain Jr., a Mahopac attorney who represents the party and serves as its secretary, declined comment on the specifics but said the party has concerns about any attorney involved with prosecutions also serving as a local judge. 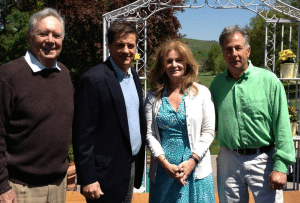 County Executive MaryEllen Odell with members of the Conservative Party of Putnam County after she received the party’s endorsement in 2014.

In arguing that Thorpe would have a conflict of interest, Anderson cited an opinion from January 2015 by the state Advisory Committee on Judicial Ethics in which a deputy attorney from an unnamed county asked if he could also work part-time as a city judge. The five-member committee ruled it was not a conflict as long as the attorney was not required in his or her county position “to perform quasi-prosecutorial duties, such as handling juvenile delinquency and persons-in-need-of-supervision cases.”

Thorpe says this opinion does not apply to her situation. “I am not a County Attorney, I am a Department of Social Services attorney and, as such, I have different duties and responsibilities,” she wrote in an email. “The ‘quasi-prosecutorial’ duties that the advisory opinion refers to are juvenile delinquency and person-in-need-of-supervision (PINS) cases which are solely handled by the County Attorney’s Office. As counsel for the Department of Social Services, I do not handle these cases.”

On a separate track, the Conservative Party of Philipstown learned in July that a nominating petition had been filed with the Putnam County Board of Elections to place Thorpe’s name on the Conservative Party line on the Nov. 8 ballot. Anderson filed an objection with the board, noting the party uses a vote of its membership, known as a caucus, rather than a petition, to choose local candidates. According to state election law, a party may require a caucus in any town in a county with fewer than 750,000 residents. Putnam County has about 99,000 residents.

Thorpe said the petition was filed without her knowledge. A copy included in a court filing shows the names, addresses and signatures of 15 Cold Spring voters apparently approached on or near Main Street by Sarah Greene, a Carmel resident who signed the form and identified herself as an “enrolled voter of the Conservative Party.” She is the wife of John Greene, president of the Putnam County Young Republican Club. Reached by phone, John Greene said his wife was unavailable but that he had no knowledge of the petition or lawsuit. “I’m busy keeping up with the Republicans,” he said. Sarah Greene did not return a phone message left with her husband. 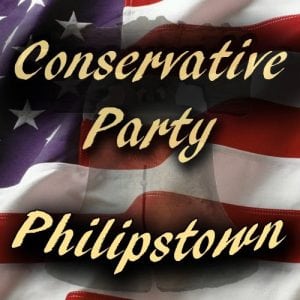 The logo of the Conservative Party of Philipstown

According to court filings, Thorpe did pursue the Conservative Party line through the caucus process. In an email to Anderson dated June 13, she asked for “an opportunity to discuss with your party their potential endorsement of me as town judge.” Anderson responded: “We have oodles of time for the Conservative endorsement because we use a caucus and do not need to run petitions. I intend on inviting you down to talk to everyone in the next few weeks.” Thorpe replied, “Thank you, will do!”

After considering Anderson’s objection to the petition, the two Putnam County election commissioners — Republican Anthony Scannapieco Jr. and Democrat Catherine Croft — split their vote, and it was dismissed. (Both commissioners must agree for an objection to be upheld; Croft agreed while Scannapieco disagreed, citing “case law.” Croft asked to see the case law, according to the meeting minutes, but Scannapieco replied that it  “was not part of the commissioners’ petition review but would be provided if the matter went to court.”)

After Anderson’s objection was dismissed, he sued in Putnam Supreme Court with the backing of the Conservative Party of Putnam County, naming Thorpe and the board, and citing the election law. Thorpe did not disavow the petition but argued the party was attempting to “chill” the right of free speech and association for herself and the people who signed it. She also objected to a party member serving as the party’s attorney and argued that Anderson had no standing to sue. 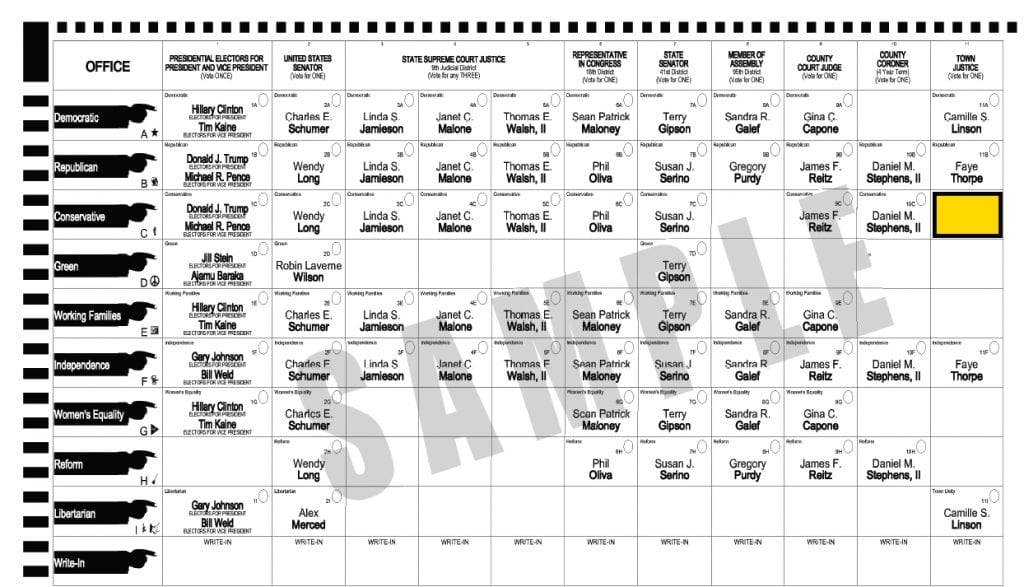 The Conservative Party line on the Nov. 8 ballot, shown in yellow, does not contain the name of a town justice candidate.

On Aug. 9, Justice Paul Marx ruled for the Conservative Party and invalidated the petition but declined the party’s demand that Thorpe pay sanctions and its legal fees. He prohibited the board from placing Thorpe’s name on the Conservative line, and no candidate appears there on the ballot. (At the request of the county attorney, Marx also struck from the public record of his decision what the judge characterized as “personal attacks” against commissioner Scannapieco, who voted against the objection.)

A week later, Thorpe met with members of the Conservative Party of Philipstown to ask for the party endorsement, according to Anderson, but he said as chairman he decided not to call a caucus because he didn’t feel the Philipstown party had a candidate who was “up to speed on judicial ethics,” a reference to the view that Thorpe has a conflict of interest. Anderson noted that the party leadership also met with Camille Linson — whom he personally endorsed — but he did not call a caucus because he feared Thorpe might end up on the Conservative line, which he felt would reflect badly on the party given its public concerns about her candidacy.

“I’m not trying to do evil to anyone,” Anderson said Nov. 2 of the conflict with Thorpe. “I’m just trying to see that the right thing gets done.”

On Sept. 26, six weeks after Justice Marx’s decision, the Conservative Party of Putnam County again sued Thorpe in the Supreme Court, arguing the ethics board ruling that saw no conflict of interest was illegal. (Anderson said the local and county party leadership often “work in their own direction,” and that he learned from Thorpe that the county party had sued her.)

In its June 1 ruling, ethics board chair Robert Bickford wrote that the board had weighed Thorpe’s desire to be a Philipstown town justice against a provision of the county Code of Ethics that prohibits county officers or employees from taking or failing to take “any action which he or she knows or has reason to know may result in a personal financial benefit for any of the following persons: (1) the county officer or employee; (2) a member of his or her household, (3) his or her outside employer or business; (4) a relative; or (5) a customer or client.” The board ruled that “neither your candidacy nor your service” would violate that specific provision.

Bickford added that “since on occasion your service as Philipstown judge, if you are elected, may relate to matters before the Putnam County Department of Social Services, it is the opinion of the Board of Ethics that you should recuse yourself from participation in such matters either as a judge or as an employee of the department.”

Nevertheless, the Conservative Party of Putnam County asserts there would be an “obvious” conflict should Thorpe win, presenting scenarios in its court filings in which she encounters the same defendants in both venues and is privy to private information that could prejudice her.

Asked about this, Thorpe wrote in an email: “In the event that a conflict arises, I would handle it the same as any other judge would. I would recuse myself from the matter. However, based on my review of cases that have appeared in both the Town of Philipstown and my office, this event happens rarely.”

Further, the pending lawsuit claims Thorpe “knowingly” violated election law with the petition filed in her name, that Bickford should have recused himself because he was appointed to the board of the Metropolitan Transportation Authority by Odell, ostensibly Thorpe’s boss, and that members of the ethics board had “private conversations” with Thorpe before issuing its opinion.

Thorpe disputed this, writing: “The only conversation I had when I sought an opinion [from the Board of Ethics] was with the director of the Department of Personnel, and only for the purpose of determining the process I needed to go through in order to seek the opinion. This was in no way a violation of election law or any law.”