It was the social-media equivalent of an earthquake on the east end of Beacon’s Main Street. On Monday, Oct. 25, The Hop added a post to its Facebook page: “The Hop is now closed indefinitely. Thank you all for making it a success. Cheers!”

Hours later the Facebook page vanished, a similar message went up on its website, and a hand-drawn sign appeared on the door that read: “So sorry, we’re closed until further notice.”

No further notice has come. The bar closed so suddenly that the tables inside, visible through the large storefront windows, are still set with napkins and cutlery for dinner. On Tuesday, Oct. 26, the building at 554 Main St., which is owned by the founders of the bar, went on the market for $3.6 million. “Priced to sell and completely turn-key!” boasts the listing. “Bring your business or be The Hop!”

Two weeks later, the mystery remains: What happened to The Hop?

The Current reached out numerous times to The Hop’s owners and a number of former employees, all of whom declined to comment, although a former manager said a benefit is being planned for the 30 people who are out of work. 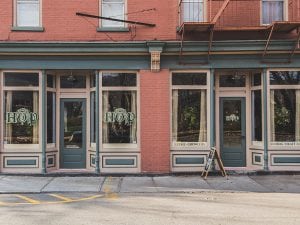 The Hop, shown in a photo taken from its website

Since it opened six years ago at 458 Main St., before moving in 2014 to its most recent location a few blocks away, The Hop never lacked for customers or buzz. It was an anomaly for Beacon at the time: A bar that only sold craft beers, a craft beer store and a restaurant all in one. The Hop acted as a guide to the dizzying arrays of inventive small-batch brews being introduced across the country. It’s rotating selection on tap, a knowledgeable staff and the ability to buy one bottle at a time instead of committing to a six-pack, allowed The Hop to introduce countless locals to their new beers.

The food was good, too. Chef Matt Hutchins took a continental spin on hearty farmhouse cooking, using local products such as cheese from Sprout Creek, polenta from Wild Hive and meat from Barb’s Butchery and providing evidence of the existence of a Hudson Valley Cuisine.

For this, The Hop was feted in the press, visited by Martha Stewart and almost always packed, even after it moved to a space four times larger, added an outdoor pavilion to double its seating capacity in warm weather and removed the takeaway coolers to create more space in the dining room.

3 thoughts on “What Happened to The Hop?”