The Philipstown Boys U13 Arsenal travel soccer team hosted the Red Hook Avalanche on Sunday. Just before the start of the game the weather quickly changed from clear skies to torrential downpour and hopes for the rain to hold out until after the game were dashed. Philipstown took the field with good spirits despite the conditions and quickly set the tone of the game when two minutes in midfielder, Jasper Drake won the ball at the 35-yard line, dribbled around a couple of Avalanche defenders and sent a clever through pass to Evan Maasik who received the gem and deftly touched it past the Red Hook keeper to take an early 1-0 lead for the Gunners.

Twenty-three minutes into the first half, Philipstown’s Matthew Nachamkin won possession in the midfield and passed a beauty to Maasik who was 30-yards out. Maasik hit a low, hard ball to teammate, Ryan Eng-Wong who blasted a shot into the upper right corner of the Avalanche goal from ten yards out. Philipstown’s defense were in sync with each other the entire game, working together to stymie all of Red Hook’s attempts on the Arsenal goal and goalkeeper, Danny Urbanak made a handful of diving saves to maintain a shut-out for the home team. Later, consistent thunder and lightning meant the game was unable to be completed and Philipstown left the soggy field with a 2-0 win, bringing their record this season to 6-1.

The stars aligned this week for the young Philipstown Boys U11 Strikers, as the team headed to Kingston and proceeded to dominate their opponent throughout much of the game. The Strikers have truly come together as a team, with communication, passing and footwork making up the core strengths of these players. Yes, the team remains undefeated, yes the majority of these boys have scored multiple times this season, but what really stood out today in the team’s 10-3 win over the Kingston Attack, was their sportsmanship.

Late into the second half, Coach Danielle Pack McCarthy opted to spend the remainder of the game working on passing and footwork skills, rather than racking up more goals against their opponent. With celebrations remaining minimal, they continued to work together as a team, talking to one another and passing like a professional soccer team would do. The parents of these young players watched with pride, knowing it was no longer about the score, but rather about the team truly enjoying playing with one another.

When it was all said and done, the Strikers came away with the win, with two goals from Trajan McCarthy, one from Max Westphal, two from Jake Powers and another from Frankie DiGiglio, while Jeremy Hall had the first hat trick of his fall soccer career, with three goals scored in one game. But defender Vlad Saban had the goal of the game, scoring a beautiful penalty kick against the Attack, earning himself a wonderful birthday present. Amazing defense was on display from Liam Gaugler and Luca DiLello, along with a handful of beautiful saves by goalie Ronan Kiter, kept most of the game in offensive territory. And the footwork skills from Colin Delabie were impressive to say the least. Each member of the team brought something to the table that garnered this strong win. The Strikers, led by coaches McCarthy and Kristina DiGiglio, remain undefeated this season, with a 7-0 record.

U9 Force Show Major Improvement but Come up Short

What an impressive matchup for the Philipstown Boys U9 Force as they played the Kingston Thunder for the second time this season. The Force took an early lead when midfielder, Roth Westphal dribbled with confidence past several Kingston defenders. When the ball got away from Westphal, the Force showed just what teamwork really means as Owen Powers and Lincoln McCarthy battled with Kingston defenders until the ball landed in the net, and the Force were up 1-0. Philipstown held on to this lead for the remainder of the half, and were seeming like the dominant team.

But Kingston came into the second half ready and were relentless with shots against Force goalie, George Stubbs. Stubbs had some outstanding saves but in the end, Kingston delivered two strong goals, won the second half, and the game. Coaches Danielle Pack McCarthy and Dirk Westphal assured the team that this match goes down as a victory in their books as earlier in the season, the quality Kingston team had beaten the Force 7-1. This kind of improvement gives the Force something to celebrate.

On a perfect fall day in Newburgh, the Philipstown Boys U8 Storm met the Newburgh Pumas for the second time this season. The Pumas, had previously beaten the Storm 3-0 but what a difference a month makes. A more organized, cool, and confident Team Storm controlled, and out-hustled the Newburgh to the very end. They connected passes to their open man, sustained long stretches of brilliant dribbling, and performed defensive blocks as well as give and go plays, outshooting the opponent by a wide margin. The Storm fans were treated to an inspiring and thrilling soccer match. 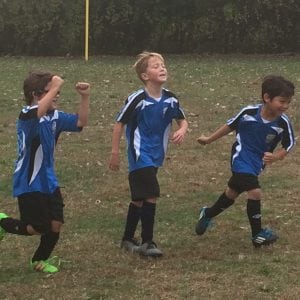 Alex Gaugler made diving catches to stop close-up shots from entering the goal. On defense, Griffin Lucca and Lenny Wolfe made a tough wall to stop the Pumas from getting through. Moreover, it was the magical and brilliant combination on offense from Parker Larsen, Oliver Sanders, Joey DeMarco, and Connor Keegan who impressed onlookers with their hustle and breakaway passes. The highlight of the game came when, down 2-0 after the first half, Sanders at midfield passed a beauty through two defenders to Parker Larsen, who then dribbled it effortlessly sixty yards downfield with two defenders on him and cranked the ball left side past the goalie. The Storm had scored their first goal of the season!

The last minutes were spent taking shots at their adversary but coming up short. Team Storm fought and played their tails off. Coach Sanders and staff were incredibly proud and the parents and fans was equally enthralled. Final score Newburgh 2, Philipstown 1.

After tying the division’s second-place team last week playing just nine players in the first half, the Philipstown Girls U13 Raptors were primed for their tussle with the first-place T-Cortlandt Riveters. Their energy showed, scoring the game’s first goal and then holding the lead through most of the first half, before succumbing to a deluge of rain and goals. When the final whistle blew, the soaked and freezing Raptors were on the short-end of a 4-1 loss to the aggressive Riveters. The Raptors hit the ground running scoring in the game’s third minute on a counterattack goal that went from midfielder Brynn Martin to left forward Bianca Harmancin, who led the ball beautifully to right forward Emilia Osborn. Osborn, who had shaded over to the left side, sent the ball from left to right past the diving Riveter goalie, the division’s best, and into the goal’s right corner. 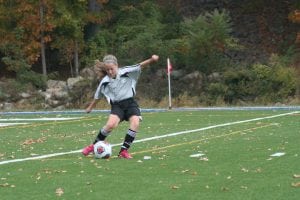 With tough defense, the Raptors kept the Riveters in check for the next 26 minutes, as Raptor goalie Dosi Weed turned back several Riveter volleys from the Riveters right side, assisted by left defensive backs Mazzie Maxwell and Zoe Harris, as well as sweeper Sophia Scanga. Indeed, the Riveters also have the division’s top scorer, and Raptor right defensive backs Maya Osborn and Eden Feinstein, as well as Camille Maglio and Marissa Scanga, shut her out for the first time this season, as they prevented her from even having a shot on goal. The Raptors luck ran out in the game’s 29th minute, after a tremendous save by Weed rebounded to the foot of a Riveter forward, who calmly sent the ball into the back of the net to tie the score. Minutes later, in the half’s final minutes, and with the skies threatening, the Riveters notched their second goal, for a 2-1 lead at halftime. The second half began in a downpour that never let up until game’s end.

The Raptors had their chances in the second half, led in part by midfielders Ella Ashburn, Katie Shields and Martin, who continued to cover a lot of turf, sending balls forward for counterattacks that were thwarted by the tough Riveter backline. Inspired by their defense and seeming to thrive in the downpour, the Riveters owned the second half scoring, with two goals for the final 4-1 score. The Raptors left the pitch cold and wet, but proud to have played a tough team tough under trying conditions. They look to bounce back this Sunday away against LaGrange.

The Philipstown Girls U12 Phoenix traveled to Newburgh this past Sunday to play the Algonquin Chelsea. It was an even match at the start, with both teams producing some great opportunities. The Phoenix defenders, Clara Tripp, Isabella Lukic, Walker Tinsley, and Josie Foley-Hedlund kept Chelsea at bay while Maggie Gordineer had a few amazing saves in net. Unfortunately, later in the half, Algonquin Chelsea were able to break through and by the end of the first half, Philipstown was trailing 2-0. As the second half whistle blew, the rain rolled in, and it wasn’t long before the girls were playing in a downpour.

Things got tricky, but Vanja Booth, Gordineer, and Caroline Nelson each anchored the Phoenix in the center midfield position. Each girl fed balls to the outside midfielders and strikers, Finola Kiter, Dylan Ambrose, Amber Skye-Korcz, Megan Ferreira, and Morgan Serrand, that generated some momentum on the offensive side. Unfortunately, the Phoenix just couldn’t find the back of the net. Ruby Poses, second-half goalkeeper for the Phoenix, made a number of strong saves in the muddy mess of a game. However, Algonquin Chelsea tallied two more before the final whistle, taking the game 4-0.