Officers are stepping down, but who will step up?

The president and vice president of the Cold Spring Area Chamber of Commerce plan to step down at the end of the year, leaving the organization with a crucial question: Who will step up?

About a third of the chamber’s 90 members met at Glynwood on Nov. 2 to consider that question, as well to discuss the volunteer-run Chamber’s role in the community, who it serves and how to define success.

However, without sweat equity, said Vice President Jillian Bono-Kelly, nothing much will be done. 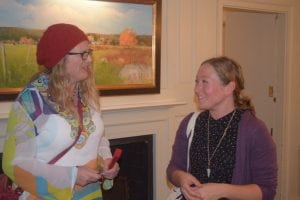 Village resident Rich Franco questioned whether the Chamber has adequately defined its goals. “What do you want to accomplish?” he asked. It was the first and most poignant question of the evening.

“The Chamber needs more focus,” outgoing President Alison Anthoine said after the meeting, citing the Chamber-sponsored Summer Sunset Music Series as an example of how the organization has sometimes continued existing programs without considering their purpose. “Should we keep the music series? People, especially seniors, like it but Main Street shop owners don’t. We’ve never done the critical thinking necessary.”

Ironically, the brainstorming session also suffered from a lack of focus after the facilitator who was supposed to lead it had to cancel at the last minute. Despite that, a number of issues emerged that participants seemed to agree are key to the Chamber’s future:

After those and other issues were raised, Bono-Kelly returned to a familiar theme. “All these comments go right back to my main question,” she said. “Who wants to help?”

Jonathan Kruk, a former Chamber president, said that in the past when participation waned, enthusiasm was rekindled simply by having a party for members. At least one person took exception to that, commenting that a  common perception of the Chamber is that it hosts too many social events. 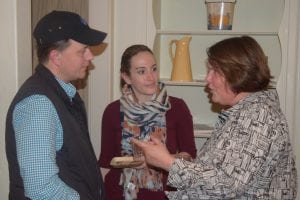 The evening did produce a number of practical ideas.

The Hudson Valley Federal Credit Union, a new member, sponsored the evening and made a brief presentation on  cash-flow basics that small businesses need to consider. HVFCU’s small-business expertise could prove to be a valuable asset to Chamber members.

Another new member, Dana Whiddon, offered to host a freelancers’ forum at CREATE Community, a shared workspace being planned on Peekskill Road.

Eliza Starbuck, who with Eric Worth is opening a wine shop on Main Street, presented a model that could help frame the Chamber’s resurgence. She compared the organization to a farm CSA in which members pay a fee but are also required to work to reap the benefits — in that case fresh vegetables. She said it’s a model the Chamber can learn from.

“You have to have a work requirement for your membership,” she said. “As a member I want to give as much as I get. Business owners should feel some responsibility.”

Another member suggested that the Chamber emulate the Haldane School Foundation, which has its members work on projects in pairs as a means of sharing the workload and preventing burn-out.

Kim Blacklock, president of HG Fairfield Arts Board in Brewster, said her organization planned to host a symposium this winter for chambers of commerce and nonprofits. “We’re pulling the symposium together because this conversation is happening everywhere, and it’s about sharing resources,” she said.

Anthoine said a serious discussion of the Chamber’s future, and even its existence, “has been a long time coming.” Its annual meeting and holiday party will be held Dec. 16 at Dutchess Manor and will include the election of a new board.

“We hope to get some real volunteers to step up and join the board, people who will volunteer to actually execute ideas and plans,” she said. “I hope the Chamber continues — it does have value.”

Inquiries can be sent to [email protected]