The last two weeks of October proved more hectic than usual for Cold Spring and North Highlands firefighters, who responded to five emergency calls from hikers that included a fatal heart attack, a rescue from a ledge and a minor injury to a first responder struck by a vehicle on Route 9D.

The situation along Route 9D is becoming increasingly hazardous, according to Cold Spring Chief Steve Smith, who said the volume of vehicular and pedestrian traffic, along with the cars parked along the road, “is getting out of control.”

Smith said the situation has been discussed at design meetings for the Hudson Highlands Fjord Trail, the walkway being developed to link Cold Spring and Beacon passing by Breakneck Ridge. Part of the problem is that New York state law states that “if there’s room on the shoulder of the road, you can legally park there,” he said. “If there’s no signage saying ‘No Parking,’ then they can park.” 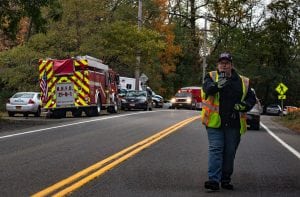 Emergency vehicles at the Little Stony Point trailhead during a rescue on Oct. 26 (Photo by Anita Peltonen)

The chief recalled a recent weekend when cars were parked bumper-to-bumper along both sides of 9D from the Breakneck tunnel north almost to Dutchess Manor, a distance of more than a mile. He said Fjord Trail planners have told him they will eliminate parking on the shoulder. But he wondered if signage couldn’t be done sooner. “My biggest question is still, who’s going to enforce it?” he said.

Smith also said officials could limit the number of hikers on Breakneck at any one time. “We watch them get off the train” at the Breakneck whistle stop, he said. “It’s like a herd of ants coming up the hill. The first person wants to be in the woods first because they don’t want to be stuck behind everybody else.”

On some occasions the CSFC has closed the Breakneck trail during a rescue. “That’s our call,” he said. “We take control because it’s our guys who are at risk up there.” Smith said that he wishes traffic could be slowed when firefighters are in the area; the speed limit near Breakneck is 55 mph.

One of the most serious safety issues is pedestrian traffic south of Breakneck, says Smith. “North of the tunnel hikers are on the other side of the guardrail,” he said. “But when people come off the trails south of the tunnel or by the Cornish Estate they have to get back to the tunnel” and are forced to walk with no barrier because there is no shoulder. 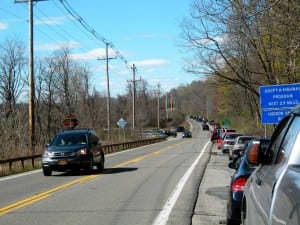 Despite a busy second half of October, Smith said rescues are down overall from last year. “I’m lucky our guys are not exhausted yet,” he said, pointing out that weekend incidents are especially stressful because for many firefighters it cuts into family time.

At a Nov. 1 meeting of the Cold Spring Village Board, Mayor Dave Merandy expressed concern for the safety of first responders, especially in light of the DiNardo injuries. “I don’t think we should wait for the Fjord Trail to be completed” to address the congestion, he said. “It’s a miracle nobody has been killed.”

The mayor said he favors closing the road to parking and limiting parking to designated areas. At the board’s Nov. 8 meeting Merandy said he had spoken with Chief Smith about the DiNardo incident, had contacted Scenic Hudson and would attend an upcoming meeting of the  Fjord Trail Steering Committee to voice his concerns. He suggested residents attend a public meeting on the Fjord Trail scheduled for Monday, Nov. 14, at Dutchess Manor.