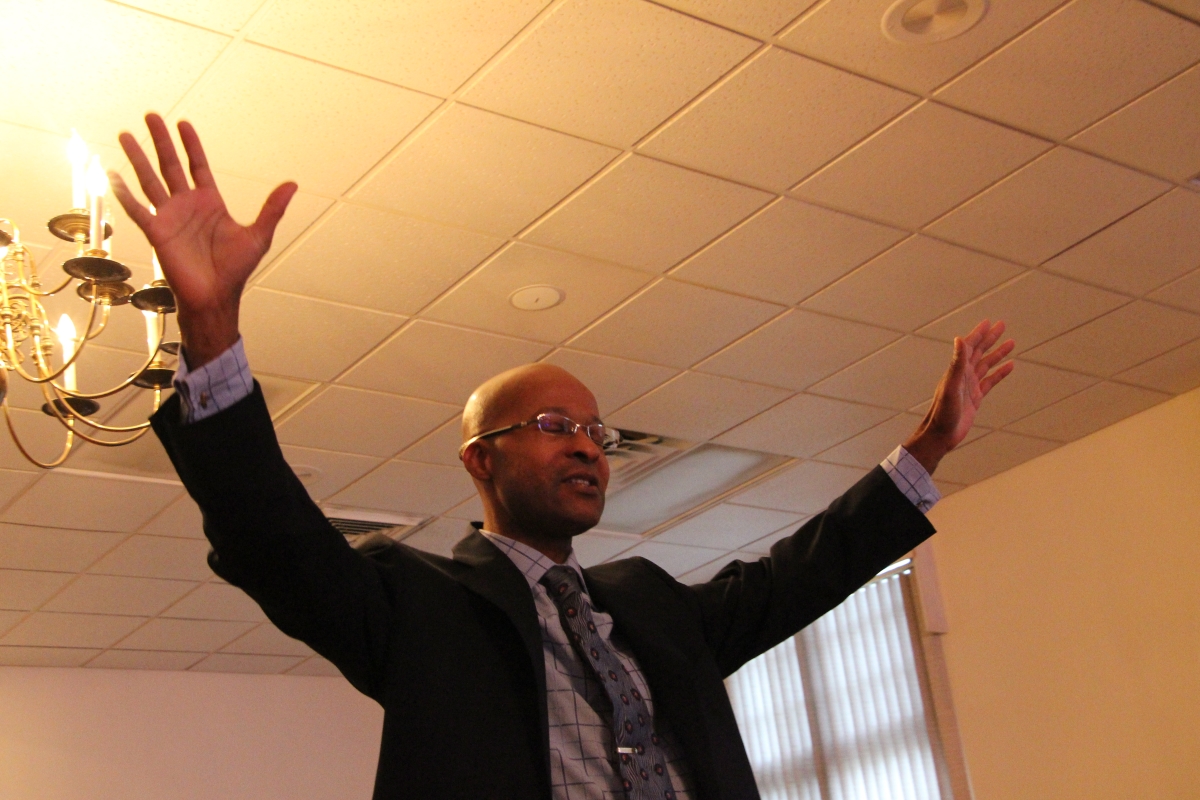 Despite the veil of gray clouds, a team of pastors offering their own brand of sunshine swung open the doors of the Elks Lodge in Peekskill.

Typically booked for meetings and banquets, the lodge each Sunday at 10 a.m. becomes Peak Community Church, led by pastors Robert Lindenberg and David Bass, whose family owned and operated Grand Dry Cleaners in Cold Spring for decades before selling the business in April.

Bass, 52, says he long considered pursuing the ministry. After a career as an attorney and then assisting his father, Henry Bass, with the Cold Spring business adjacent to Foodtown, he decided to start a new chapter in his life. 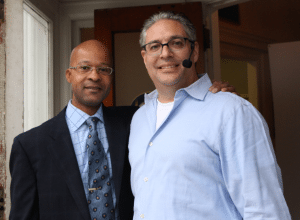 Bass formed his own church, called Shield of Faith, holding Sunday services at the Paramount Hudson Valley down the street from the Elks Lodge. But he soon understood that establishing a church takes not only faith but finances. The Paramount, he says now, “got real expensive. Pastor Rob has a larger congregation and we have different outreaches and we have joined together.”

Bass, wearing a jacket and tie, has a more formal and reserved style than the open-collared and outgoing Lindenberg, an Assemblies of God minister. Their collaboration may resemble an “Odd Couple” pairing, but Bass hopes the contrasts will support their mission.

“Even before I got into the ministry, I hated labels,” Bass explained. “It’s the same with any spiritual service. You don’t have to have the big ‘M’ for Methodist or the big ‘C’ for Catholic. It’s Christian because I preach the word of Christ. That’s how I think about it. Where would Christ be comfortable going to church?” 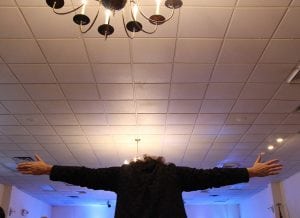 Antoinette Hnatuck, a Peak church member from Lake Carmel, worships at a Sunday service at the Elks Lodge in Peekskill. (Photo by M.A. Ebner)

The services usually begin with gospel music led by the praise team. As worshippers arrived at the Elks Lodge, vocalist Christen Thompson and a band welcomed them with harmony under lights set up by the tech crew. Streams of bright color washed over the stage, transforming the meeting room into a lively prayer hall.

The 50 worshipers sang along with lyrics projected onto a screen behind Lindenberg as he spoke through his headset microphone to the mix of men, women, boys and girls. Bass joined in praise, and all embraced with greetings, handshakes and hugs.

Lindenberg delivered a sermon that reflected on identifying modern-day idols, referring to his own tendency to overindulge in good food.

“We live in a country where our stomachs can become our idol,” he said as he reached around his waistband and smiled at his wife, Eunice, who was seated in the front row. “I’m running around a lot and I eat lunch out, my wife cooks really good food, and we eat really well. If we analyze that, this is my go-to, this is my guilty pleasure.” 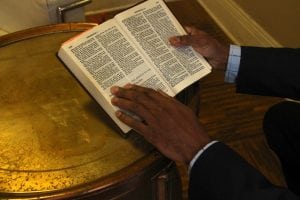 Pastor David Bass formed the non-denominational Shield of Faith in 2016. It recently joined with The Peak Community Church. (Phot by M.A. Ebner)

Bass and members of the congregation nodded in agreement.

The former dry cleaner, who lives in Cortlandt Manor, was ordained in 2001 in a small church in Atlanta. He says he was inspired by Ephesians 6: 10-20 (“Put on the full armor of God, so that you can take your stand against the devil’s schemes…”) to take up a shield of faith as “my foundation to be used by God to help deliver people from spiritual warfare. I’m willing to be submissive. I’m an ordinary guy called to do something extraordinary.” 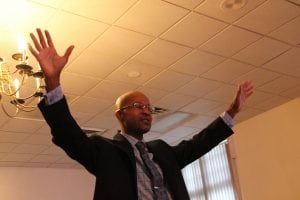 Though the pastor knows many people in Cortlandt Manor, as well as the Cold Spring and Garrison residents who frequented Grand Dry Cleaners, he says he knows building a community of faith will take time. Friends and business associates have wished him well, but they’re not flocking to his services. Most are spiritually rooted elsewhere. In the dry-cleaning business, customer loyalty keeps a business afloat, he says, and so it goes with growing a church.

“I am very faithful,” Bass said. “I know I am doing what God has called me to do. It’s not easy for me and I have to be vigilant. I have to go about and preach the gospel boldly, but I’m confident that the word will get out and the congregation will grow.”