One win away from playing for Class D state championship

After winning the Section 1, Class D championship game Nov. 5, the Haldane football team advanced Nov. 12 to the final four with a 14-6 victory in Kingston over Section 9 champ Roscoe/Downsville/Livingston Manor. 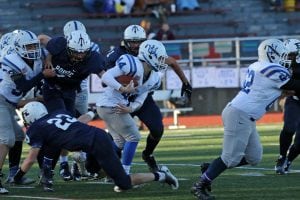 Sam Giachinta (44) carries the ball against Roscoe behind a block by VJ Fina (62). (Photo by Michael Haines)

The last time the program won two state tournament games was 2007. The team that won tournament games before that was the 2000 squad, when Coach Ryan McConville was a sophomore linebacker for the Blue Devils.

Haldane (3-6) next plays at 4 p.m. Friday, Nov. 18 against the Section 2 champion, Cambridge (11-0), which defeated Ticonderoga, 55-28 and is ranked second in the state in Class D. The game will be at Dietz Stadium in Kingston. Cambridge is an offensive powerhouse that has won each of its games by at least 27 points and scored at least 50 points in 8 of 11 contests.

In the victory of Roscoe, quarterback Brandon Twoguns started the game in the first quarter with a 70-yard touchdown run. Roscoe scored in the second quarter but Sam Giachinta clinched the win in the fourth quarter with a 12-yard run. He finished with 144 yards on 21 attempts.

To advertise with The Current, see our Rate Sheet or email [email protected]andscurrent.org. Note: Our circulation is audited. Ask for details.