Flowery prose might capture “the music of the Hudson” in a figurative way, but Fathom, a composition with melodic content and lyrics by Mimi Goese and a score by Ben Neill, takes the literal route, using data collected from the river via sensors and translating the patterns into music.

Fathom, a collaboration between the musicians and the Beacon Institute for Rivers and Estuaries (BIRE), will premiere at 7:30 p.m. on Thursday, Nov. 17, during a free performance at the Towne Crier Café as the concluding event in BIRE’s Science Café series. (To reserve tickets, visit townecrier.com.)

The idea for the unusual collaboration came from a conversation between Neill and BIRE founder John Cronin, who thought some form of art could be made from the reams of environmental data that BIRE collects.

When Neill suggested music, BIRE’s Terry Platz directed him to data collected from the Hudson during Hurricane Sandy, not only because of the dramatic nature of the 2012 storm but because of the profound changes it wrought. “The bottom part of the river was moved by the storm and has never moved back,” Goese explains. 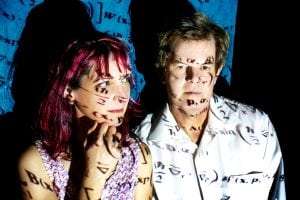 Neill and Goese focused on a five-week span of data that began two weeks before the storm hit the Hudson Valley. Using information collected from seven sites between West Point and the Adirondacks, Neill devoted six sections of Fathom to pre-storm data and a seventh to the storm. The data in that section was compressed, “to make it more chaotic,” Neill explains. The balance of the piece takes shape in song, which is where Goese came in.

Demonstrating, in broad strokes how he composed this piece, which encompasses voice, instruments, electronic sound and digital video, Neill points to a screen in his Beacon studio that displayed animations of the data. “We’ve been working on a new project using fractal sounds generated by mathematics,” he says. “When I was asked to do this, I thought of that idea.”

He continues: “Each graphed line becomes correlated with music, the sounds of the notes following the line of data, creating a melody. A screen shot of the graph is taken and Photoshopped so that it is displayed as a white line against a black background, because the first program I use reads black as silence, white as pitch. Then another program can make the sound play on any instrument.

“Liberties are taken with time frame and compression — that’s where the composition comes in. These patterns are going on all the time, they’re the nature of life. It’s a lot of trial and error.”

In writing the lyrics to the six songs that follow the storm, Goese hoped to deliver words and ideas that reflect the history, geography and society of the region. “I wanted to be educated on some of the stories of this place, the dynamism between city and country,” she says. “I don’t remember working on a project where I cared so much what the response would be.” 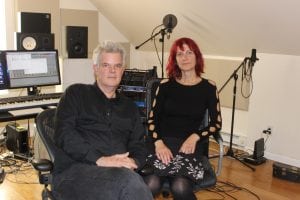 Ben Neill and Mimi Goese (Photo by A. Rooney)

Although the piece focuses on the way humans have encroached on nature, it avoids finger-pointing, Goese says. “The Hudson is the artery: find the heart, realize the trauma, be inviting,” she says. “People care about the Hudson, the expanse of it.”

Fathom is a mixed-media piece, and an important component is projections that run during certain sections. Crowd-sourced footage, all of which reflects “perspectives, experiences and the personal impact of the Hudson River” will be screened as Neill, Goese and drummer Dean Sharp perform the music. Neill will play the mutantrumpet, an instrument of his own design, and Goese will draw from her dance background to keep things moving.

Both Neill and Goese call it important that Fathom is accessible and enjoyable. “It’s not something with a heavy-handed, preachy message,” Neill says. He says he has enjoyed the collaboration with BIRE, which was assisted by a grant from New Music USA. “I’ve learned so much about the science, and Mimi, the history. It’s important to have what you do connect with other things.”