Fishkill Farms in Hopewell Junction will host the Drunken Pumpkin on Saturday, Nov. 19 from 1 to 5 p.m. Six restaurants will offer dishes made with Long Island Cheese Pumpkins produced for a project by Glynwood and Hudson Valley Seed that brings together farmers and restaurants to raise awareness for biodiversity and Hudson Valley food culture. 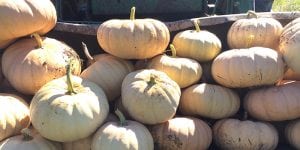 The Long Island Cheese Pumpkin is an American cultivar with a long history but had fallen out of favor in the 20th century. It is good for baking and cooking with a similarity to butternut and crookneck squash.

Tickets are $35 and include six dishes and tastes of dozens of hard ciders, including Fishkill Farms Treasury Cider (introduced in the fall), Brooklyn Cider House and Hudson Valley Farmhouse Cider.