Sightseers have long delighted in Indian Brook Falls, where a Philipstown stream plunges from a cliff to a rocky pool before joining the Hudson River. Part of Hudson Highlands State Park, the site borders private property and the Constitution Marsh Audubon Center and Sanctuary along Indian Brook Road, a curving narrow dirt lane that intersects with Route 9D a mile south of Cold Spring.

In August 1834, Washington Irving led an evening jaunt there after a dinner party at the Cold Spring home of his friend Gouverneur Kemble. As one guest later recalled, Irving provided “elegant and playful” commentary as they “wandered among the rocks of that beautiful and secluded dell.” 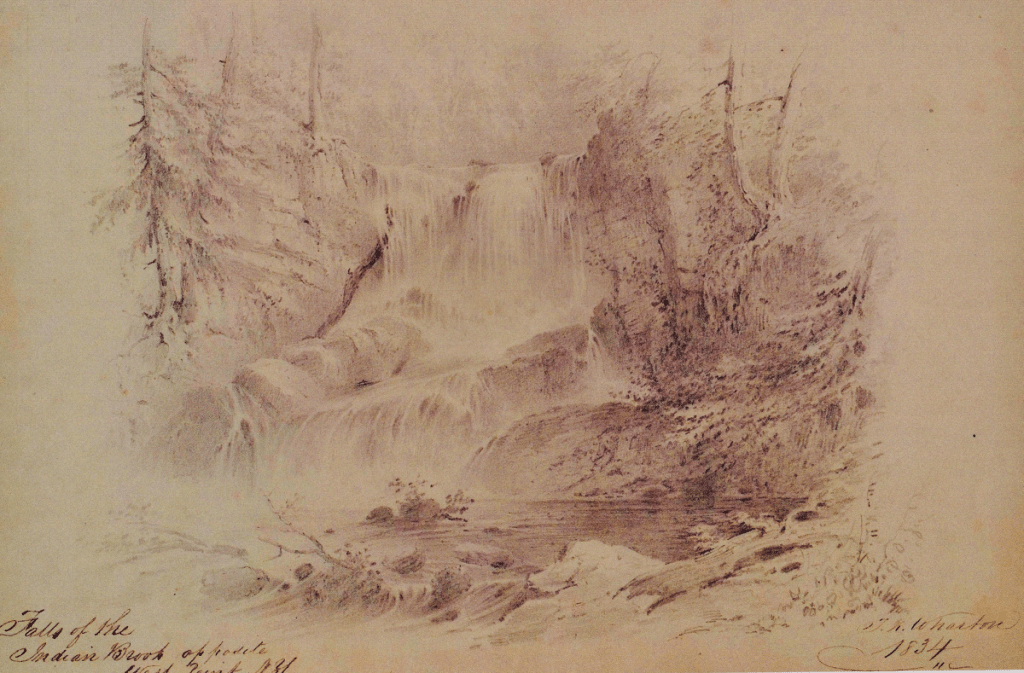 An artist sketched Indian Brook Falls in 1834, around the time  author Washington Irving led an evening jaunt there (Image courtesy of the Chapel Restoration Inc.)

Today, promoted not by a 19th-century literary light but 21st-century social media, the waterfall has become so popular that some neighbors want to seal it off.

It’s easy to find visitors near the falls. Mariah Nichols and Nick Mercado drove Nov. 13 from Poughkeepsie to hike Breakneck, but observing “like a mile and a half” of cars along Route 9D, abandoned that plan. “We like to hike quietly,” Nichols said. An internet search brought them to Indian Brook Falls. Megan Oliveri and Grace Razzuno came from Long Island that same day but bypassed their usual destination (Bear Mountain) for the waterfall. They, too, learned about it through social media.

Ten days earlier, at a Philipstown Town Board meeting, Indian Brook Road residents complained that the swarm of visitors, especially in summer, had caused numerous problems, including trespassing, and that visitors often arrived with gaggles of children or in large groups, dragging picnic coolers and swimming toys. (Swimming is not allowed at the waterfall.) 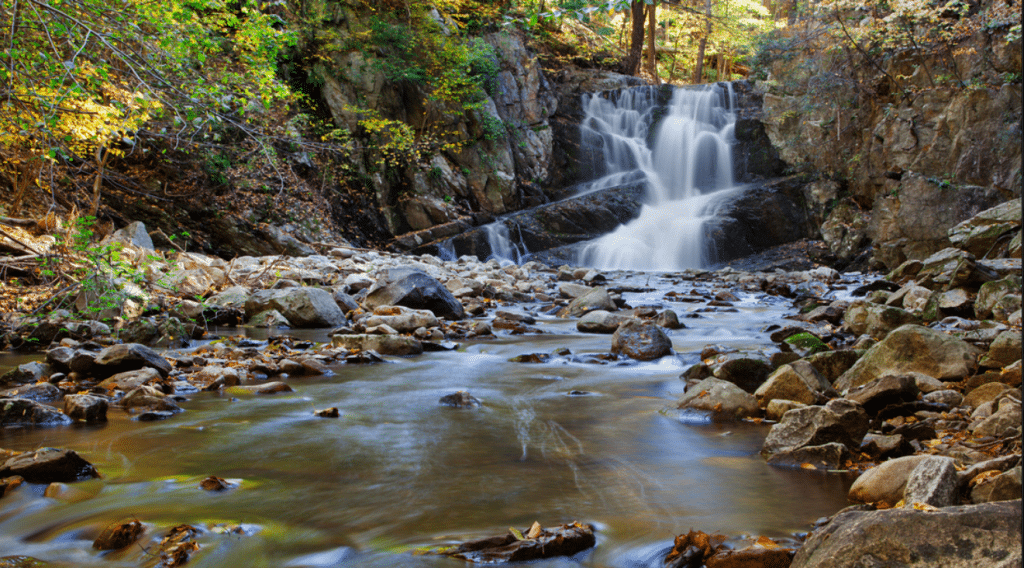 Frank Riback, who lives near the falls, proposed that authorities deny entry,  “fencing off the trail, fencing off access to the falls.” Riback acknowledged the site’s allure but predicted “it’s just a matter of time before there’s going to be a tragedy caused by the parking, the congestion, the cars.”

Another resident, Jerry Albanese, told the board that often “there are so many people in the road, so many cars, you simply cannot” drive down Indian Brook. “No emergency vehicle would ever get through,” Albanese said.

Philipstown has installed additional no-parking signs, but neighbors say drivers ignore them despite enforcement efforts by the Putnam County Sheriff’s Department. A resident told the board that, according to the Sheriff’s Department, deputies issued 111 tickets and had 106 cars towed between May and October. She said traffic is so dense on summer weekends that residents often cannot leave, or return home, because vehicles line the road and sometimes stop in the middle, engines running, waiting for a parking spot. 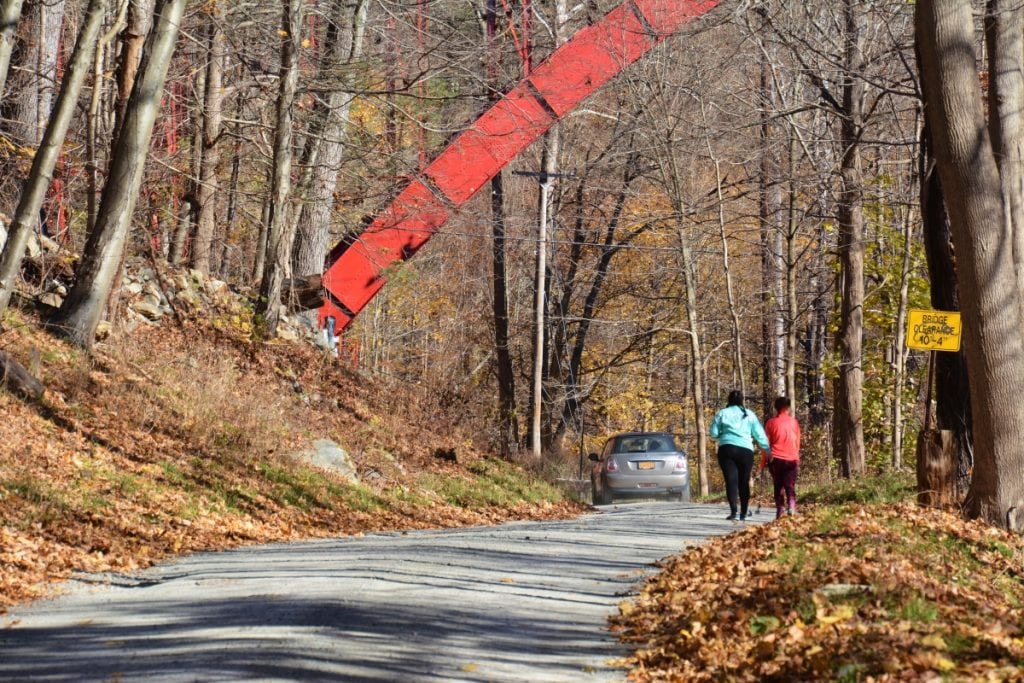 A car sweeps by Megan Oliveri and Grace Razzuno, who came from Long Island, as they head toward Indian Brook Falls. (Photo by L.S. Armstrong)

Some drivers get aggressive when challenged, residents reported. Leslie Pileggi told The Current that drivers often park alongside her home, located close to the road, blocking her egress. When she approached one, she recalled, he responded with an obscenity, asking who gave her the right to tell him where to park.

Pileggi likewise mentioned teenage boys and young men  leaping from the cliff into the water. Indian Brook Falls is “becoming a big party place,” she said. “They’re drinking openly. They’re smoking pot openly. Someone is going to end up dead.” She recommending limiting, but not banning, access.

What Brings Visitors to the Falls
Lately, some sites add words of caution

Search the internet for “Indian Brook Falls” and you’ll find a number of blogs, magazine articles and recreation sites that recommend a visit to the waterfall. In June 2015, New York magazine quoted a musician calling Indian Brook Falls “one of the best undiscovered waterfalls. You park underneath a big suspension bridge, hike for 10 minutes, and then it’s like an oasis. You can swim around behind the waterfall to sit on the rocks back there.”

Several readers objected, noting that swimming at the falls is illegal. One also wrote: “Your advice was irresponsible. There is no parking here and many of us were ticketed and also towed! Thanks tons!”

The site See/Swim review of Indian Spring Falls [sic] advised visitors to park in the Audubon Center spots. An update said the site was only a “see” location.

The mother who blogs at Cuddles and Chaos shared photos of children exploring the brook and swimming beneath the falls. “The water was crystal clear and running slowly when we went,” she wrote. “Next time, we’ll pack a lunch to eat on the rocks while we’re there.” A postscript noted: “You’re not supposed to swim there. I didn’t realize until we were leaving, but there is a No Swimming sign posted on one of the trees.” 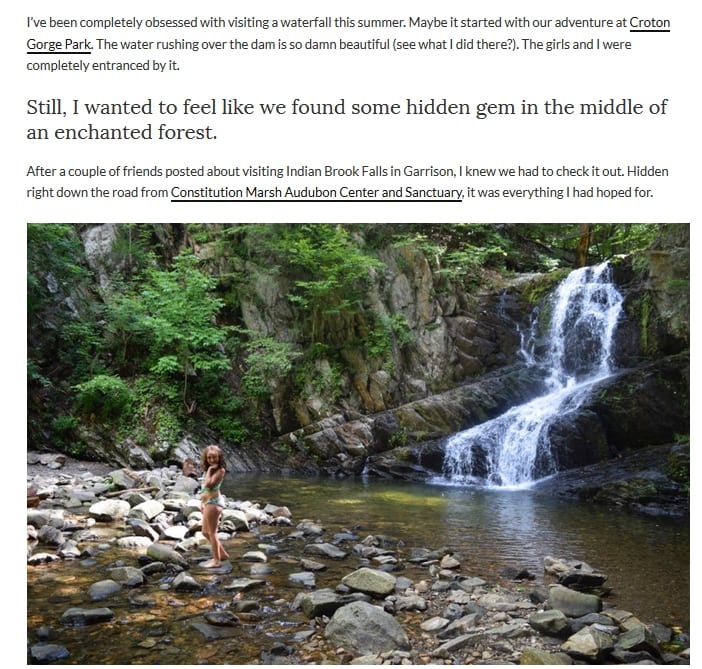 An online post extolling the virtues of Indian Brook Falls

In its review, Hike the Hudson Valley cautions: “Constitution Marsh has made the very reasonable request for folks to please not illegally swim at Indian Brook Falls while taking up a parking spot at Constitution Marsh. The falls are unaffiliated with Constitution Marsh, and the visitors’ center lets visitors park here to visit the falls out of the goodness of their hearts — a goodness that you will be testing if you leave your car parked here all day while enjoying an illegal frolic.”

Finally, the Outbound Collective calls the waterfall “a great spot for the whole family to take in its beauty” and notes the swimming ban, although a reader dismissed it as being posted only for liability reasons. “When we were leaving,” the reader wrote, “an entire coach bus showed up with children on a field trip who were going to the falls. It was one of the nicest, purest waterfalls I’ve ever been to and I plan on going back in a few days.”

Samara Mormar, another neighbor, expressed fears of harm not only to people but the land. “It’s sort of a delicate ecosystem that gets out of whack on weekends” when crowds descend, Mormar said. “My experience has been that many visitors don’t have respect for that delicacy.” 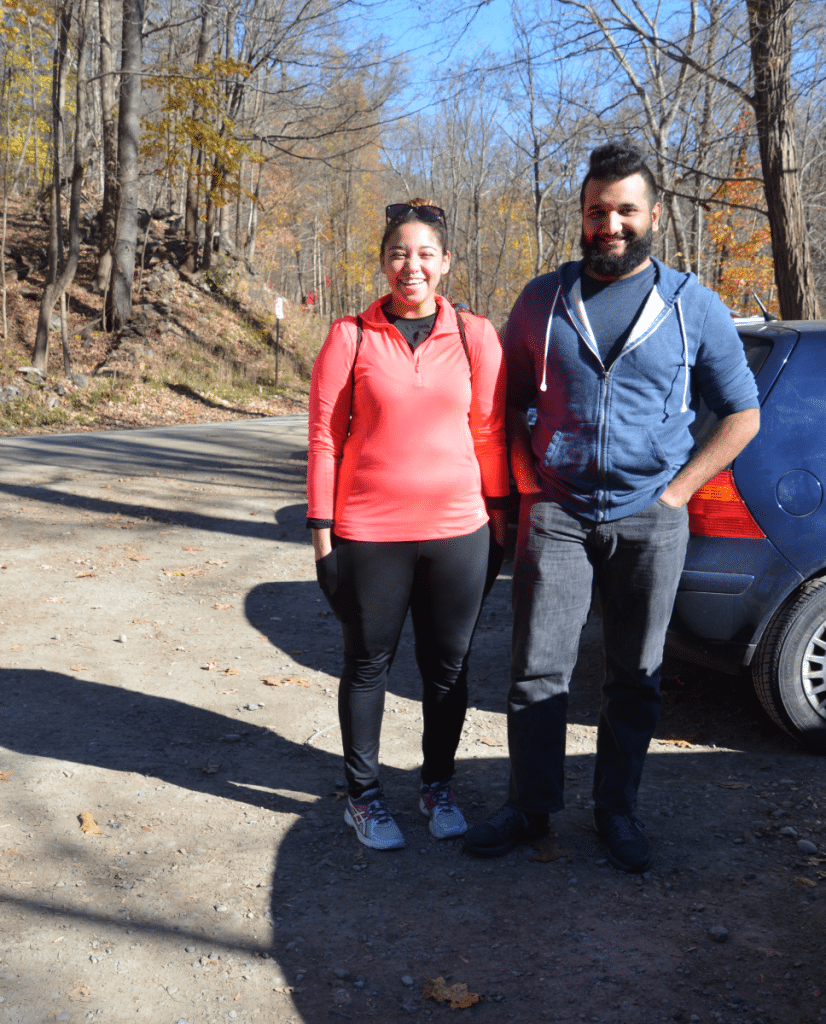 Mariah Nichols and Nick Mercado of Poughkeepsie found Breakneck too crowded on Nov. 13, so they decided to visit Indian Brook Falls, guided by social media. (Photo by L.S. Armstrong)

In an August email to state park officials, Eric Lind, the director of the Audubon Center, said that “the swimming issue at Indian Brook waterfall continues to be a stressful and difficult problem,” generating complaints “from people who want to visit the marsh but have no place to park, as our lot is full all day with vehicles from illegal swimmers.” Swimming parties also leave trash, which Audubon staff collect, he added.

Lind told neighbors he had contacted Linda Cooper, director of the Taconic Region for the New York parks department, to recommend tougher parking enforcement, more signage and “a trail closure until a permanent solution is found.”

To support their case, residents presented Town Board members with Lind’s emails and other documents. Town Supervisor Richard Shea urged more state and county action. “What we can do as a town, we’ve pretty much done,” he said. “I do think that with more ticketing and towing, eventually word will get around” on social media, blamed for spawning  the increase in visitors. 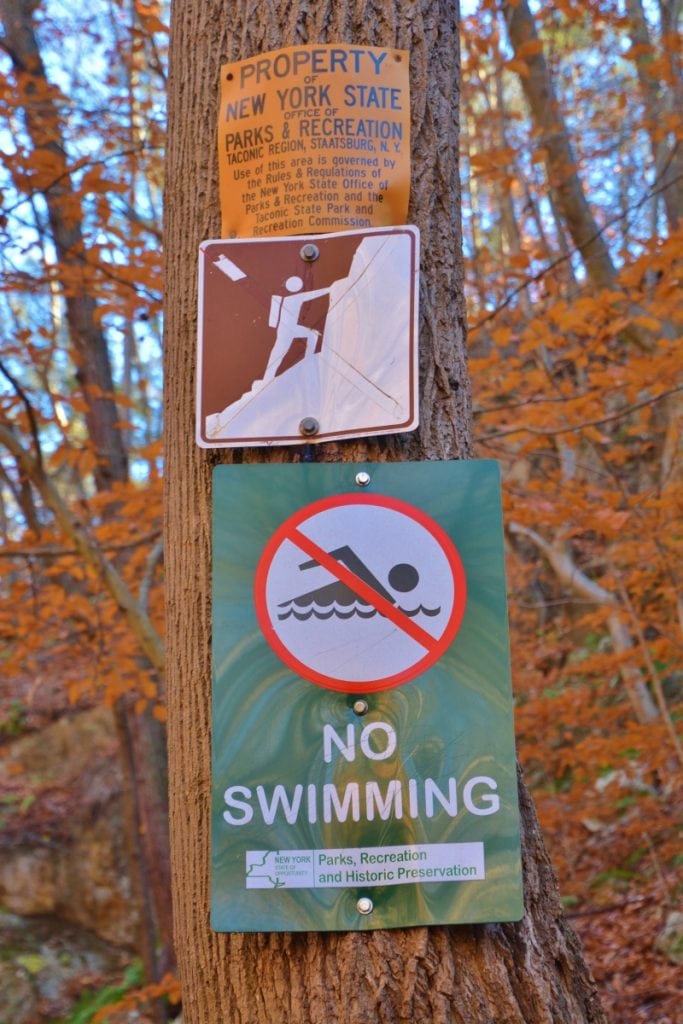 Shea likewise said the town could help subsidize more policing, “but it’s tough to rationalize, because we have so little discretionary funding. And it’s a problem that does need to be addressed by New York State.”

Councilor Nancy Montgomery said the issues extend from Indian Brook Falls to Breakneck on Route 9D and beyond. “We have our parks, our land, overrun with graffiti and garbage,” she said. (Graffiti mars the understructure of the Route 9D bridge near the waterfall.) The town can’t handle such problems at Indian Brook Falls, she said. “But are we going to be able to close it down? I don’t think so.”

Cooper said at the Nov. 3 meeting she didn’t foresee an easy solution. “We don’t want to stop access and prevent people from enjoying the out-of-doors,” she said. “But we do want to teach them an environmental ethic.”

She told residents and Town Board that “what you’ve been able to enjoy to yourselves, just the people that live here, because of social media is now being discovered and enjoyed by a much broader audience.”

“Everybody wants to strike that balance,” Shea said. “You don’t want to drive people away,” but Indian Brook Falls “is a really fragile area” and too many excursions “can overwhelm and ruin it.”