As a teenager, Tony Pena fancied himself a rock ’n roll poet in the vein of Patti Smith, Lou Reed and Jim Carroll. He took the train from his home in White Plains to hang out in the city, wearing a “long black coat with my notebook in one pocket and a bottle of Mr. Boston Blackberry Brandy sticking out from the other, hanging out at McSorleys, The White Horse Tavern and A Kettle of Fish,” he recalls with a laugh.

But he couldn’t sing so well, so he focused on words. Now, many years later, he has been named the third Poet Laureate of Beacon, succeeding Thomas O’Connell. Pena, whose two-year term begins Jan. 1, was introduced Nov. 15 at the Howland Public Library by Beacon Mayor Randy Casale. 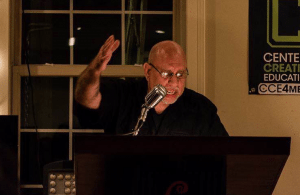 In his early years writing poetry, Pena often read at The Poetry Project at St. Mark’s Church in the East Village and submitted his work (by mail, in those days, with a self-addressed envelope folded inside for the inevitable returns) to poetry magazines like Slipstream and Poetry Space that paid in contributor copies. But, as usually happens, “responsibilities kicked in and I couldn’t play out the dream,” he recalls. “The urgency was gone and I had a drawer full of manuscripts and torn strips of paper with phrases on them.”

A billion bubbles
bounce and scatter
on the window pane
like a quick paradiddle
on a snare with pieces
of your heart beating
along in unbridled time
to a jazz wild with longing
for a poet drunk on the Eden
of your eyes to wrap you in dry
garments and cradle the scared
puppy in you during the storm.


After a second marriage and a move to Beacon in the early 2000s, Pena found his voice again, writing fiction, lyrics and poetry. In 2010 he performed his work for the first time in years at an open mic organized by Calling All Poets.

“It went well and gave me the ability to work on my old rock ’n roll aspirations, fleshing out words with performance,” he says. “My strength is still in writing, but it has value added through performances because it’s all about the passion and getting people to dig it.”

He also read his work at venues in Woodstock and Kingston and five years ago published a chap book with 18 poems, Opening Night in Gehenna. A more recent volume, Blood & Beats & Rock & Roll is available on Amazon.com. He also has made a number of videos; see youtube.com/tonypenapoetry.

Pena says he has an affinity for the gritty. “I’m captivated by the heart that beats underneath the grit,” he says. “I feel comfortable writing prose poems from the underdog perspective, trying to inhabit it.” He hopes that readers of his work find that “once it gets going, you go into this place; it’s very dark in there, you really don’t know how it’s going to come across.” 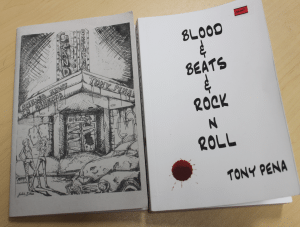 The poet says living in Beacon provides plenty of inspiration. “Beacon has always been a hardscrabble town,” he says. “It’s the common man and woman here who inspire me.” He hopes to inspire others to appreciate poetry. “Many people don’t ‘get’ poetry,” he says. “I want to foster a love of poetry from young people to seniors and don’t want them to be intimidated. I want them to see that it’s another way of understanding the world we live in. I want to put poetry where you don’t normally see it.”

By day Pena is a numbers guy, working as a government accountant. He says his dual interests may reflect his parents: his father was a Spanish-language professor, and his mother, who worked in warehouses, wrote out multiplication tables every day.

The Beacon Poet Laureate’s responsibilities are to present poetry readings at schools, the Howland library and civic celebrations, as well as serve on the committee to appoint a successor. Pena says he also would like to present workshops and readings in less traditional settings, such as the Beacon Farmers’ Market.