Beacon resident creates nonprofit to promote the right of assembly

During the day, Dan Aymar-Blair of Beacon works as a senior executive at the New York City Department of Education. But for the two hours and 20 minutes a day he’s sitting on a Metro-North train, he’s thinking about crowds.

Over the last two years Aymar-Blair has been using his commute to and from the city to research the First Amendment, specifically the freedom of assembly. He studied what civil rights groups have done over the past decade to protect the right and, during those precious moments where the train was close enough to a wi-fi signal, exchanged emails with experts on free speech. 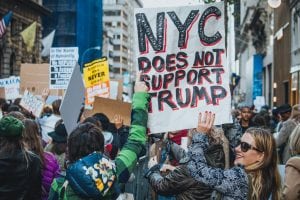 An anti-Trump protest in New York City on Nov. 12 (Photo by Mathias Wasik/Flickr)

Last month, Aymar-Blair and co-founder Patrick McEvoy unveiled the nonprofit Article 20 Network, and at 4 p.m. Sunday, Dec. 4, the group will host its first event, “A Toast to Human Rights” at Dogwood, 47 E. Main St. Aymar-Blair said he will talk about the history and importance of the freedom of assembly and describe the programming he has in mind. The name references Article 20 of the Universal Declaration of Human Rights adopted by the United Nations in 1948, which states that “everyone has the right to freedom of peaceful assembly” and that “no one may be compelled to belong to an association.” 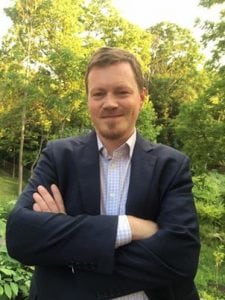 When Aymar-Blair sat down to speak with The Current about the Article 20 Network a week after the U.S. presidential election, he noted it was also the five-year anniversary of two events he said marked “the end of my street activism”: Members of the Occupy Wall Street movement being evicted from Zuccotti Park in New York City, and the birth of his first child.

A lifelong activist, Aymar-Blair said that at the time he had become disillusioned with public protests, which he called “parades without floats.”

“The police know you’re going to be there, they set up barricades, there’s a pre-determined route, you turn right here, left here, and at the end it just peters out and everyone goes home,” he said.

But the sustained encampments that fueled the Arab Spring movement and Occupy Wall Street showed ways that peaceful protests could be effective, he said. Protests by members of Black Lives Matter in response to killings of unarmed black men by law enforcement also encouraged Aymar-Blair. “We hadn’t seen an upswell of protests all across the country like that in quite some time,” he said. “Most important, it was making a difference. And the question of effectiveness was something that had been bothering me for a long time.”

Aymar-Blair initially thought he would create an app that could be used to organize protests. But making it secure would require a lengthy development cycle that made him restless. He decided to learn more about the freedom of assembly during his commute, which led him to conclude that while many groups touch on the right, there wasn’t an organization dedicated to protecting and strengthening it.

He began a correspondence with Alycee Lane, an Oakland-based author of Nonviolence Now!: Living the 1963 Birmingham Campaign’s Promise of Peace, which examines the commitment cards to nonviolence that anti-segregation protestors carried in Birmingham. Aymar-Blair asked Lane if he knew of a contemporary version, and Lane responded by creating one. It became the first project of the Article 20 Network and is provided as a free download at a20n.org. 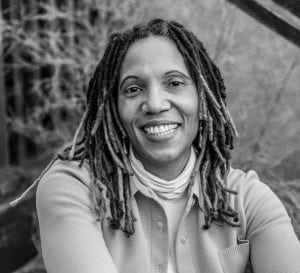 The pledge has since been retrieved more than 500 times, said Aymar-Blair, who is now working on a 10-day lesson plan for high school history classes that adheres to Common Core standards. He also is assembling resources for ministers and faith groups, a manual for police officers who must manage crowds while protecting expression, and checklists that towns and municipalities can use to safely and effectively protect freedom of assembly.

The first tweet by president-elect Donald Trump after the election suggested  Aymar-Blair and his volunteers may have their work cut out for them. 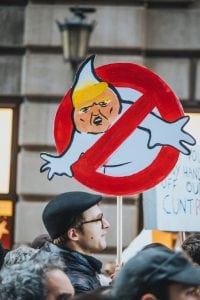 An anti-Trump protest in New York City on Nov. 12 (Photo by Mathias Wasik/Flickr)

The tweet was “chilling,” said Aymar-Blair. “It verified what we suspected his real attitude is toward the First Amendment and freedom of assembly. We’ve seen him, over the last eight months, inciting violence and encouraging violence against protesters. At one point he referred to the act of protest as ‘disgusting.’ ”

Fairness “isn’t really the question,” Aymar-Blair said. “It’s their right to protest. They could be protesting anything.”

And the protests are expected to continue. A women’s march is planned for Jan. 21 in Washington, D.C., and a monthslong encampment at Standing Rock, North Dakota, to protest an oil pipeline continues to draw attention. Aymar-Blair said that the level of mobilization taking place is unlike anything he’s ever seen, and it’s bringing new allies into the fold.

“Before the election our group was seven people, and now we’re up to 14,” he said. “People who I had been trying to get involved before the election who said they didn’t have time are writing me and saying ‘OK, I’m in.’ ”