Nelsonville’s Village Board has started discussions about whether to bring sewers to the village, where most properties use septic systems.

At its October and November meetings, the board also discussed whether the village should add two seats to the three-member board and how to address the volume and speed of traffic on Main Street.

A resident, Tommy Allen, broached the topic of sewers at the board’s Oct. 17 meeting.  “Our grounds are saturated” by overflow from inadequate septic systems, he said. “It’s bad. Health-wise, it shouldn’t be a question if you care about your neighbors, your kids.”

He suggested the village investigate grants for municipal sewer projects. For property owners, he said, “it might be cheaper” to hook up to a sewer than redoing a septic system.

Trustee Danielle Pack McCarthy said that “there’s definitely funding out there” for sewers but added that this “is one of those topics where it’s very touchy what people want, what people don’t want.” She suggested a campaign to install sewers must begin with residents.

She reiterated that point at the board meeting on Nov. 21. “What it will require is residents coming together” to ask the board to act, Pack McCarthy said. “If we don’t have people showing support for looking into it, then it doesn’t make sense to delve into” a project consuming considerable time and money. 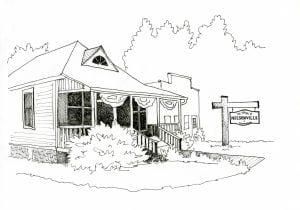 “It’s going to be pretty expensive for the average person to tie in” to a sewer system, Trustee Thomas Robertson said Oct. 17. And as a village, “you’re talking $10 million; you’re talking big numbers,” he said.

A month later, Robertson noted that the village’s annual budget is $300,000. “My feeling is most of the people here don’t want a sewer,” he said. He also questioned whether faulty septic systems are a threat. “We’ve mostly got it contained,” he said.

Likewise, he said he doubts that more than a few properties still use cesspools — underground pits into which wastewater is piped and which lack the safeguards of septic systems. An audience member observed that cesspools are now illegal.

Despite his reservations, Robertson agreed the village should investigate the possibilities for installing sewers.

One audience member pointed out that Cold Spring’s sewer system, including its water treatment plant, could accommodate Nelsonville residents. In a sense, “it’s our system,” one resident said Oct. 17. “It’s a shame we can’t take advantage of it.”

Some residents also cited ongoing and immediate concerns. One told the board Oct. 17 that his home still relies on “a manmade berm to block my neighbor’s septic system from coming over.” And in a letter read Nov. 21, a resident wondered “if the sewer expansion into Nelsonville is happening” because her family faces a costly septic system upgrade.

During the two meetings, other residents argued that if Nelsonville installs sewers, connecting should be mandatory because the lack of sewers hinders resale value of homes and overflowing septics or cesspools pose environmental problems.

Mayor Tom Corless could not attend the Nov. 21 meeting. However, in October he said that his earlier searches for sewer-related grants found only small ones. He likewise recalled that his inquiries a few years ago produced an estimate of $220 per foot to install sewer pipes, not including engineering or pump-station expenses.

Corless said that a lack of sewers “stifles our businesses. What can you have as a business where this doesn’t hurt you?” He promised to renew the search for grants and agreed that Nelsonville must pursue sewer installation as a village, as part of a long-range plan.

At the Oct. 17 meeting, Robertson proposed that the village add two trustees to the Village Board, which currently consists of a mayor and two trustees. Expanding the board would increase the capacity for tackling village work, he said. “My feeling is the village would do better.”

“The reality is it’s going to be difficult to fill those seats,” Pack McCarthy said.

Corless noted that the village previously had five trustees but had difficulty getting quorums. He suggested that if the village increases the size of the board, it gives itself leeway to reduce it again if a five-member board proves too difficult to sustain.

Traffic concerns have occupied the board as well. Pack McCarthy said Nov. 21 that 43 people answered an informal survey on whether more signage is needed at the Pearl Street crosswalk, and 33 said yes. She said she has spoken with regional New York State Department of Transportation authorities on signage “and other ways to slow traffic.”

Robertson said the village needs to conduct a thorough traffic study, optimally in conjunction with Cold Spring, and begin addressing hazards, including an increasing volume of traffic. “I’ve never seen it like it is now,” he said. “We have to get the state involved. We have to slow the traffic down.”

One thought on “Nelsonville Considers Infrastructure”