For Pride and Prejudice, Haldane students learned to speak and move like proper young men and ladies

The stereotypical teenager speaks in a barely audible mumble or returns sullen replies; a common position is slouched with phone in hand. That’s a harsh contrast to the young adults of Jane Austen’s time, when bearing, posture and diction were inculcated into child-rearing as a matter of course, dependent on one’s social standing.

That was certainly the case in England, the setting for Austen’s most famous novel, Pride and Prejudice. Taking a gaggle of Haldane students and transforming them into teenagers of the early 19th century was the challenge assigned to director Martha Mechalakos. On Dec. 2 and 3, the theatrical version of the classic book will be performed at the high school and audience members will get a look at these newly refined teens, living out the “I think I like him — no I loathe him — well, maybe he’s not what I thought” dance between the headstrong pair of Miss Elizabeth Bennet and Mr. Fitzwilliam Darcy. 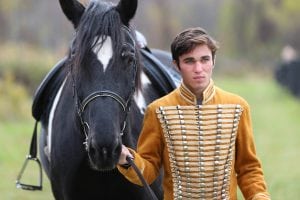 For senior Jeremy Roffman, who plays the dashing, caddish Lt. George Wickham, rehearsals have included a technical side to speech he hadn’t encountered. “The articulation of consonants, especially Ds and Ts, is of stressed importance,” he notes. “Something else we have needed to be aware of is our tendency as modern English speakers to connect and slur smaller, less significant words in conversation. For example, one of my lines reads, ‘How do you do?’ I need to force myself to take the time to pronounce each word rather than saying, ‘How d’ya do?’ Finally, because we speak with American accents, we have needed to pronounce words with rounder, warmer vowels, in order to give our lines a more British color.”

Josie Altucher, who plays Elizabeth, says she finds the language “beautiful and complex. With such intricate phrases, it has been challenging to give them a natural and honest quality. I had never realized how incredibly oblivious I was to the quality of my speaking voice.” 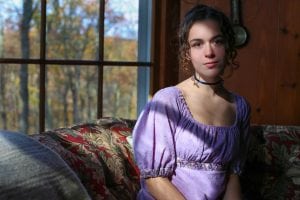 Mechalakos says she has emphasized that the actors use crisp consonants and “watch those American Rs.” She says, “Diction includes opening up the throat to support your speaking. It’s a slow, tedious process and I’m relentless. Luckily just putting on the costumes helps them with carriage and fixing their posture, and this translates over into their speech.”

Of the elegant language, Mechalakos says, “it’s not necessarily about following punctuation. A lot is about the lead-in and the set up, even the expression on your face. That allows the audience to process what you’re saying. It’s conversation, but you’re speaking it before an audience that’s not familiar with it, so you need to put a space in it to achieve clarity. The brilliance of Austen’s dialogue makes it so easy in a way. It’s fun and fast-paced.” 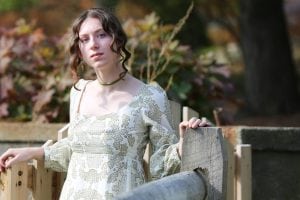 The deportment component has proved challenging to senior Amanda Erickson, who plays Charlotte Lucas. She finds herself “accidentally breaking rules from the time period. In one rehearsal Josie and I were told to act like best friends, cross the stage and sit on the couch. When I entered, Josie and I took each other’s hands and ran to the couch out of excitement. Mrs. Mechalakos told us to curtsy and walk to the couch. We all find ourselves making movements that are too modern.”

The actors recognize that although the language and customs are different, the relationships are more familiar. “We all go to each others’ houses after parties and gossip, just as Charlotte and the Bennet family do,” Erickson notes. “Elizabeth represents change. She is constantly inspiring those around her, and challenging the ideas society considered to be rules.” 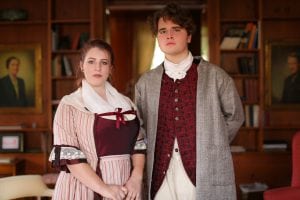 Altucher says of her character: “Elizabeth prides herself in her judgment and understanding. She is honest, witty, strong and warm. However, it is not until her misunderstandings are literally spelled out for her that Elizabeth understands the error of her judgment. We like to believe we are in control. However, life just doesn’t work that way.”

Pride and Prejudice will be performed at 7 p.m. both nights. Tickets can be purchased at the door for $12, or $5 for students (including college). Senior citizens are admitted free.