Joey Hyatt Jr., a 19-year-old member of the North Highlands Fire Company, was seriously injured Nov. 9 in a traffic accident on Route 9 near the Philipstown-Fishkill border. The southbound vehicle in which Hyatt was a passenger was struck by a northbound vehicle. Hyatt’s injuries included two broken cervical vertebrae. The driver, Dominic Chirico, and another passenger were not seriously hurt.

“Joey is quadriplegic but he has developed a bit of movement in his arms,” said Hyatt’s mother, Chrissy Smith. “We’re hopeful that with time and a lot of hard work his condition will improve.” Hyatt is undergoing intensive daily physical therapy at Helen Hayes Hospital in Haverstraw. 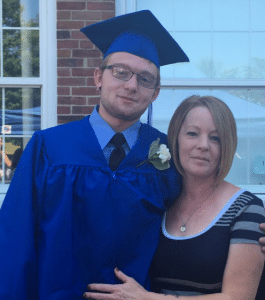 “The community has really come together and done a lot for all of us,” Smith said. “It’s fabulous.” The support has included the fire company holding a pizza night to raise money to help with medical expenses. Hyatt’s father, Joe Hyatt, is assistant chief.

The Depot Restaurant in Cold Spring, where Smith works, is planning an Eat for Joey benefit on Tuesday, Dec. 6, in which the restaurant will contribute the day’s proceeds, including from a $25 buffet that begins at 5 p.m. Employees at The Depot, which is owned by Greg Pagones, will volunteer their time and musician Mike Klubnick will perform. See facebook.com for updates on Hyatt’s recovery. A meal train has also been organized at mealtrain.com.