Haldane and Beacon both start campaigns with wins

The Haldane and Beacon girls’ basketball teams, which had been scheduled to face off Dec. 10 in Cold Spring in a game since postponed to Jan. 5, are both poised to have strong seasons.

Haldane returns all five starters from last season’s 12-win campaign that ended with a 47-31 loss to Pine Plains in the regional semifinal of the state Class C tournament.

After three consecutive Section 1 titles, the Blue Devils should have another winning season, although they face “an extremely tough schedule,” noted head coach Tyrone Searight. “The girls are working hard to improve with each practice and game to get ready for the postseason.”

In Beacon, Christina Dahl, in her 15th year as head coach, says she’s excited to get the season underway. “We have a great group of unselfish players who trust each other,” she said.

Last year’s 10-win season provided valuable lessons and playing time to a young core, she said. The approach has been to improve and get better each day to compete in Section 1 Class A with rivals Peekskill and Lourdes.

The Bulldogs started with two wins, defeating host Tappan Zee in the Tappan Zee Tournament and capturing the title with a 53-47 victory over Pelham. They lost their home opener Dec. 6 to Ketcham, 48-33, and next travel to Putnam Valley on Tuesday, Dec. 13. 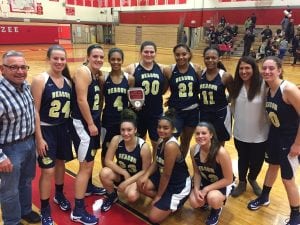 The Beacon Bulldogs after winning the Tappan Zee tournament on Dec. 3. (Photo provided)

Opposing defenses shouldn’t be able to focus solely on senior Lauren Schetter, who averaged 19 points and 12 rebounds a game a season ago and earned 12th team All-State honors, said Dahl. “We can put four other players on the court who can score, rebound and contribute,” she said.

Raven Encarncion, a transfer student, will start at point guard, while junior forward Brianna Dembo is a “double-double” threat working the pivot, Dahl said. (Dembo was named Most Valuable Player of the Tappan Zee tournament.) The team also has two strong freshman guards, Enita Rodriguez and Skyler Kurtz. (Dahl’s voice perked up when talking about her freshmen. “This team has a lot of ninth-graders who love the game and want to improve,” she said.) Dahl said she feels fortunate to have “10 committed players” who so far appear hungry to win.