Putnam County had a busy first week of December, with the passage of a law creating an animal abuse registry and a new amendment to the Butterfield lease.

During its last formal meeting of the year, the County Legislature on Dec. 6 unanimously passed a law first proposed in 2014 that creates an online registry of county residents convicted of animal cruelty and bans them from owning or controlling an animal for 10 years.

“This had been languishing in committee for two years, but I felt it was so important that it came forward,” said Dini LoBue (R-Mahopac Falls), chairwoman of the Rules Committee. “I also want to recognize legislator Bill Gouldman [R-Putnam Valley], who brought this forward two years ago in committee. I am happy to report that this evening, all of us collectively are in favor of this new law.” 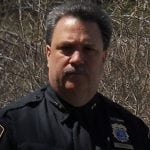 Putnam County SPCA Police Chief Ken Ross explained at last month’s Rules Committee meeting that whenever a conviction is secured, the court will send the offender’s name and photo to the Putnam office of the Society for the Prevention of Cruelty to Animals to be added to the registry, which will be available through the SPCA website. The list is not retroactive but will include only those convicted going forward.

In addition, the person must pay $50 each year he or she is listed on the registry, which will pay any costs associated with its maintenance.

Animal dealers and the public are required to check the registry before selling or giving away an animal to a Putnam County resident. If a neighbor or someone else reports a case of neglect to the Putnam SPCA, and the animal’s owner is found to be on the registry, the animal may be seized.

Ross said someone who is found to have given an animal away in good faith, but to the wrong person, can provide a sworn statement that they did not know that person’s background and avoid negligence charges.

Dawn Willis of Brewster expressed her appreciation to the legislature. “I have seen what animal cruelty looks like firsthand, and I thank you all for this registry,” she said. Willis also thanked the SPCA. “My admiration for them is limitless and they do a tremendous job that is very difficult,” she said.

Andrew Destefano of Patterson, an SPCA board member and a law enforcement officer, added his thanks for “finally putting this through and, for lack of a better term, ‘getting it.’ ” Destefano noted that those who abuse animals are often also found guilty of domestic violence and other crimes. “We have a lot of laws on the books; to put one more law on the books – it takes a lot of courage and I just want to thank you for doing that,” he said.

At its Dec. 6 meeting, the legislature also unanimously approved a seventh amendment to the lease agreement to rent space for a senior center at the Butterfield project in Cold Spring.

The amendment adds the words “and any extensions and/or renewals thereof” to the lease in a clause that requires the county to provide round-trip transportation services to “any senior citizen resident of Philipstown who wishes to participate in on-site programs.”

Carl Albano (R-Carmel) explained that the wording clarifies that if the 15-year lease for the senior center is renewed, the agreement by the county to transport seniors to the site will remain in place.

Stanley and Cicily George of Brewster and their children Acsah and Nathanael were naturalized during a Dec. 7 ceremony at the Historic Courthouse in Carmel. They were among 23 Putnam County residents who became U.S. citizens. The event was the fifth of its kind since County Clerk Michael Bartolotti brought the ceremonies back to the county after taking office in 2015. 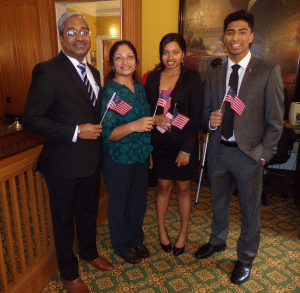